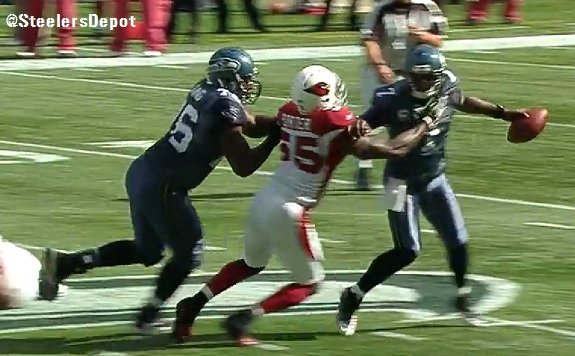 Pittsburgh Steelers outside linebackers coach Joey Porter recorded 60 sacks during his eight seasons in the Steel City. After he was released by the Steelers in 2007, he went on to play three years with the Miami Dolphins and another two with the Arizona Cardinals, and he registered another 38 sacks during those five seasons.

In today’s Steelers Thursday Throwback, we’ll have a look at Porter’s final sack of his career that came in the Week 3 game of the 2011 season against the Seattle Seahawks as a member of the Cardinals.

On the 2nd and 10 play with 4:22 left in the first half, Porter comes off the right edge and gets his hands inside left tackle Russell Okung and is then able to walk back into the pocket on his way to Tarvaris Jackson.

As you can see in the All-22 clip that I included, Porter was very active with his hands throughout the play just as he was his entire career.

Little did he know it at the time, but Porter would only go on to play in three more games and his final defensive snap of his career actually came in Week 7 of the 2011 season against the Steelers. Porter’s final career stat was an assisted tackle on running back Isaac Redman with 9:33 left in the fourth quarter.