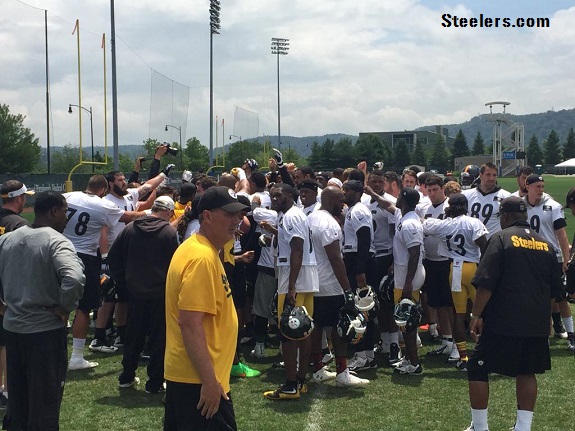 The Pittsburgh Steelers have now wrapped up their final mandatory minicamp practice of 2015 and with that comes the end of the offseason program that consisted of 12 days worth of on-field practices and one day of team building at the local Dave & Busters.

“Great finish, nice energy and enthusiasm,” said head coach Mike Tomlin at the conclusion of Thursday’s practice. “It’s really been a good offseason. This is an instructional offseason and we measure it in that way. I’m not looking for any result-oriented-like things. More than anything, it’s laying a foundation for our football team in 2015. Making sure the guys have an understanding of what we expect of them and introduced to them to how we work, the manner in which we work, the manner in which we need to work in order for us to build a successful team.”

From 30,000 feet it appears as though the last four weeks have gone extremely well for the Steelers. For starters, it doesn’t look like any players were lost to any long-term or serious injuries. Additionally, participation over the course of the offseason was fantastic.

The team will now have the next five weeks off and will report to Saint Vincent College in Latrobe on Friday, July 24. As it stands right now, it doesn’t appear as though any players will have to start off the annual event on the PUP list, but that of course can change quickly as we saw last year with safety Mike Mitchell, who injured himself while training during his down time.

Being as none of the Steelers rookie draft picks went to colleges that utilize the quarters system, all of them were able to take part in the team’s entire offseason program, so that’s yet another positive takeaway from the last four weeks.

The “football in shorts” portion of the offseason is now behind us and it’s time to get ready for the football in pads” portion. If you’re like me, you can’t wait for that to get underway.

… and that concludes the 2015 #Steelers minicamp. See everyone at training camp on July 25th. #50atSVC pic.twitter.com/xzAl81rCDI