We’ve done a comprehensive review of the Pittsburgh Steelers’ defensive struggles on first down way back in January. We’ll flip the script today and examine the team’s offense and its remarkable recent improvements.

First down effectiveness is being judged on two levels. Yards per play and first down percentage. We’ll compare the Steelers’ yearly average, dating back to 2007, with the league average in an attempt to account for any potential general upward trend in the NFL. Coming into the study, it wouldn’t be surprising to see the numbers increase as offenses have become more high-powered.

I broke it down into two graphs to weigh each statistic. Tried to incorporate it all into one graph but couldn’t get it to work. Maybe I shouldn’t have used the Kids’ Zone, “create a graph” as my tool. Seriously, that’s a thing I did. I probably shouldn’t be the mathematical spokesperson but hey, here we are.

Anyway, the results below. The blue line is the Steelers and the green the league average. 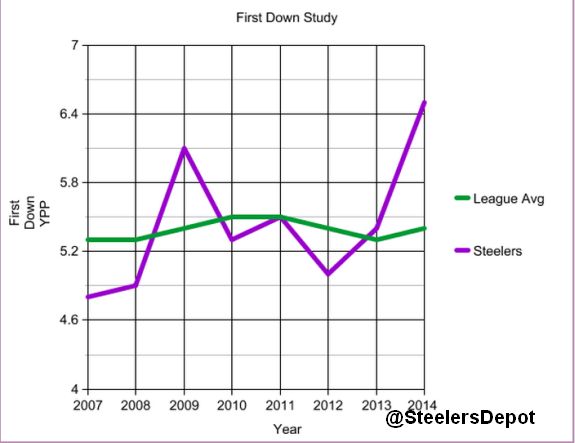 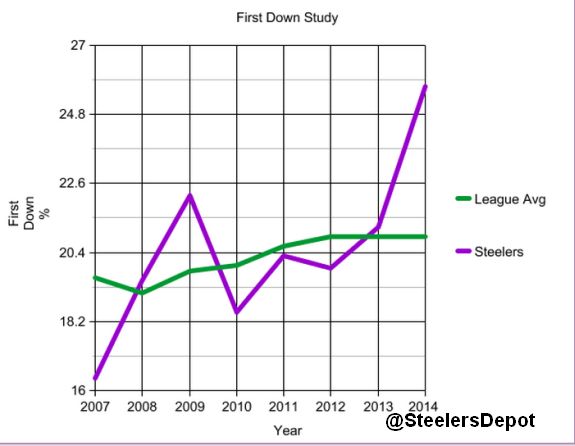 There was a general upward trend from the league first down percentage, though slight, and if anything, a downward trend from yards per carry. This is of course relatively expected, averages never tend to jump significantly the way individual numbers to, but there’s no clear indication of an upward trend to discount anything the Steelers would be doing.

After a rocky 2012, Todd Haley’s initial season, the team has been strong the last two years, including a stellar 2014 performance. The team’s 6.5 yards per play was over a full yard than the league average while its first down percentage, 25.7%, bested the average by almost five percent.

Pittsburgh has been above average in both categories in consecutive years something that only happened once under Bruce Arians’ tenure, 2009.

Over the last two seasons, the Steelers have averaged just under six yards per first down and converted 23.5 percent of the time.