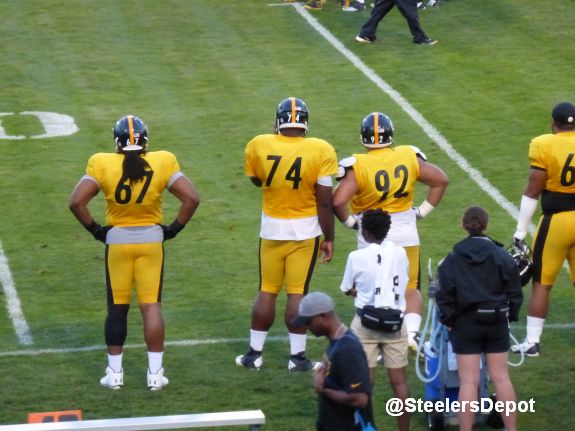 When the Pittsburgh Steelers selected Ryan Shazier with the 15th overall pick in the 2014 NFL Draft last year, it was in hopes of making him the long-term running mate to stalwart inside linebacker Lawrence Timmons in the middle of the team’s defense. Sure enough, Shazier was plugged into the starting lineup almost immediately, and, as the Steelers would soon discover, perhaps too quickly.

I’ll break down Shazier’s rookie season in greater depth next week, but suffice to say his performance was wildly inconsistent at best. While the highly-athletic playmaker certainly showed off some elite linear burst and anticipation skills, too often his lack of size and technique was a major deficiency in the run game. The rookie struggled to stack-and-shed blockers on the interior, and had his coverage skills exploited by efficient route runners in the passing game.

To top things off, Shazier was rarely healthy, appearing in just nine games due to a sprained right knee and various other ailments. Just five of those contests were starts for Shazier, who struggled to re-acclimate himself to the Pittsburgh defense or build on his learning experiences due to injuries and minimal snap counts.

Year two brings hope however, as the Ohio State product does offer elite tools and movement skills for unique usage in Keith Butler’s defense. Shazier’s work ethic and character were staples for the linebacker when entering the draft, and they’ll need to be in place again this offseason. Sean Spence and Vince Williams won’t easily surrender snaps to Shazier because of his heralded selection, so Shazier must develop consistency to frequent the field more this season.

The same can be said of Stephon Tuitt and Daniel McCullers, a pair of defensive linemen that the Steelers will pin their run-stopping hopes to this season. Tuitt showed promise as a slow-starting rookie campaign went on, but consistency was again a major issue. Rumored to be in the best shape of his life heading into OTAs, Tuitt will need to continue to impress with rare athleticism and length for the position. On paper, all the tools are there, and if the play recognition and instincts are flowing in 2015, that results could be devastating for the opposition.

Pittsburgh would like nothing more than to see McCullers eventually play his way into the starting lineup over Steve McLendon, who will be a free agent this offseason. With the Steelers already looking to pay Cameron Heyward and Kelvin Beachum by next spring, retaining McLendon could be a difficulty circumvented if McCullers steps up in 2015.

The hulking nose tackle from Tennessee (6’7, 352) managed just one start last season, but flashed ability during a limited snap count. With just Cam Thomas, the unproven Clifton Geathers, and rookie L.T. Walton in the rotation behind the starters after McCullers, the second-year lineman’s role becomes even more vital in 2015.

Gone are old defensive stalwarts Ike Taylor, Troy Polamalu, and Brett Keisel. James Harrison is back for one more run, but the leadership of the defense has been turned over to veterans like Heyward and Timmons for the foreseeable future. While those two names may resonate in the locker room, on the field the team will need players to begin to step up and play consistently sound football alongside their studs. That boost could come from many spots along the defense, but the roles of Shazier, Tuitt, and McCullers could truly make of break the Pittsburgh defense this year, especially when defending the run.

That is where the story currently sits for all three 2014 defensive prospects as they enter their sophomore seasons in the NFL as healthier, smarter, and better football players. Their development will be watched closely all year, as that progress could be crucial to the defensive revival that must occur for the Steelers to make a deep playoff run in 2015.