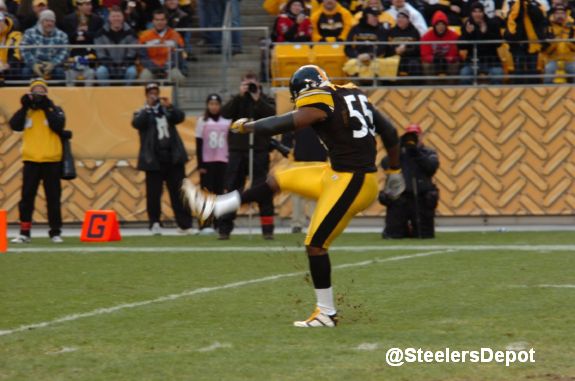 Steelers.com’s Bob Labriola tackles maybe the most difficult position today, selecting the Pittsburgh Steelers best linebackers from 1992 to the present day. As we’ve done with each installment, we’ll give you his picks, explanations, and react to them at the end.

Linebacker: Greg Lloyd – “When asked which of his former players he would school-yard-pick first around whom to build a defense, LeBeau immediately said: Greg Lloyd. ‘Greg had a no-nonsense approach,’said LeBeau, ‘that seemed to permeate the rest of the group.’”

Joey Porter – “Porter finished his eight seasons in Pittsburgh with 60 career sacks, which ranks fifth on the team’s all-time list. He also had 10 interceptions and eight fumble recoveries, which he turned into four touchdowns.”

James Farrior – “In the immediate aftermath of [Jerome Bettis’ fumble in the 2005 AFC Championship game], the potential for an emotional collapse on the Steelers sideline was very real. Dick LeBeau said he looked down for an instant and when he picked up his head to check his defensive-call sheet, Farrior was standing in front of him with his helmet already on, chinstrap being snapped.”

James Harrison – “Harrison read a Kurt Warner tendency and dropped into coverage instead of attacking the backfield, made the interception, and then ran and willed himself 100 yards for a touchdown that gave the Steelers a 17-7 lead.”

So close, Bob. Porter, Harrison, and Farrior would be on my list, but three outside linebackers? What kind of defense are you running? Labriola only addresses with a caution-to-the-wind “let the coaches figure it out” when referring to who who will play inside linebacker alongside Farrior.

The entire point of the exercise, especially this position, is to make a difficult decision. Porter and Harrison are my selections because their play led to Super Bowl victories, Porter’s dominance against the Colts in 2005, Harrison’s aforementioned 100 yard interception return. Lloyd, as great as he was, never produced that.

I know picking the best linebackers is like picking favorite children but you’re getting paid to pick your favorite ones here. Unless you’re running for office in 2016 – you still have my vote, for the record – there’s no need to be politically correct. You’ve taken the mystery out. Put Lawrence Timmons on there as the other inside linebacker like he deserves to be.

Though he only played with the Steelers for four seasons, a brief stint in 2005 notwithstanding, Chad Brown deserves a mention on his “Others to Consider List.”

Agree/disagree with his (or my) comments? Let us know below.