It’s one of my favorite things Todd Haley asked his offense to do last year. We hear about versatility in a lot of respects from the Pittsburgh Steelers; Le’Veon Bell’s receiving skills, offensive lineman capable of playing several positions, you get the idea. However, one of the underrated requirements of that versatility are its receivers being able to play multiple spots.

We’re going to highlight that today. With examples all from one game, Week 16 against the Kansas City Chiefs, we’re going to show Martavis Bryant, Antonio Brown, and Markus Wheaton in the slots and the advantages it brings.

Our first example starts with Bryant. Ideally an outside receiver, putting a nearly 6’4 player into the slot creates a natural mismatche. Here he is against the 5’10, mediocre Chris Owens. 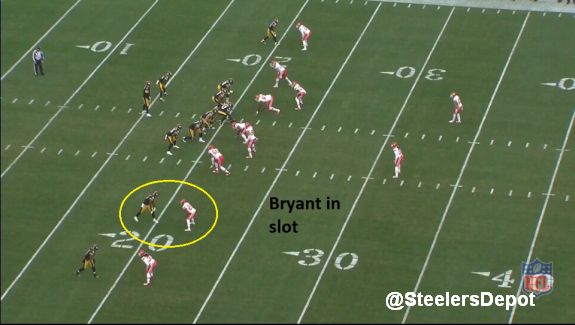 Bryant does a great job winning off the line. As you can see above, Owens is lined with an outside shade, meant to force Bryant to win inside in order to funnel to the deep safety. The receiver’s initial stem is inside, getting the corner to punch with his outside arm. He’s able to stem back outside, breaking through Owens’ arm. 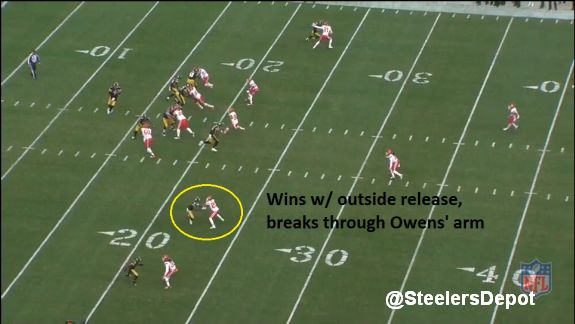 Gets his hips even with the nickel corner and as the saying goes, if he’s even, he’s leaving. That’s what Bryant does, doing a nice job of getting wide to run away from the safety and create extrea separation from the corner. Ben Roethlisberger throws it right in the bucket and it’s a 44 yard gain on 3rd and 4. 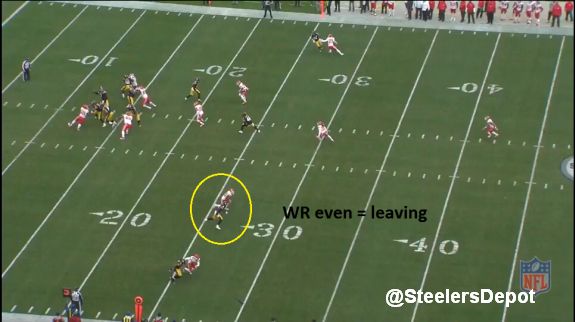 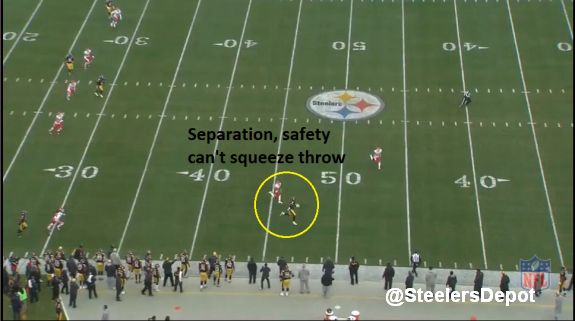 The lesson? Two-fold. Putting a tall receiver against a slot corner, who are typically smaller to defend your traditional quick-twitch slot players, is a natural matchup win for the offense. Moreover, the ability to play out of the slot makes it much more difficult for corners to leverage you.

If a receiver is lined out near the numbers and the cornerback is playing with inside leverage, the defender has the advantage. He can make it difficult for the receiver to win inside, forcing him outside, and pinned to the sideline. The slot gives the receiver a lot of horizontal space and that’s optimal against press coverage.

The next example comes from Markus Wheaton in the third quarter. Wheaton initially lines up as the slot though with Antonio Brown’s jet motion on the fake jet sweep, he becomes the lone receiver to that side and winds up matched up versus the outside corner. 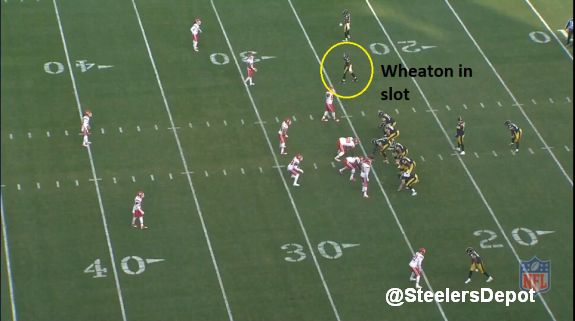 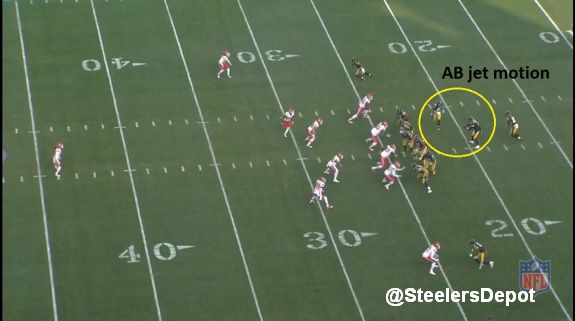 Wheaton runs an out route, selling vertically to get the corner to open up, for the completion. 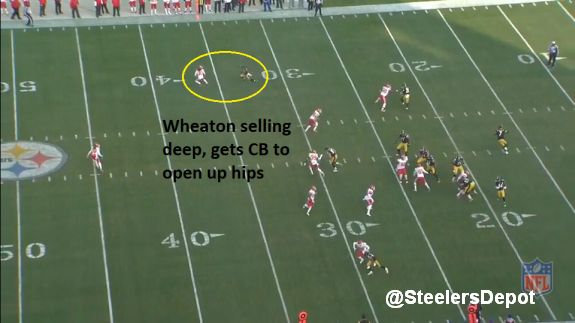 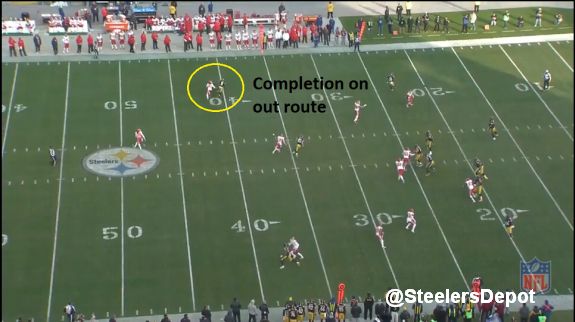 The lesson? Running an out route means the receiver has to reduce his split. Can’t run it from the numbers or you’re going to run out of space. Being able to play in the slot opens up the entire route tree.

Our final comes on third down in the fourth quarter with the Steelers leading in a one-possession game. Antonio Brown is matched up in the slot against Owens. 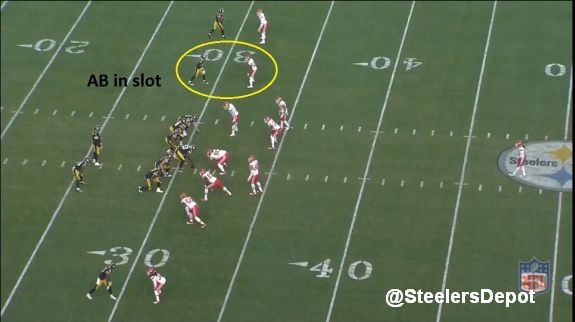 Easy win for one of the best receivers in fooball, getting on the corner’s toes before breaking on the slant. It’s no contest. Owens doesn’t help himself by lunging on his punch, either. 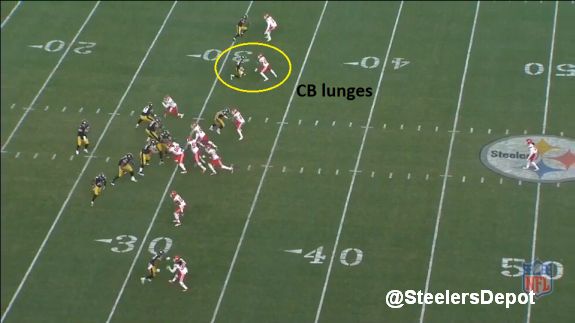 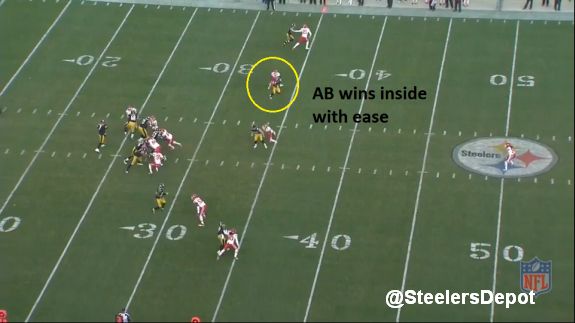 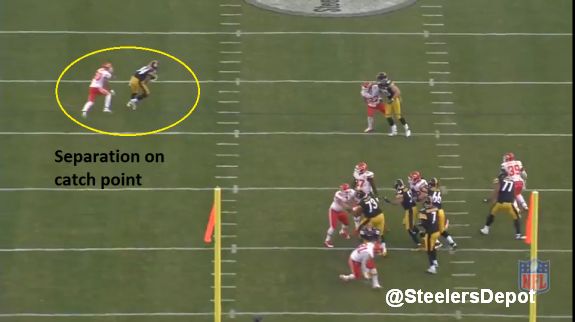 The lesson? Move around your fiercest weapon, avoiding their toughest corner and putting him on their #3. If a team philosophically won’t shadow, you can make them regret it with these types of plays.

There will be debate about who the #2 WR is between Bryant and Wheaton. And over if Wheaton is best for the slot. And where Sammie Coates fits best. The reality is the lines have blurred between the pecking order and the positions. The Steelers have placed an emphasis on moving pieces around, giving defenses different looks even with identical personnel groupings, and never letting the defense get comfortable with what they’ll be seeing.

It makes a potent offense that much more lethal.