There were some common complaints Pittsburgh Steelers’ fans would bring up over Dick LeBeau’s defense. Maybe none more frequent than the frustration some had over the cushion the cornerback’s gave.

I’ve always been comfortable with giving the cornerback that space and today, we’ll show another example of why.

This cushion allows the receiver to read the backfield, keying him in on what the concept will be without ever staring down the receiver. There are three areas to watch.

1. Run/pass keys
2. Drop of the quarterback
3. Additional tells by the lineman to determine route concept

Backing up, let’s see how those clues proved vital on these third quarter play against the Kansas City Chiefs in Week 16.

Kansas City uses 21 personnel with a twin set to the left. Steelers, for reasons unclear, stay in nickel. Brice McCain defends the slot with William Gay in coverage at the top of the screen. 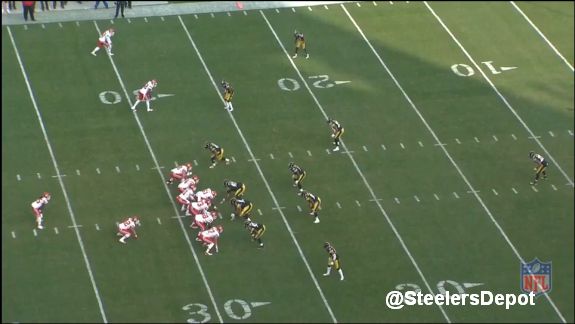 There have been more pronounced cushions but by the snap, each corner has given up roughly five yards of space. The important thing to notice here is where their eyes are at. Not on the receiver. They’re firmly planted in the backfield at the quarterback.

A short aside, this ability peeking into the backfield is only made possible by the split safety help over the top. Will Allen rotates to the deep half to carry any vertical concept. With a single high safety, as the Steelers often use, there must be either a much greater cushion or you can’t look into the backfield like this. 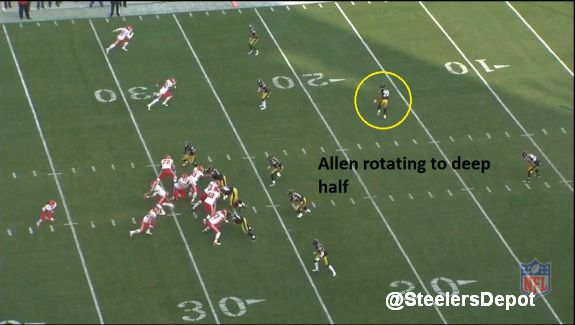 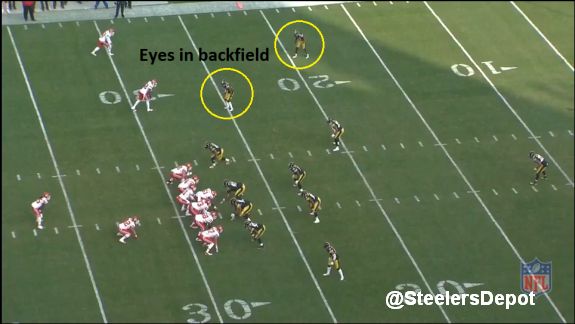 The half-hearted playaction doesn’t fool either corner. It’s an obvious pass key. Alex Smith quickly pivots, his drop associating with the routes common to the three step game (slant, quick out, swing). What further helps indicate a quick throw is the cut block from left tackle Eric Fisher. Not going to cut if your quarterback needs time in the pocket for the route to develop. All these are clues to the defensive back without ever directly putting his eyes on the receiver. 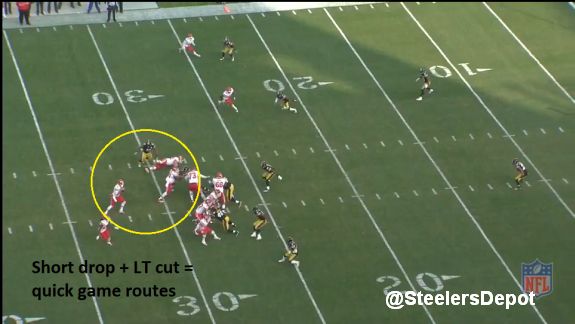 Film study likely also plays a factor considering a twin set isn’t the most common formation. Odds are good the Chiefs had run this before.

Back to the play. By design, both receivers are set to run slant routes. Three step drop, get the ball out quick, make the catch on the move.

The two veteran cornerbacks click and close to break on the slant and play it better than the receivers. There’s no way Smith is going to be able to make the throw. 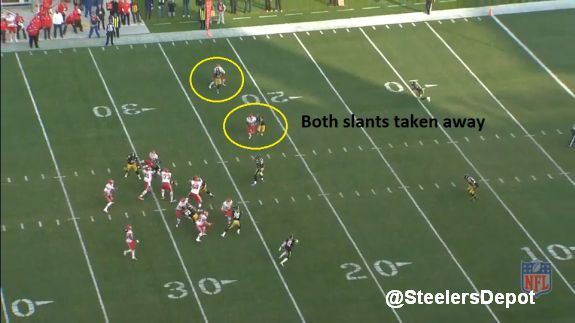 With James Harrison, getting off Fisher’s cut block without issue, barreling down on him, the quarterback is forced to move to his checkdown option, dumping it off to Jamaal Charles. Stephon Tuitt winds up showing tremendous hustle to chase the ball and knock the ball out, recovered by Vince Williams. 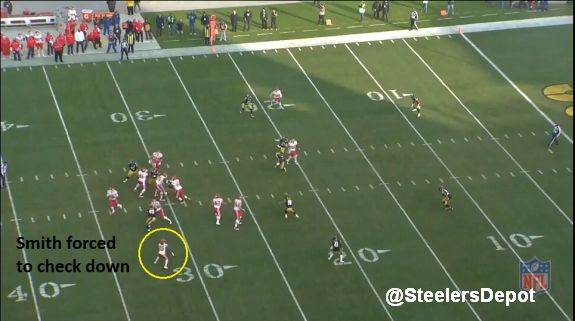 With the Steelers holding onto a 10-6 lead, it’s a big play. Pittsburgh would eat up nearly the rest of the quarter and score, sitting in the driver’s seat the rest of the game. They would win 20-12.

If the team was playing tight, press coverage, there isn’t the opportunity to look in the backfield. You’re fighting with the receiver, trying to jam him at the line. And once he crosses your face, you’ve given up leverage and will struggle to break up the throw.

It may be frustrating at times to see this off coverage when teams like the Seattle Seahawks are bumping and running the entire game. Off coverage isn’t as beautiful but let’s players exercise their minds than their muscle. Sometimes, that can produce an even better result.