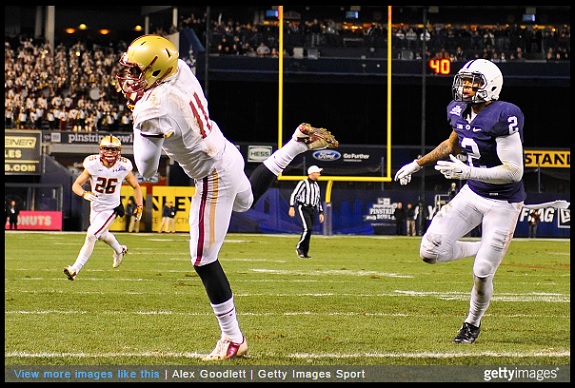 Even transferring twice isn’t unheard of. But twice and go back to the school you originally committed to? For me, that’s a new one.

He is literally one of the last men on the roster, signed to the club on May 12th to a futures deal. That makes him easily forgotten to most, pawned off as a camp body. How quickly forget these are players who at one point, were dominant figures in college or high school.

That was Phillips leaving DePaul Catholic. A four star prospect, Rivals named him the fifth best receiver in the country and the number one receiver in New Jersey. A quarter of his 40 junior  year catches found the end zone leading to over 25 schools showed interest. In September of his senior year, Phillips verbally committed to Boston College and shut every other school out.

His senior season was slightly quieter but his talents were recognized, the only player from New Jersey to participate in the 2010 U.S. Army All-American Bowl.

After seeing little time on offense his first year in college – one catch for nine yards – and a change in offensive coordinators, Phillips was sent scrambling for the list of teams who sent letters and offered scholarships. He would later admit he “jumped the gun” on choosing Boston College so early in his recruiting process.

Citing an affinity for the coaching staff, Phillips moved onto UConn, but was forced to sit out the 2011 season. His two years of eligibility would result in modest numbers of 60 receptions and four touchdowns. There, he would meet his girlfriend Bria Hartley, who won two titles under Geno Auriemma and is now a guard for the WNBA’s Washington Mystics.

Since Phillips earned his diploma but still had a year of eligibility, he pursued being a graduate student. This also mean he could circumvent the NCAA rule for sitting out a season.

With new head coach Steve Addazio in place, Phillips made the decision to return back to where he came – Boston College. He officially announced the decision on the Fourth of July of last year. In his final season, he averaged well over 20 yards per catch but only started three games and played on a team who only threw the ball when they had to.

A 4.45 40 and 39 inch vertical was not enough to salvage his draft stock and Phillips went undrafted. But the triangle numbers were interesting enough to warrant a spot on an NFL roster.

His height on the Steelers’ website is a bit exaggerated – listed at 6’3 but reportedly weighed in at his Pro Day at 6’1. Still, that’s not exactly small and with his vertical and proven penchant for finding the end zone, makes him an appealing vertical threat.

No matter where this path leads him, he’ll get to experience it with a teammate. Tyler Murphy was his quarterback in 2014 but now, with Murphy moving to WR, they’ll be running routes together.

There’s zero question Phillips is a long shot. There will be a strong push for the final spots on the 53 man roster with the losers likely ticketed for the practice squad. Phillips isn’t even in that conversation. He’s just trying to make a play, make a name. But each of these receivers, C.J. Goodwin, Eli Rogers, Murphy, have something unique about them. It’ll make a great competition in training camp. That’s all you can ever ask for.