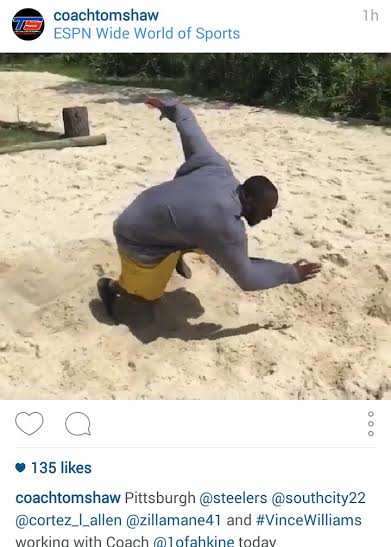 Mike Tomlin has made it perfectly clear he wants players in the best shape of their lives coming training camp and four Pittsburgh Steelers have heeded that message.

On his Instagram, well-known trainer Tom Shaw sent out a video of Cortez Allen, Antwon Blake, William Gay, and Vince Williams working with him and former cornerback Ike Taylor.

Taylor trained with Shaw almost every offseason so it’s no surprise to see him back down in Florida helping out. Shaw is best known for training players to become faster.

“Tom Shaw doesn’t believe running fast for long distances does football players any good. He says he could spend “15 straight days running the dog out of football players” and they’d just get well conditioned—but not faster. Tom’s logic on this is spot-on: On the football field, the longest play is six or seven seconds so training long is a waste. Instead, Tom drills his players in the vertical jump and the standing long jump. “If we can increase these two things, you’ll be faster in the 40-yard dash,” according to his website.

Many Steelers have already made it known they are training at high-performance facilities. Kelvin Beachum is working at LeCharles Bentley’s Academy and James Harrison is working at Performance Enhancement Professionals.