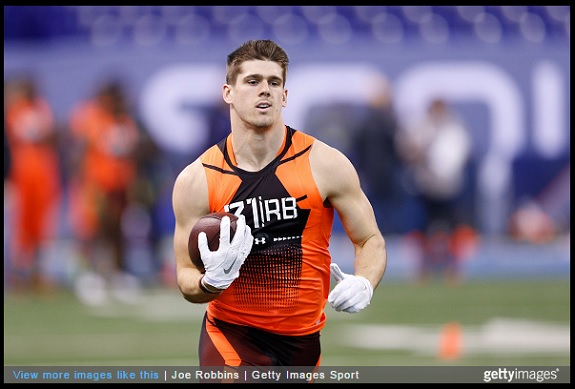 Versatility is a trait of growing importance when it comes to the running back position in the NFL, the value of which the Pittsburgh Steelers certainly know thanks to the threefold contributions of Le’Veon Bell as a rusher, receiver, and blocker. Bell’s versatility allows Pittsburgh to not only have one of their best players on the field at all times and situations, but it also opens up the creativity of the offense for coordinator Todd Haley.

When Pittsburgh signed DeAngelo Williams to back up Bell this offseason, that versatility was undoubtedly on the minds of the front office again, as the wily veteran has proven himself to be a capable receiver over his career, with 178 catches in nine seasons. Williams wasn’t asked to be near the receiver Bell has been over the past two years, but he always performed admirably in the department when called upon.

That brings us to Dri Archer, whose positional flexibility is so apparent that he may as well be listed as an offensive weapon rather than a running back. Archer, who was used in a plethora of ways by the coaching staff at Kent State, caught 12 touchdowns over his four years of college football, showing the type of versatility Pittsburgh has come to value in their backs.

So if a fifth back is to make the Steelers roster (counting Will Johnson of course), that valuable trait could come in handy when it comes to the battle between Ross Scheuerman and Josh Harris. Scheuerman, a rookie from Lafayette College, may as well have the middle name “versatile”, boasting plenty of ability as a receiver while in college.

An all-purpose monster who averaged over five yards per carry during his junior and senior seasons, Scheuerman utilized his 6-1, 205-pound frame to reel in 129 passes in four years, including a whopping 57 catches during his final campaign. That staggering number comes in just 11 games, meaning Scheuerman was averaging over five catches a game from the running back position despite clearly being his team’s top offensive threat.

Harris’ 47 career college catches pale in comparison, but that isn’t to say that the Wake Forest back is a poor receiver. He simply hasn’t had near the experience or diverse usage that Scheuerman has enjoyed over his young career, as a receiver or a return man.

That’s right, Scheuerman also offers an impressive resume in the return department, where he brought two kicks back for touchdowns in just 72 attempts. Because of his value to Lafayette’s offense Scheuerman was rarely allowed to return kicks as his career progressed, taking just four kickoffs as a senior, one of which he still managed to get into the end zone. Harris’ 11 college kick returns that averaged almost seven yards less per return than Scheuerman’s (16.5 to 22.9) again can’t compare, firmly giving the versatility edge to the rookie.

Harris does have the advantage in the experience department however, a powerful tool when it comes to competing with a first-year running back hailing from a small FCS school. The Steelers will value that experience, especially if Archer’s struggles as a rusher continue into the summer.

Still, there are few more valuable traits at the running back position in today’s NFL than versatility, and that is an edge Harris’ simply cannot gain on Scheuerman. In the end, it might be enough to win the young rookie a job over the stocky veteran.