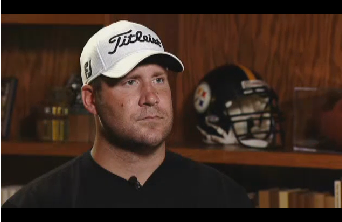 CBS in Pittsburgh’s Bob Pompeani sat down with Pittsburgh Steelers’ quarterback Ben Roethlisberger for an exclusive, 15 minute interview, which we’ll link at the bottom. The interview ran the gamut from this upcoming season, league rules changes, past and present teammates, and life as a father.

The Steelers’ offense may have scored a team-record 436 points last season, but as you’d expect a quarterback to say, and in line with what Mike Tomlin has echoed in the past, Roethlisberger believes the offense can improve.

“Well we still feel there are a lot of areas for improvement. We had some guys who had some unbelievable individual season stats. But collectively as a unit, we still feel like there’s growth. We can get better on third down, we can get better in the red zone, we can score more points. I think that’s our goal, just to continue to improve. Just get better all around as a group.”

Pompeani asked for Big Ben’s opinion on the new extra point rule, moving the kick back to the 33 yard line, and like many fans, Roethlisberger wasn’t particularly thrilled with the change.

“It’s different. I’m one of those guys if it’s not broke, don’t fix it. I didn’t think there was anything wrong with kicking the extra point. But I think it will show who are the best of the best kickers are because we have a kicker who I think is one of the best in the game. He’s going to have to prove it in December and January when there’s 40 mph winds and it’s snowing and raining. He has to kick an extra point to tie or win the game from 33 yards where there’s a guy in a dome or down south where the weather’s perfect and that kick is easy. It just makes it tougher on the people who play in bad weather.”

The franchise quarterback also dropped a nugget of information to stash away. In anticipation of going for two more often, he noted the team started every practice during last week’s OTAs on the two yard line.

Roethlisberger was also asked to weigh on the contract situation of Antonio Brown and the suspension of Le’Veon Bell.

“I talked to [Brown]. When we went down to Georgia, we talked. I agree with him, I know what he’s saying, he has outperformed his contract. He’s the best in the league. That being said, he has a contract. He understands that, he knows that. I don’t think there was any chance he was holding out. I believe him when he tells me that. I think it was, in part, mostly his agent, probably positioning, playing in the media game, doing all the stuff he needs to do. Did it make AB look good? No, but it is what it is.”

Brown’s agent is Drew Rosenhaus so it wouldn’t surprising in the least to think he was posturing for the chance at a better deal. It seems obvious now the worry about Brown holding out was severely blown out of proportion and to hear Roethlisberger tell it, Brown himself said he never intended to holdout.

On Bell: “That hurts us. He’s one of the best in the league, probably the best all-around back in the league. He’s a big part of our offense so however long he’s going to be gone, we hope it’s short, and I know he’ll be ready to go when he gets back.”

Big Ben was vocal on his thoughts on what Jerome Bettis meant to him and in his opinion, overdue induction into the Pro Football Hall of Fame.

“When they say ‘Jerome is going in, what do you think?’ I say it’s about time. I think it’s long overdue. For the type of player and person he was class act, a guy who meant the world to me, from the first time I walked in this door to the he walked out. And even to this day as the friends that we are. He brought a smile to your face. He was such a competitor, a leader, a guy you could look up to, and I’d honestly think, what would Jerome do in this situation how would Jerome handle this as a leader, as a football player, as a man. Nothing but the utmost respect for him. I was honored he sent me an invitation to the Hall of Fame ceremonies and the parties.

I thought he should have been in awhile ago. I really do. Like I said, he deserves it. Everything he did on the football field, spectacular, but just as much as a man and the person he was off the field, everything he meant to the NFL and to the Pittsburgh Steelers. This is long overdue.”

More importantly than football, Roethlisberger is a dad with two kids, and Pompeani got his thoughts on what his kids have taught him and how he can apply it to football.

“Just being more patient…I don’t think any of us are [as patient] as younger people. As you get older, you naturally have to have patience, and you have to have patience with kids. With whatever it is, my son wants to put his shoes on himself, it may take him a little longer than if I put them on, but you sit and you watch and you learn. And I think it’s helped me become a better leader with some of these young guys on the football field.

The interview wrapped up with some of Roethlisberger’s thoughts and expectations heading into the new year.

“I like the team we have. I think we’re a very talented team. We have everybody coming back on offense. It’s always about injuries…obviously we looked at the schedule, toughest schedule in the NFL. It’s all there for us, the pieces are there, we just have to put it together and play together as a team and stay healthy.”

Check out the full interview for his comments on his contract situation, if he’d let his son play football, and if your thirst still hasn’t been quenched this offseason, Roethlisberger’s comments on Deflategate.