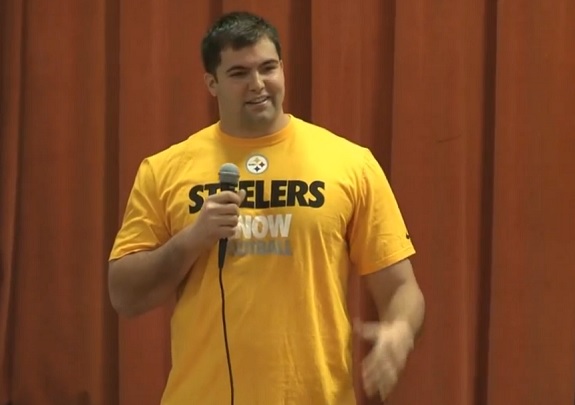 When you have a guy on the roster with the backstory of Alejandro Villanueva, it’s essentially a given that he will become a fan favorite regardless of his potential. As a former Army ranger who has served overseas, one would figure that he should have little trouble “riding the emotional rollercoaster”, as Pittsburgh Steelers head coach Mike Tomlin likes to say.

Villanueva is also an intriguing physical specimen, having come out of college as a tight end only to be tested as a defensive end last season at the age of 25 with the Philadelphia Eagles. At 6’9” and weighing in the mid-270s, the Steelers were intrigued enough by Villanueva when the teams played during the preseason that they signed him to their practice squad after he was waived.

But rather than as a defensive end, Villanueva was brought on board in order to be given a shot as an offensive tackle, which means that he has had to pack on the pounds as part of his growth and development into his new position.

The Steelers gave him ample opportunity to do so, leaving him untouched throughout the entire season, allowing him to be weaned into his new role on the practice squad in the hopes that, perhaps in a year, they might have something that they can work with.

There’s certainly more of him to work with now than there was back in September, to be certain. While reports vary, they all suggest that the 26-year old has added significant weight since then. Listed at 277 on the Steelers’ official roster, currently, that is certainly no longer the case.

Villanueva recently granted an interview with the National Catholic Register, in which he is described as being at 330 pounds, although that number is not verified. Alternatively, I have also seen him at 320 pounds.

More recently, and perhaps more realistically, Bob Labriola recently mentioned Villanueva during a Steelers.com live segment, describing him as at “about 290ish” pounds. I would imagine him to be within the 300-pound range when considering the variety of these reports, but it will be interesting to see how he is listed once the roster is updated.

The reason that Labriola brought up Villanueva, however, is because Tunck Ilkin brought him up. As I’ve previously written, offensive line coach Mike Munchak has brought in Ilkin to work with the linemen once a week on their technique. Labriola talked to Ilkin about that recently:

“One of the guys that I was talking to Tunch about that he seems to think is really improving a lot, showing a lot, is Alejandro Villanueva. … This guy I think has the potential to be something special”.

Those who follow my writing likely have gathered that I tend to skew toward realism in my efforts to remain objective, and for that reason I’ve not much discussed Villanueva over the course of this offseason, let alone tried to project what the future might hold for him. But even I can’t ignore that everything so far has sounded positive, even if he will turn 27 in September.