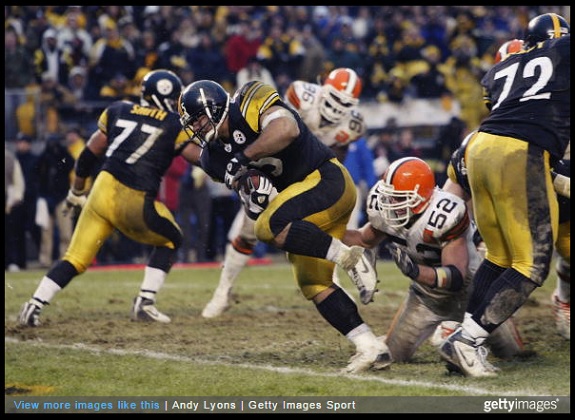 A sixth round draft choice out of Utah in the 1998 NFL Draft, I can still hear the chants of “FUUUUUUUU” being rained down at brand-new Heinz Field in the wee stages of the 2000s. A 6-foot, 252-pound battering ram of a running back, Chris Fuamatu Ma’afala was the backup to icon Jerome Bettis, forming a double-trouble “earthquake and typhoon” tandem at the position, although it was clear “The Bus” was the top dog. That is until the 2001 season when injuries struck, and Fuamatu Ma’afala had to take on a larger role.

That year, he ran for 453 yards and 3 touchdowns, with arguably his finest game as a pro coming in week 15 in a 47-14 rout of the Detroit Lions in which he logged 26 carries for 126 yards and caught 2 passes for 53 more yards. That season was a magical one, as the team captured the AFC Central Division crown and the AFC’s #1 overall seed, before ultimately falling to the New England Patriots in the AFC Championship.

One moment, or game in particular, stands out clear as day, and that’s in the 2002 AFC Wild Card game versus the Cleveland Browns. Now, not to get too far off topic, but not making the postseason since 2002 is unthinkable. I go crazy if Pittsburgh misses the playoffs once, and was agonized during the dual 8-8 seasons in 2012 and 2013, so I can’t imagine how Browns fans must feel. Anyways, heading into this game, it looked like a cakewalk for Pittsburgh, considering Cleveland was a team they had just trounced 28-7 a week earlier. However, they found themselves in a 17-7 hole at halftime, and a 33-21 one with just over 10 minutes in regulation.

Led back by quarterback Tommy Maddox, the Steelers iced the game with a three-yard touchdown run by Fuamatu-Ma’afala with under 54 seconds to go to send the crowd and fans at home into an absolute frenzy. Coincidentally, this game was his favorite as a Steeler too.

“My best moment was a game when we played Cleveland,” he said, according to Teresa Varley of Steelers.com. “Amos Zereoue was doing third down. We had the two-minute drill. Amos got hurt and I had to go in for him on the last drive to go ahead and help us win the game. I guess that would be my best moment.”

After leaving Pittsburgh in free agency, he signed with Jacksonville where his career fizzled out. It was clear the best days of it were spent in the Steel City.

“The organization from top to bottom respects everybody,” he said, according to Varley. “When I went to Jacksonville it didn’t feel the same. Everybody says the same when they leave Pittsburgh. This will always be my second home. It was a great experience.”

Nowadays, he is working for the U.S. Army on their bases in Hawaii. there, he specializes in coordinating all of their youth sports programs.

“We work with kids ages 3-17 and try to counsel them about their parents being deployed,” he told Varley.

Oftentimes during an ESPN telecast, infamous host Chris Berman could often be heard uttering the phrase “He’s a bad Ma’afala” which sort of sounds like you know what. And in his eyes, his time spent in Jacksonville never happened, because he wants to be known for his time in the black and gold.

“In Hawaii, nobody remembers me playing for the Jaguars,” he said. “Everything was all about Pittsburgh. I am glad it’s like that. I want to be remembered as a Steeler.”