Week One. First quarter. With the Pittsburgh Steelers working in the Cleveland Browns’ red zone, Ben Roethlisberger is sacked Paul Kruger by on 3rd and 14.

The three players instrumental in producing that play are all specialists. A common enough sight in 2015.

But there was a time in the league’s infancy where players didn’t have just one role. Playing football meant playing everywhere. Quarterbacks were defensive backs, lineman played both ways, you get the idea. A specialist? Not in the football vernacular.

He was an inaugural member of the Pittsburgh Steelers franchise – then, and as referred to the rest of this article – the Pittsburgh Pirates, in 1933. But his playing days go back so much farther.

Born in 1897, 118 years from today, it is estimated Kelsch played in 400 games over a 20 year span. He was a fullback, a bruising runner, until his age would no longer let him. A few extra years, a few extra pounds, and his Kelsch’s days carrying the football were over. But kicking it? That he could still do.

Throughout his career, he bounced around teams, as was the norm in the early 1900s. He played for squads that sound like names celebrities give their children: Bradley Eagles, Majestic Radios, Duquesne Apprentice, to name a few.

He had a relationship with Art Rooney Sr, playing on his Hope-Harvey and J.P. Rooney teams. When The Chief threw down the $2500 required to join the upstart NFL, it’s reported Kelsch was one of the first players offered an opportunity to join.

At 235 pounds and 36 years, his portly figure made him heavier than the team’s offensive lineman. He was older than Rooney. Kelsch didn’t attend college; if you look him up in a team media guide, he’s listed as attending “Christian.” That’s not his college. It’s his first name. Like the player, “Mose” is a bit of an enigma. He was never quite sure who or how he was dubbed the moniker.

In the Pirates’ second game, he was called upon to kick the game-winning extra point. A triumphant comeback over the Chicago Cardinals, once trailing 13-0, to take the lead late in the fourth quarter.

The baseball team may have been king at the time but the victory earned the Mose’s name plastered on the cover of the sports section. 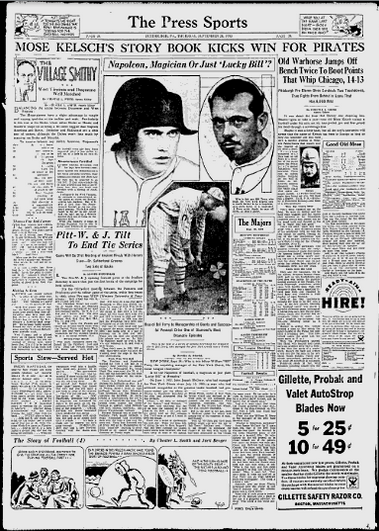 He came up big again, netting the first ever true “last second” play in franchise history. Over a month later against the Brooklyn Dodgers, his toe booted a 36 yarder as time expired to end the game in a 3-3 tie. For the team during that time period, that was almost as good as a win.

According to records, he, as the league’s first true specialist, would end the year with two extra points and three field goals.  At every opportunity, fans would chant “We want Mose!” for the curious opportunity to watch a player step onto the field to just kick field goals. He became the first fan favorite.

For a moment, he was a local legend. The man who once claimed to have kicked a 50 yard field goal in his pre-NFL days. The one who would quip, when referring to his missed attempts, that “even Honus Wagner used to strike out now and then, so I guess I can miss one, can’t I?”

Kelsch would spend another year with the team though statistically, his role appeared to have been diminished. He led the team with another pair of extra points but made only one field goal. Teammate Armand Niccolai would pace the group with three makes.

Who knows how much longer Kelsch would have spent in the league. Probably for as long as the Rooney’s would have let him.

Unfortunately, we never received the chance to find out that answer. In the early morning on July 13th, 1935, he was killed while driving home. Side-swiped by his former teammate Edward A. Jackson, Kelsch was rushed to Allegheny General and pronounced dead four hours later.

In tribute, his death was front page news of The Pittsburgh Press, the obituary written by longtime and revered writer Chester L. Smith. 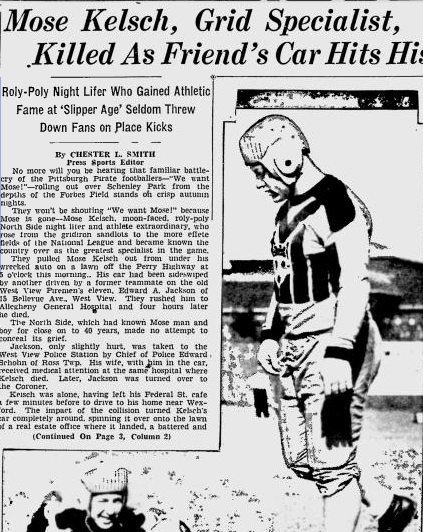 If his longevity is to be believed, Kelsch played football for longer than anything else he did in his life. Alive for 38 years, playing for 20 of them.

Born in the same century as the game he loved became professional. He grew up as the game itself manifested from the innovative but silly to something serious with staying power.

And Kelsch gets to be a recognizable footprint in that game’s history.