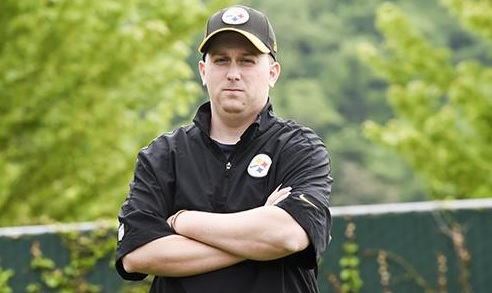 The Pittsburgh Steelers first OTA practice of the offseason is about to get underway and prior to that happening the team announced that they have added a coaching assistant to the staff.

Steve Meyer, who served as a scouting intern for the Steelers the last two seasons, has now been added to the staff as an assistant.

Meyer spent three seasons as a wide receiver at Saint Vincent College and also served as an assistant coach there after his playing days were over in 2010.

Meyer will assist in game preparation, video analysis and opponent scouting moving forward with the Steelers. He will likely take over the jobs that Joey Porter and Jerry Olsavsky both had prior to them being promoted from coaching assistants to linebackers coaches earlier in the offseason.

We have named Steve Meyer a coaching assistant. Meyer served as the team’s scouting intern in 2013 & 14. #Steelers pic.twitter.com/lO2OpNG6eK