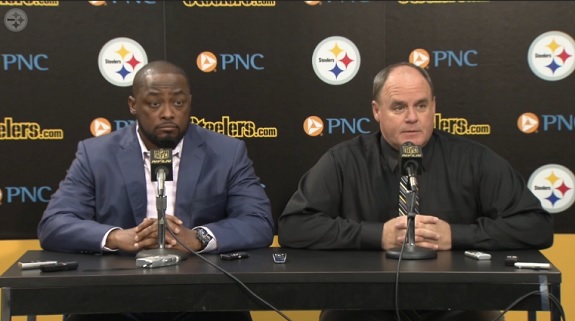 Last season, the Pittsburgh Steelers had just 11 interceptions, with two of them coming from Brice McCain in the regular season finale, meaning heading into the game that would decide whether or not they win the division, the team had a single-digit number in the interceptions column.

The Steelers drafted two players who posted double digits during their final season in college in 2014 all by their lonesome, with second-round cornerback Senquez Golson leading the nation at his position with 10 interceptions and seventh-round safety Gerrod Holliman leading all players with an NCAA recording-tying 14 interceptions.

Add in the still impressive five interceptions from Doran Grant, the fourth-round cornerback the Steelers began day three by nabbing, and as general manager Kevin Colbert said in his post-draft press conference, “we’re adding 29 interceptions to our defensive backfield. We’re excited about what that can bring”.

While Golson and Doran are suitably recognized for an all-around game, however, Holliman has very legitimate concerns about his ability to contribute in run support, to tackle the catch, and to get fooled by quarterbacks due to his overaggressive approach to picking the ball off.

But it’s precisely because of his aggressive nature in the air that the Steelers were interested in him, without question and without hesitation. Colbert talked about Holliman specifically in his press conference:

“14 interceptions is no accident. This kid has great instincts. He has great awareness. He’s a film studier. You just see him making breaks on the ball before the quarterback throws it, and he’s got the great hands to finish it. … This kid’s a ball hawk. He knows how to make interceptions.”

There is no disputing the raw numbers. The Steelers did add, between three players, a group of defensive backs who recorded an extremely eye-popping 29 interceptions during a single college season.

But it is fair to question whether or not the scouting process became too enamored with ball skills in the secondary while ignoring other concerns about the players that they were adding. It’s never a good thing to become myopic during the evaluation process, because it becomes so easy to overlook what’s in your peripheral vision.

I’m not saying that is indeed the case, but when you look at the class, you do see legitimate questions being asked. Is a second-round pick too high for a cornerback under 5’9” whose poor vertical could limit him to the slot? Is it even worth taking a seventh-round flyer on a free safety who can’t seem to tackle, and thus couldn’t offer much on special teams?

Grant, perhaps, is the lone exception pick that is free of questions as a fourth-round pick who is a solid tackler and has a special teams pedigree already, even if he, too, may be a slot corner because of his 5’10” height and average vertical.

There was, more than usual, a clear narrative to their draft process this year, and when you can see the narrative so explicitly, you can’t help but wonder if the team didn’t force the issue, or biased itself in the evaluation process. But the beauty of the draft is that time and the players themselves will tell whether it was a hit or a miss.