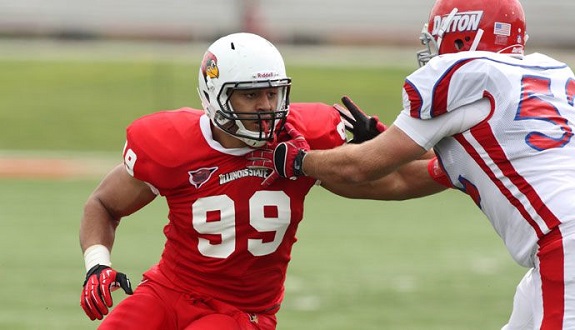 – Decent height/weight for the position and looks to have adequate length though wish he was a bit taller
– Extremely high motor, gives chase on the perimeter, and will make tackles far downfield
– Good athlete with movement skills
– Relentless pass rusher who earns his sacks
– Quick first step which allows him to collapse the pocket as a pass rusher
– Flashes ability to get off blocks against the run, some two-gapping ability
– Productive against FCS’ best competition in the tape viewed
– Versatile and played up and down the line in even and odd fronts
– Productive senior season

– Doesn’t have ideal height for the position and though build isn’t bad, is nothing imposing
– Wildly inconsistent against the run
– Lacks strength to hold POA, washed and even pancaked far too often
– Needs to play lower and is too easily leveraged, stiff player who doesn’t show enough bend
– Poor hand use as a pass rusher and is easily stuck on blocks, bull rush is his only move
– Small school concerns, faced FCS competition
– Lack of success from the school

Prate is one of those unknowns to 99% of fans, myself included until I dove into the tape. Like L.T. Walton, Prate has an unbelievable motor. It might be his best trait. Reminds me of a poor man’s Tyson Alualu.

Takes a good angle and brings the runner down thirty yards downfield.

He isn’t a great pass rusher but man, he sure tries hard. Tireless motor. 3rd and 14, red zone play, works his way to the QB, holds him up, and swats the ball out. From the same game because as you’d expect, tape of the Redbirds is limited. If it wasn’t for them making a deep run into the FCS playoffs, I probably wouldn’t have had anything to work off of.

One more time, for good measure. Tracks the back releasing into the flat.

This is the time where I repeat myself about John Mitchell needing players who run to the ball. He has it in Prate.

Unfortunately, Mitchell also needs players who can hold the point of attack. And there are severe questions about that aspect to his game. He’s too easily washed and leveraged.

In the middle, Prate gets stuck and eventually taken to the ground.

Same here against NDSU. Not pretty.

And one more time. No strength, pushed back, knock down. All too common theme with him.

If Walton heads to the practice squad, Prate’s chances will obviously diminish, even with the expansion to a ten men group. He’s going to compete, hustle, and push people, all traits that are great for the team. But for himself? I don’t think he fits the scheme well and would’ve done better as a three tech in a one-gap scheme.