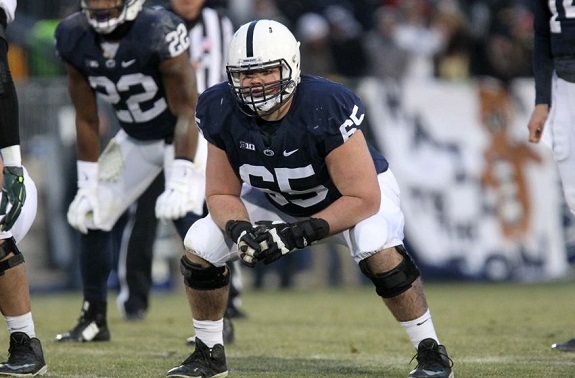 For many college football players, the dreams of the NFL are in the back of their minds. Some even decide to forgo their senior seasons of eligibility and enter the NFL Draft early, depending on what their draft report yields. For others, the senior season is the icing on the cake of their collegiate careers, a farewell tour if you will, to the university where they’ve spent the previous 4-5 years of their lives. For offensive lineman Miles Dieffenbach, one of the Pittsburgh Steelers undrafted free agent pick-ups out of Penn State, it was a senior season that almost wasn’t.

In March 2014, during an offseason practice, the unthinkable happened to him when he got rolled up under in practice, and suffered a torn anterior cruciate ligament and sprained medial collateral ligament in his left knee. Immediately, the thoughts of missing his senior year were on Dieffenbach’s mind, but not only that, the possibility of being healthy enough to begin training for the NFL.

“Probably the worst moment of my life when I realized that happened,” Dieffenbach said, according to Ryne Gery of the Centre Daily Times. “That was tough.”

As evidenced by the miraculous and speedy recovery from an ACL injury by All-Pro running back, Adrian Peterson, it’s a testament that it’s not the end of a career by any means, just the fact that there’s a long and grueling rehab timetable.

Dieffenbach’s immediate goal was clear, and that was to be back in time for his senior season, and to help protect up-and-coming quarterback, Christian Hackenberg, a likely early-round pick in the 2016 NFL Draft, should he decide to enter. Not only was Dieffenbach self-motivated enough to make it happen, he had the support of the entire team as well as head coach James Franklin in his ear, telling him just how much everyone needed him.

“That’s all Miles needed,” George Dieffenbach, his father, said, according to Gery. “He needed hope at that point, and when you have hope, you have everything.”

To put things in perspective, with an MCL sprain, it needs to be strengthened before going under the knife for the ACL. So Dieffenbach went to work that very day, because every moment was magnified because it delayed the surgery.  His father saw just how much the injury was weighing on his son’s mind.

“Dad, I just want to play football,” he told his father, according to Gery.

Dr. Scott Lynch, a surgeon at Hershey Medical Center, repaired his ACL in the waking hours of the morning on April 23. Where did he go immediately after, but none other than right back to campus, to begin working with head athletic trainer, Tim Bream. For months, Bream became his best friend, working everyday to get the knee back to full strength.

“It’s a grind every day,” Dieffenbach told Gery. “You got to wake up and rehab all day. The hardest part, to be honest with you, is just kind being away from the team and your teammates during practice. And when they’re outside working out, you’re inside rehabbing.”

His hard work didn’t go unnoticed either. Fellow senior and team captain, Mike Hull, said he knew as soon as the injury occurred, Deiffenbach went about it the smart way, and laid out a vision for his road to recovery.

“He made sure he got at least 8 to 10 hours of rest every night, so his body could recover,” Hull told Gery. “He was working out really hard in the weight room and in the trainers’ room all year long.”

Fast forward to the season, and the knee still wasn’t game-ready. Instead, he took on a coaching role, helping teammates break down film and pick up nuances of opposing defensive lines. Finally, on November 8 against Indiana, he made his return to the field. Franklin and the coaching staff eased him back in, only allotting him 10 snaps. He gradually worked his way back to a full workload though, and helped Penn State cap their season in thrilling fashion in the 31-30 overtime victory over Boston College in the Pinstripe Bowl.

“That was the most excited I’ve seen him in a long time,” Hull said. “Once you get out there and get a full game or most of a game under your belt, it kind of all comes back to you all those feelings that the game of football brings out in you.”

Although going undrafted last weekend, Dieffenbach’s phone was ringing afterwards, and he ultimately chose to sign with the Steelers. At 6-foot-3 and 303 pounds, Dieffenbach doesn’t possess the ideal size that you’d like at the position, but neither did another former Nittany Lion who’s went on to have a decent NFL career in A.Q. Shipley. Shipley also began his career with Pittsburgh, and although being waived by several teams, he’s actually recently been a starter for the Baltimore Ravens and Indianapolis Colts.

However, rehabbing the knee was the hard part, and now for Dieffenbach, he can hopefully show he has what it takes to impress the Pittsburgh coaching staff and prove he belongs at this level. And his coaching staff at PSU couldn’t be happier for him.

“Miles was great to coach,” offensive line coach Herb Hand said according to Greg Pickel of Pennlive.com. “He has a good understanding of concepts and scheme and is very athletic. In the right situation, Miles could be a nice addition as an interior player with his best opportunity to contribute coming at the center position.”