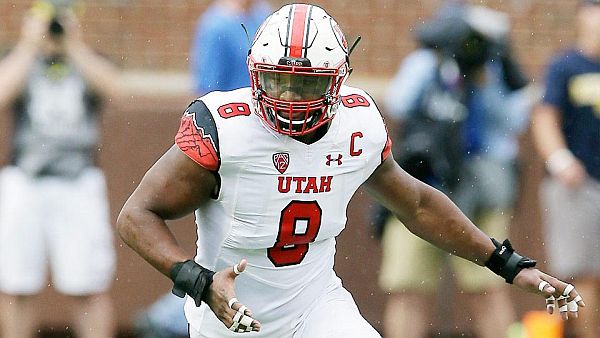 For some NFL families, like the Mannings, they have a “silver spoon” luster to them, where greatness is something that is automatically expected, and anything less is deemed a failure. For others, like Nate Orchard, the road to the league is far more bumpy.

Growing up near Los Angeles, gangs were a part of the culture, and Nate’s older brother became torn between his gang affiliations and family, the latter of which he ultimately chose. In fact, his brother actually rejected a basketball scholarship to powerhouse UCLA, instead getting married and raising a family.

“He didn’t realize the opportunity he was giving up,” Nate says. “It was a huge lesson I learned from that: If I ever had the same chance, I would take the college route and make the most of it.”

His mother, Ana Fakahafua, could no longer care for him, so at the tender age of 10, he was forced to pick up and move to Salt Lake City, Utah.

“My mom would send money from California to provide for us, but after two years, she couldn’t do it anymore,” he said. His father you might ask? Nonexistent. “I have no idea who my real father is,” he said. “I asked my mom when I was 17. She gave me a straight answer and said growing up, the father who I thought was my father wasn’t actually my dad.” This was a hard pill to swallow for him, but clearly he could see it coming, at least physically. “Do I look black? Do I look Polynesian? What am I? You could tell I’m not full Polynesian. It was a relief to know the truth,” he said.

While living with his brother, who was 18 with two kids, Nate helped with chores and such, but he says there was no structure and certainly no discipline. His brother was eventually evicted, and this was the time when Nate began realizing he had to do something. He went to his AAU basketball coach, Dave Orchard, and asked if he could stay with him and his family.

“It was probably the most difficult thing I had to do in my life,” Nate said. “I wasn’t the type of person to ask people for things, but I knew if I wanted to continue playing these organized sports, living my dream, that’s the only way I could do so.”

Dave’s wife, Katherine, still remembers it fondly. She was outside weeding the garden when she turned and saw Nate wearing his dirty basketball jersey, and carrying nothing else, asking to stay with them. Now the Orchards were no strangers to fostering children, having welcomed a couple in before, not to mention their own three kids. Katherine initially said no, but this wasn’t the first time they’d been asked to take Nate in, as his mother Ana had been asking them as well. Finally, Nate had found a home. That was the day Nate Fakahafua became Nate Orchard.

He eventually caught the attention of national recruiting services, earning a 3-star grade, albeit as a 6-foot-3, 200-pound wide receiver. Eventually, after signing with the Utah Utes, he made the transition to the defensive side of the ball. Manning the left defensive end spot, he posted 17.5 tackles-for-loss and 6.5 sacks in 2012 and ’13 seasons, before erupting like a volcano in 2014. The pass rushing demon racked up an eye-popping 18.5 sacks last season, and took home the Ted Hendricks Award, given to the nation’s top defensive end.

He credits his breakout season to a maturity and different perspective on life he’s gained from his marriage to Meagan Webber Orchard, and their daughter, Katherine Mae Orchard.

“I think the reason I took the leap as a football player my senior year was just a mindset – the mentality that I want to be the best, and finally having some stability in my life with marriage, not staying out late,” Orchard says. “This is my last year. I have to ball out and do everything I can to be the best I can, to lay down that legacy for my kids and their kids.”

After making second-team All-American honors, and a standout showing at the Senior Bowl, where he notched five tackles and two QB hits, the 6-foot-3, 250-pounder posted a 40 time of 4.8 seconds at the combine, a somewhat disappointing number. But one could say the same for former Ted Hendricks Award winners Terrell Suggs, Elvis Dumervil or even the Steelers’ own LaMarr Woodley. All went on to numerous Pro Bowls and All-Pro recognition.

“You just give me the time and the work, and I’ll get it down and I’ll be the best,” he said. “I think if I get the right coaching and continue to do the right things consistently in terms of my run leverage, I can be a great defensive end or outside linebacker. I’m 250 now and I think I can add a couple more pounds, so I’m working on that right now before my pro day.”

The Steelers have definitely shown interest in Orchard, flying him in recently for a visit. He cited what an honor and privilege it was to analyze game film with outside linebackers coach Joey Porter.

“He loved me as a player and the things I was doing on the field and especially off the field,” Orchard said. “They were very happy with the way I handled situations in my upbringing.”

With terrorizing opposing quarterbacks a big priority for Pittsburgh, Orchard appears clearly on their radar, perhaps as early as round 1 or 2. He also fits the bill in what they’re looking for, in terms of on-field production, maturity, leadership and determination, which he credits to the Orchard family. Sure, he had only known the family for a few months, and there were often the thoughts of missing California or his Ana, which was natural for a youngster of his age.

“But at the end of the day, I knew what was best and staying with the Orchard family would give me stability and allow me to excel in my sports life at the same time as life in general,” he said. “I knew in my heart the Orchard family was the closest thing, the realest thing I had to a family.  The Orchards stuck with me through thick and thin. That’s why I changed my name from Nate Fakahafua to Nate Orchard before I got married two years ago, going into my junior year.”

Now, he’s on the verge of a new home, possibly in Pittsburgh, a city who embraces it’s sports teams. Just ask recently-retired Ike Taylor or Troy Polamalu what the Pittsburgh Steelers mean to them.

“There’s that motor and that tenacity to get home,” Orchard said, regarding getting after the quarterback.

“Because my team needs me, because our fans are watching, because it needs to happen. I just need to get home. I need to get there. I’m going to find a way.”

Come the end of April, Pittsburgh may be waiting with open arms.