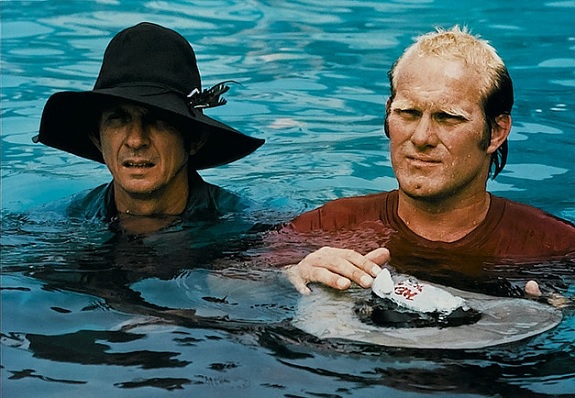 Two weeks ago when James Best, the actor who played “Sheriff Rosco P. Coltrane” on the television series “The Dukes of Hazzard,” passed away at the age of 88, The Steelers Depot tweeted the news to their followers.

It was a legitimate tweet. “The Dukes of Hazzard” almost had a huge influence on the Pittsburgh Steelers.

In 1980 country culture was the rage across America and “Dukes” was the second highest rated television program in the country. Networks wanted to copy cat the program in the way reality or competition shows have become a staple of television today, or historically how a series like “The Twilight Zone” begat “The Outer Limits.”

So on April 24, 1981 a Dukes copycat pilot, “The Stockers,” was aired on NBC with Terry Bradshaw in the starring role.

One problem. Terry Bradshaw was still the starting quarterback of the Pittsburgh Steelers when the pilot was made. And evidence indicates if “The Stockers” was picked up he likely would have left the Steelers to star in the show.

“It’s extremely improbable that Terry could play football if the show becomes a series,” John McMahon, president of (Johnny) Carson Productions, which made the pilot, told People Magazine in the March 16, 1981 issue.

There’s little doubt why Bradshaw was chosen to star in such a show. Because of his country boy persona few NFL players, if any, have been as iconic as Bradshaw. He had even made his acting debut in a movie with Best, 1978’s “Hooper;” a Burt Reynolds film about stuntmen with a “Smokey and the Bandit” feel.

Bradshaw wasn’t the only star of the pilot. Country music legend Mel Tillis, who had a scene with Bradshaw in 1980’s “Cannonball Run,” was to be his sidekick, playing two stock car drivers on the run from a Volkswagen-driving bill collector played by Robert Tessier.

Both Tessier and “Stockers” director Hal Needham had been a part of “Hooper.” Needham, a stuntman by trade, directed the film, and Tessier, who also played the bald murderer “Shokner” in 1974’s “The Longest Yard,” was Bradshaw’s ally in a fight scene.

There was one memorable scene in “Stockers.” In it, Tillis’ character helped Bradshaw’s character prepare for a date by helping him find the right toupee.

“Here’s your Robert Redford,” Tillis said while giving one style of hairpiece for Bradshaw to try on. “Here’s your Burt Reynolds.”

Ultimately, though, “The Stockers” was not picked up by NBC, proving again Hollywood will never understand country as well as Nashville does. Bradshaw later wrote how there was confusion during filming and Tillis supposedly called the quarterback during the original airing of the show and told him, “Well, it ain’t ‘Gone with the Wind.’”

After its original airing “The Stockers” would be shown once more, at 10:30 p.m. on October 10, 1981 when the Los Angeles-Houston playoff baseball game went short.

Bradshaw would go on to play three more seasons for the Steelers, and “The Stockers” would be forgotten.

One wonders if Bradshaw wasn’t attempting to “get on with his life’s work,” as Chuck Noll would say, when he filmed “The Stockers.” His 1981 Topps football card mentions Bradshaw’s acting ambitions, and Bradshaw even lamented to Gary M. Pomerantz in the book “Their Life’s Work” if he could have done it over again he might have retired after the 1979 season to give him four championships in a nine year career.

But Bradshaw had many highlights during his final seasons. In 1981 the Steelers were 8-5 before Bradshaw broke his hand in Week 14 against Oakland. The Steelers lost their final three games by three, seven, and one points, leading speculation if Bradshaw had played a complete season if an 11-5 record and subsequent AFC Central Championship on tie breakers would have been possible.

The influence of Bradshaw on 1981 is enough to envision the season as a disaster without him. Cliff Stoudt was Bradshaw’s heir apparent, and he had a career 14-28 touchdown-to-interception ratio as a Steeler. Though he is the quarterback of record during the Steelers’ 1983 AFC Championship season, it largely came from a weak midseason schedule and giving the ball to Franco Harris, who rushed for 1,000 yards for the first time since 1979. When Harris’ legs gave out, so did the Steelers until Bradshaw’s legendary return in the 15th game of the season to lead Pittsburgh to a final victory in 1983 and the division championship.

The only memorable thing Stoudt did in 1981 was break his arm in a bizarre bar room accident in the middle of the season. If and when he would have done that, 1980 first round draft choice Mark Malone would have become the starting quarterback for the season’s last seven games and played as he did as Bradshaw’s substitute in ‘81, respectfully but not good enough for victory.

Stoudt would have played himself out of his roster spot and Harris would have shown he was no longer capable of being the primary figure of an offense as he was during his first professional seasons. The Steelers would have had a higher than first round draft choice than the 12th pick they received in 1982, and likely would have selected either eventual eighth pick Gerald Riggs or ninth pick Marcus Allen rather than running back Walter Ambercrombie.

Consider the ramifications if Allen is on the Steelers and not the Los Angeles Raiders. The Raiders would not have won the Super Bowl in 1983 and would have faced rebuilding projects at a much earlier date. The franchise’s legacy would be totally different; would the Raiders even be synonymous with hip-hop culture if they lost rather than won in the eighties?

Could a Steelers team quarterbacked by Mark Malone in 1982 with Allen or Riggs and Franco Harris have improved on their 6-3 record in the strike shortened NFL season?

Probably not. Bradshaw was the catalyst for the offense that season, leading the NFL in touchdown passes and the Steelers to a playoff berth.

But if “The Stockers” had only lasted a season, who knows what would happen if a rested Bradshaw would have returned to the Steelers in 1982 with Allen or Riggs? “One For the Thumb” conceivably could have been reality.

Conversely if “The Stockers” had been successful and run through 1983, without Bradshaw would the Steelers have taken Dan Marino in this alternate universe? That could have given the Steelers the top quarterback and running back of the 1980s and led to a continuation of their dynasty.

Sounds great! But it would not have come without sacrifice.

If “The Stockers” proved to be the “car show” NBC desperately wanted to combat “The Dukes of Hazzard,” it’s likely “Knight Rider” would never have gotten the green light from network executives in 1983.

And now you know why the Steelers don’t have cheerleaders.

Marky Billson used to drive people crazy, we mean absolutely crazy, with his references to “The Dukes of Hazzard” on the old steelers.com message board. His work regularly appears in the Pittsburgh Post-Gazette and he is the only person in the universe who could have possibly written this piece.