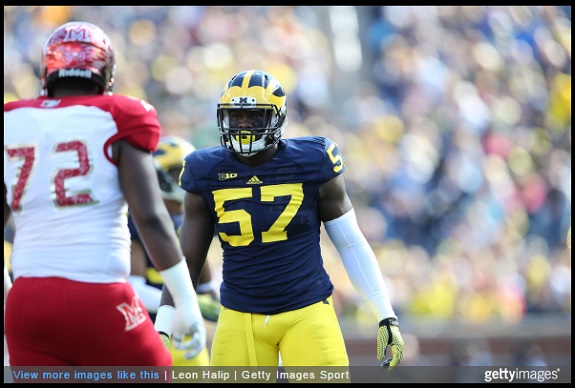 Over the last year, the NFL has been given somewhat of a black eye when it comes to the off-the-field decisions by some of it’s star players, namely Ray Rice, Adrian Peterson and Greg Hardy. All are or were Pro Bowl caliber players and all, for reasons ranging from domestic assaults to child abuse, had suspensions brought down on them from the league office.

All have been reinstated by the league, but it begs the question as to how the 32 teams of the league will view players in the upcoming draft that have character concerns. It’s issues like these that will give general managers sleepless nights, wondering what their players are doing during the offseason in the wee hours of a Saturday or Sunday morning.

Aaron Hernandez is a recent example of a player with some off-the-field issues while at Florida, but other than failed drug tests, nothing had actually been blamed on him.

“They couldn’t pin a lot of stuff on him at Florida,” said an AFC scouting director, according to NFL Media reporter Albert Breer. “But people at the school would tell you, ‘Every time there’s an issue, he’s around it.’ If there was trouble, Hernandez’s name would come up.”

It’s well-known Patriots coach Bill Belichick and ex-Florida coach Urban Meyer share a strong friendship, so the Pats likely did plenty of homework on Hernandez before pulling the trigger. This is one instance where it came back to bite the team.

There exists another prospect this year, who besides sharing the same alma mater, displays a lot of traits to former-Steelers pass rusher, LaMarr Woodley, and that’s Michigan’s Frank Clark. At 6-foot-3 and 271 pounds, he is a large defender who also is very physical at the point of attack, able to set the edge well and convert his speed into a powerful bull rush. This past season, he was second on the team with 13.5 tackles-for-loss and 4.5 sacks, but his season ended abruptly in November after being arrested on domestic assault charges, which were eventually reduced to a disorderly conduct misdemeanor. That’s not the only blemish on his record though, as in 2012 he plead guilty to a second-degree felony charge after stealing a laptop from an on-campus dorm.

However, from what he’s saying to teams behind closed doors, he seems to be conveying the right message.

“I don’t think he gets past the 4th round at the latest,” one NFC Personnel Executive said according to NFL.com. “Our team felt like he gave honest answers regarding previous incidents and we came away feeling much better about him after speaking to him.”

With his long arms and has uncanny agility despite his size, posting a 4.64 in the 40 yard dash at his pro day. He also registered a 38.5 inch vertical at the NFL Combine, showing off his explosion. However, it’s fair to wonder if a player like Clark is even on the draft board of Pittsburgh, considering some of the troubled players they’ve dealt with the last few years. If Clark can keep his head on straight, he’s likely a steal for whatever team gets him.

According to CBS Sports, Clark said the counseling he’s received from his instances has made him a new man.

“I’ve been in counseling, doing things to strengthen my mindset,” Clark said. “Counseling has taught me how to be a man. It’s not like I’m a man when I’m 21. It’s taught me to be a man and how to accept responsibility for all my actions.”

Everyone makes mistakes, although some not as bone-headed as Shane Ray getting busted with marijuana just days before the NFL Draft. If Clark truly has become a changed man, then his ceiling is very high, and it’s just a matter of “if” a family-oriented team such as the Pittsburgh Steelers would be willing to roll the dice on him in the middle rounds.