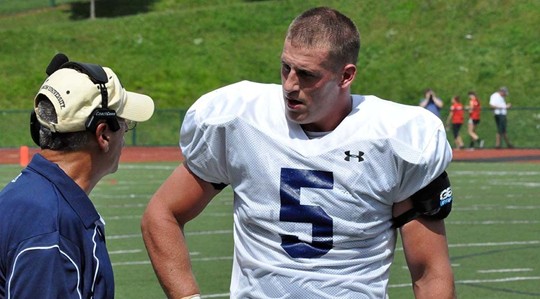 For the majority of NFL players, their road to Sundays follows a certain trend. It begins with sterling ability on the high school gridiron, followed by national recruiting services labeling them with a number of stars next to their name. The top college programs in the nation come knocking, and the scholarships pile up. After playing against the best competition the country has to offer, the player often even skips their senior season of college, because the allure of the NFL awaits. It’s a pipeline followed by many, with many of this year’s projected first-rounders consisting of high school blue-chippers.

For Julian Howsare, Clarion University’s defensive standout, his journey onto an NFL radar began as a lightly recruited prep star at Altoona High School. As a junior, he began drawing interested from Division I schools, but a coaching change his senior year left him to do his own recruiting.

After redshirting as a freshman, Howsare didn’t take very long to show he belonged. In 2012, he became a wrecking ball, racking up 14 sacks and 4 forced fumbles, being named a third team All-American and to Football Gazette’s first team All-Conference and All-Region. His breakout moment in his eyes was a comeback win versus East Stroudsburg as he compiled 3.5 sacks in the game with two of them coming on the last series to win the game.

In 2013, he proved 2012 was no aberration, recording 18 tackles-for-loss, 10 sacks, 2 interceptions, 2 forced fumbles and four blocked kicks en route to PSAC West Defensive Player of the Year honors, as well as repeating as a first team All-Region and third team All-American performer.

As a senior this past year, he continued to prove his worth as one of the most tenacious defenders nationwide, tallying 16 tackles-for-loss, 11 sacks, three blocked kicks and two fumble recoveries. All of this despite being game planned around and facing double or triple-teams. For the second straight year, he was named the PSAC’s Defensive Player of the Year, and for the third straight, he was selected an All-American. He was also a two-time nominee for the Gene Upshaw Award, named after the Pro Football Hall of Famer. It’s annually given to the best offensive or defensive lineman at the Division II level.

Howsare also earned an invite to participate in the National Bowl, an all-star collection of D2 talent. He definitely made an impact with NFL scouts as well, garnering Defensive MVP of the game.

“I got to play with and against a lot of other talented players and showcase my abilities as a football player,” he said. “I also learned a lot from the coaches down there as well and gained a lot of useful techniques and moves that will help me a lot in my future.”

Where his future lies remains to be seen. At 6-foot-3 and 255 pounds, he may be seen by some as too small to put his hand in the dirt, but for a 3-4 team like the Pittsburgh Steelers, he would be an ideal candidate to stand up as an edge rushing outside linebacker.

With 41 sacks over three seasons, while facing countless gameplans devised at stopping him, there is reason to believe he has the ability to succeed at the pro level, as he’s reportedly been timed in the high 4.5/low 4.6 range in the 40. Perhaps scouts from the Steelers have already had an eye on Howsare, as Clarion is located less than an hour-and-a-half from Pittsburgh.

The winning tradition of Pittsburgh is important in his eyes as well. That’s the one thing he likely regrets about his time at Clarion, is not being able to win more games, including a 2-9 senior campaign.

In Pittsburgh, even an 8-8 season is deemed a failure, as we know all too well from seasons past. He realizes his small school status may again get him overlooked by pro scouts, so special teams play is important to him. It doesn’t hurt he has 10 blocked kicks or punts on his resume either.

“I want to give 110 percent at all times and I do not treat special teams any differently then when I play on defense,” he said. “I ask my coaches to be on every single special teams every year and I really enjoy being on them.”

He is the definition of a gritty prospect, perhaps one who has fallen through the recruiting cracks and blossomed at the D2 level. It’s what being overlooked will do, making players scratch and claw for everything they get. He is likely a 7th-round or priority free agent that will have to prove he belongs in OTA’s and training camp, and Pittsburgh would be wise to keep tabs on him, if they haven’t already. With needs for their pass rush, he could spend a year on their practice squad, making the transition from down 4-3 end to 3-4 outside linebacker.

Don’t let his small-school status fool you either, as other PSAC products like Shippensburg University’s Brent Grimes and John Kuhn have went on to become Pro Bowlers.