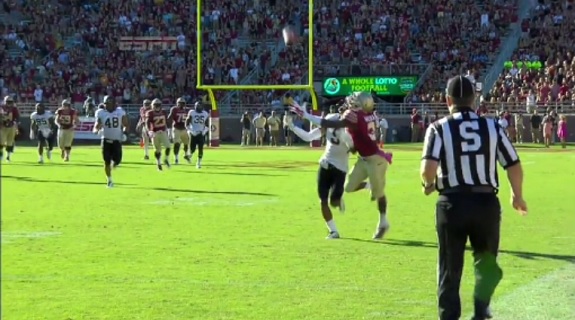 In a Tuesday post, I listed several reasons as to why Wake Forest cornerback Kevin Johnson might not be the Pittsburgh Steelers first round selection in the 2015 NFL Draft. While several of those reasons that I listed were admittedly petty and tied to history, age and the notion that Johnson played for a losing team his entire college career, the fact that he never really played against strong competition during his final two seasons at Wake Forest can be viewed by many as a legitimate concern.

Being as we are getting closer to the draft and starting to wind down our player profiles, now is a good time to start going back through the tape of several prospects we’ve already profiled and thoroughly drill down some of their legitimate concerns. Being as one of Johnson’s concerns is tied to the level of competition that he faced in college, I will dedicate a few post this week to his performances against the top-level teams he played against during the last two seasons.

In today’s post, we will have a look at Johnson’s play this past season in the game against Florida State. I apologize ahead of time if the large number of gifs causes this post to load slower than normal.

After going through the Florida State game twice, I found that Johnson was only really involved in nine total plays, but I think you will see that all nine of them paint a good picture of him.

Late in the first quarter of the game is the first time that Johnson was involved in a play and it came during a wide receiver screen. As you can see, Johnson recognizes the screen very quickly and his solid click and close allows him to beat the slot-receiver blocker in order to make a tackle for a loss of yardage.

The next time that we see Johnson show up on defense is with just under 12 minutes left in the second quarter. On this third and 8 play, Florida State quarterback Jameis Winston goes for the homerun with a pass intended down the right side for wide receiver Rashad Greene. While Johnson allows Greene to have a free release to the outside, his ability to flip his hips along with his smooth footwork allow him to turn and run quickly in order to stay in phase.

While the pass does fall incomplete, it should be noted that Johnson gets a bit grabby on the play and that’s something he isn’t likely to get away with early on in his NFL career. Here’s the replay.

You will see in the next two gifs that Johnson allows catches on two separate plays while playing off. If you look at Florida State’s field position and the time on the clock, however, you can probably understand why. Johnson was obviously asked to not get beat over the top with time winding down in the first half.

Before we get to those two gifs, however, I wanted to pass along some stats to you. According to my scouting friend Dave-Te Thomas, Johnson was targeted 59 times in 2014 and he only 11 receptions. Assuming both of these catches below were included in those 11, it makes that stat even more amazing.

In the second half, Johnson gives up another underneath reception on a curl route. He again allows a free release to the outside and separation back underneath at the top of the route. It would be nice if we had an isolated replay of this, but unfortunately there isn’t one.

On this next play, you will see Johnson follow his receiver inside and then back outside. Winston has plenty of time to stand in the pocket on this play in order to wait until a man breaks free. This is a tough assignment for any defensive back, let alone Johnson, but fortunately the throw is wide and the pass falls incomplete.

Winston again tries to attack Johnson on the opposite side of the field with just over 11 minutes remaining in the third quarter and the Wake Forest cornerback again answers the challenge. Johnson quickly gets himself into phase against sophomore wide receiver Jesus Wilson and while there’s some physical contact between the two players, he is able to not only cut off the angle, but also get his head around in an attempt to find the football in the air in order to prevent himself from being flagged for interference. Very solid coverage.

One of the few knocks on Johnson is his play against the run and more specifically, his tackling technique. Here he attempts to hawk-down a scrambling Winston and tackle him with an arm. This is a good way to get your bicep torn.

Even though Johnson reportedly weighed less than 180 pounds during his senior season, it didn’t prevent him from attempting to deliver big hits and such was the case against Florida State midway through the third quarter as he separated the intended receiver from the football by lowering his right shoulder. In case you’re curious, the receiver that Johnson hit on the play was sophomore Kermit Whitfield, who is listed at 5-7, 183-pounds.

Curiously, Johnson didn’t see much playing time after this play as he missed most of the fourth quarter.

As you can see, Johnson had a great game against Florida State, but I should point out that Greene, the Seminoles best wide receiver, left the game early in the third quarter with a concussion and did not return. The two receptions that Johnson gave up late in the first half were to aforementioned sophomore Wilson and the one allowed early in the third quarter went to freshman Travis Rudolph.

In a post I hope to get down prior to weekend, we will look at the 2013 game between Wake Forest and Florida State and see how Johnson faired against Greene and Kelvin Benjamin.