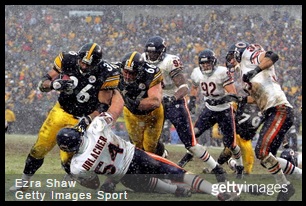 The deal included the Steelers giving the Rams a second-round choice in the 1996 NFL Draft and a fourth-round pick in the 1997 NFL Draft for Bettis in addition to a third round draft pick.

“I got a chance to talk to Coach (Bill) Cowher,” recalled Bettis recently in an interview with steelers.com. “My rookie year the Steelers came to Los Angeles and we beat up on them pretty good and I had a great day running the ball. The first thing he said to me on the phone was ‘We just traded for you. If you can’t beat em, join em. I remember you beat up on us your rookie year and I’m glad to have you.’ It was great to hear and to be going somewhere they wanted me. That worked out pretty well.”

To say it worked out pretty well is an understatement as Bettis, was originally drafted by the Rams in the 10th overall in the first-round of the 1993 NFL Draft out of Notre Dame, went on to rush for 10,571 yards with the Steelers over the course of 10 seasons. In 1996, his first season with the Steelers, he was named the AP Comeback Player of the Year and in 2001 voted the Walter Payton Man of the Year. He finished his career with a Super Bowl Championship in his hometown of Detroit and currently sits in sixth place on the all-time rushing list with 13,662 yards.

In case you’re curious, the Rams drafted tight end Ernie Conwell with the 1996 second-round draft that they received from the Steelers and guard Ryan Tucker was drafted the following year with the acquired fourth-round draft pick.

As for the 1996 third-round draft pick that the Steelers received from the Rams as part of the trade for Bettis that was used to draft linebacker Steven Conley.

Bettis will be inducted into the Pro Football Hall of Fame as a member of the 2015 class later this summer. That induction will be followed by the Steelers playing the Minnesota Vikings in the Hall of Fame that will mark the start of the 2015 preseason.