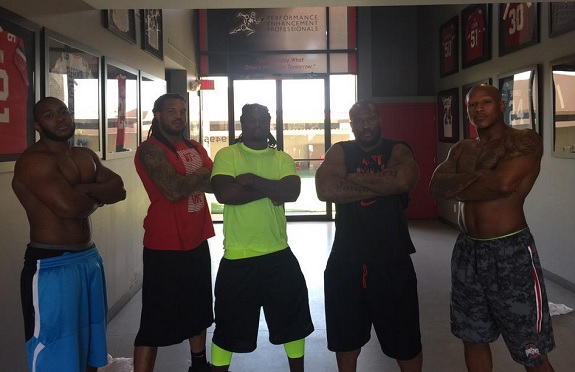 Prior to linebacker James Harrison deciding to re-sign with the Pittsburgh Steelers on Sunday, we passed along the word that he was currently out in Arizona training with several of the other young linebackers on the roster. During a Tuesday interview on Trib Live Radio, Harrison talked about how that training was going so far with Vince Williams, Jarvis Jones, Ryan Shazier and Sean Spence and what the plans are for the group over the course of the next several weeks.

“To be honest with you, Vince is really getting a lot stronger,” said Harrison. “He’s really escalating in his weights and Jarvis and Shazier and Spence are doing well, too. So hopefully after another four or five weeks out here and then we’ll end up coming back the last five, six weeks from June until July and really kicking things in there and let your work speak for itself after we hit the field come August, and hopefully we can roll it all the way out until February.”

This is really great news as Harrison really has the respect of all of these young players, who seem to want to duplicate the veteran’s offseason actions. Harrison was then asked to talk about how all of this came about as it relates to him mentoring the younger the linebackers throughout the offseason.

“This was just over the process of going through the year and guys watching what I did and just talking and they wanted to know where I was at and who I was training with, said Harrison. “And I let the guys know, like, “I’m in Arizona, I’m at PEP [Performance Enhancement Professionals]. There’s a guy out here who has a great understanding of body mechanics, knowledge of what to do for each individual to improve whatever it is they need to improve on.'”

When you think about it, this is really the first time that Williams, Jones, Shazier and Spence all have had an opportunity to experience what Harrison does during an offseason being as the veteran was with the Cincinnati Bengals in 2013 and retired until Week 4 of last season. They all should benefit greatly from their time with Harrison this offseason as long as they all are willing to put in the effort. They couldn’t ask for a better mentor and it will be interesting to see what kind of shape they all show up in later this summer.