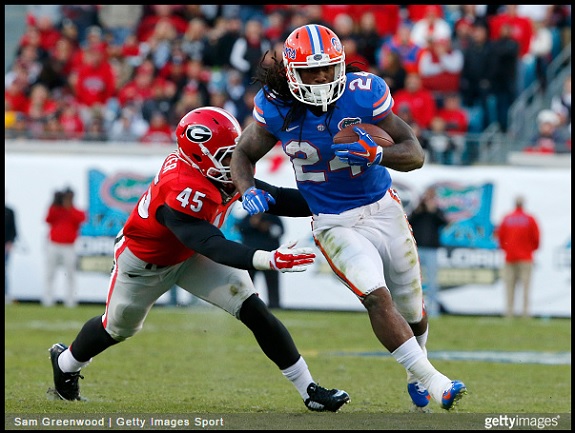 The Pittsburgh Steelers seem poised to add a running back at some point during the 2015 NFL Draft and it appears as though one already has a pre draft visit scheduled with the team ahead of his Pro Day.

According to Greg Auman of the Tampa Bay Times, Florida running back Matt Jones let it be known a few weeks ago that he has a visit scheduled with the Steelers.

Jones, who measured in at the 2015 NFL Scouting Combine at 6023 and 231 pounds, rushed for 817 yards and six touchdowns last season at Florida. The underclassman also caught 11 passes in 2014 for 65 yards and a score.

“Big ol’ dude. We always reserve a place for chain movers on our depth chart, so he does some of the things that we like, even if he’s limited, said one AFC area scout of Jones, according to Lance Zierlein of NFL.com, who compares the Florida running back to BenJarvus Green-Ellis.

Many draftniks have Jones pegged as a fifth or sixth round selection, so he could be an option for the Steelers late if he’s still on the board. The Steelers were awarded a sixth-round compensatory draft pick last week, so that might be the perfect round to select Jones.

The Florida Pro Day is scheduled for April 7 so look for Steelers head coach Mike Tomlin and others to be present for it.