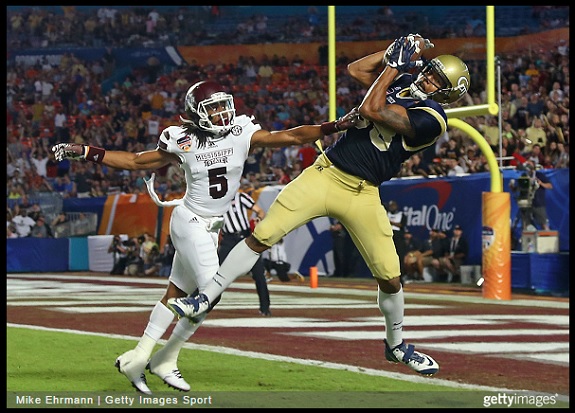 There aren’t many folks 6-foot-6 and 238 pounds who run a 4.46 40-yard dash walking the earth, but one of them is available, perhaps late, in the 2015 NFL Draft, and is a prospect who could add valuable depth and perhaps a whole lot more to the receiving corps of the Pittsburgh Steelers.

The year before Darren Waller arrived at Georgia Tech in 2010, star wide receiver Demaryius Thomas left for the NFL. During the summer of 2011, Waller witnessed an exquisite car pull up outside Bobby Dodd Stadium, and out popped “Megatron.” This goes to speak of the recent wealth of wide receiver talent at the school. Calvin Johnson had some great advice for Waller, a safety who was trying to become a wide receiver in coach Paul Johnson’s triple-option offense.

“He said, ‘Take everything in as you can,’ because I never really played receiver before,” Waller said. “And always have confidence in yourself no matter how hard the learning curve may be. Or you may not be seeing coverages as quickly as you want to and things along those lines. Your routes may not be as good but just stay at it and know you have the athletic ability to do it.”

Waller adjusted to his new position, but never had more than 500 yards in a season. In fact, in his four seasons there, he only recorded 51 catches. However, on talent alone, he’s poised to be the next GT receiver drafted, and his imposing frame is eerily similar to that of Johnson, the game’s best jumbo receiver. At the combine, he ran his 40 in 4.46 seconds, posted a 37-inch vertical and had a 60-yard shuttle time of 11.35 seconds, ranking near the top of all the receivers there.

However, despite all the intangibles, he still is who he is, and that’s a project. Georgia Tech, known more for their ground attack, doesn’t have an NFL route tree, and Waller said most of his routes there were either comebacks, posts or curls.

However, when facing a press corner looking to jam him at the line, he def possesses the physical ability to handle it readily. An invite to the East-West Shrine Game, Waller manhandled smaller defensive backs in drills. NFL Network analyst Charles Davis said, “even when he is covered, he has ‘uncovered’ himself” because of his sheer size and strength.

The Steelers got a large, downfield receiving threat in the fourth round of last year’s draft in Martavis Bryant. The thought of adding Waller to the receiving corps, and forming a “twin tower” dynamic with Bryant would be very much to the liking of quarterback Ben Roethlisberger. As we all know, he loves his big receivers. Waller could have a profound effect on the team’s red zone woes as well, an area that could definitely be improved heading into the 2015 season. With stud runner Le’Veon Bell missing the first few games, the passing game may have to shoulder more of the load, and adding an intriguing talent like Waller certainly wouldn’t hurt.