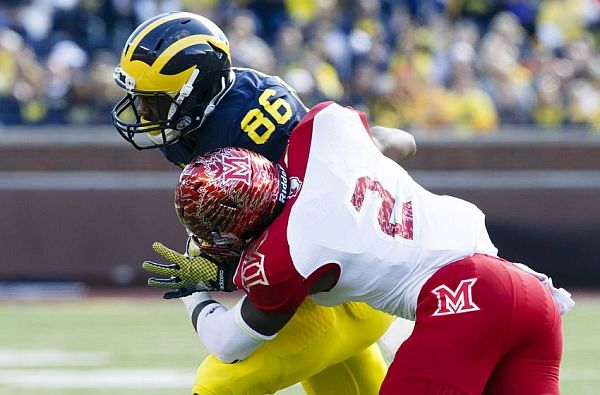 The NFL landscape is littered with former hoopsters who successfully doubled at both sports, or made the transition from the hardwood to the gridiron. Many are tight ends, featuring household names like retired Tony Gonzalez, Antonio Gates, Julius Thomas and Jimmy Graham. On the defensive side, sack artist Julius Peppers once was a force in the paint for the North Carolina Tar Heels. In the 2015 NFL Draft, there’s another name to keep an eye on, and with the NFL Combine this week, it’s a name that could be especially intriguing to the Pittsburgh Steelers, considering their needs at cornerback. Miami of Ohio’s Quinten Rollins is a former dual-sport athlete in high school, but he ultimately chose basketball over football.

Growing up was a trying period for Rollins, as he was raised by his mother and grandmother, while his father was in jail.

“He got out when I was 15. I met him once, and that was it,” Rollins said.  “It really doesn’t affect me like you’d think it would because I was raised by two strong, godly women. They were my father figures growing up. I learned a lot from those two women. I was always keeping my faith and allowing everything to take its course and growing from it and learning from it and becoming better from it.”

His senior year of high school, his mother went to prison for aiding and abetting, and although still having his grandmother around helped, it forced him to grow up faster than most kids. “It all just gave me motivation,” he said. “I was the man of the household since I can remember.” Although football was important to him, basketball became his first love. “Football was only in the fall, but basketball was winter, spring and summer with AAU. There was more interest in basketball and I was recruited at an earlier age so that played a part.”

A point guard for the Redhawks, he finished second in school history with 214 steals, but with one year of eligibility remaining, he wanted to return to the gridiron, and it paid off in a big way.

“I was already in better shape than the football guys, because the type of system that we played with basketball was running — get up and down the floor, press a lot,” Rollins said. “That wasn’t the tough part. It was just getting the flow for playing football again, getting back on the field moving and getting adjusted to the communication. It was kind of all new to me, especially after taking four years away from the game and because I mainly played offense in high school.”

A former running back in high school, he said head coach Chuck Martin gave him the option of offense or defense but told him to be realistic with himself.

“I looked at the career span of a running back in the NFL as opposed to a corner. I definitely had in the back of my brain that I’m trying to get to the NFL.”

He eventually locked down a starting gig at cornerback, and parlayed it into Mid-American Conference defensive Player of the Year award, finishing with 72 tackles, 16 passes defensed and 7 picks.

“I didn’t get my accolades in all my years at basketball, but I’m getting it now in football,” Rollins said regarding the award. “I’m proud to represent the school, my teammates and coaches. But if I could trade that award for a MAC championship, I would in a second.”

After getting the nod to participate in the Senior Bowl in Mobile, AL, Rollins showed scouts why he’s a name to be taken seriously leading up to the combine and draft. He made a nice diving interception in the game, showing off his instincts as well as a nose for the football, two things that would certainly look good in the black and gold.

Up next is the ultimate job interview for him, the NFL Combine, where a prospect’s draft fate can oftentimes be a “make or break” scenario.

“I’m ready to get to the combine and show those guys how quick I can learn and diagnose stuff, and I think they’ll walk away impressed with my board work,” he said. “No, I haven’t played as much football as most guys. But I’ve been out here training in California, got a great position coach who’s teaching me the X’s and O’s.”

He feels the biggest test he’ll need to pass at the combine will be his 40 time, or his straight-line speed, where he predicts a sub 4.5.

The 5-foot-11, 193-pounder has the larger build that Pittsburgh covets in it’s corners, and he possesses the rare ability to instantly shift gears, showing ,fittingly, a point guard’s quickness. He’s also a willing tackler against the run, and importantly for the position, has a short memory. He wants to pattern his game after the best in the league, taking traits of each to add to his own game.

“Sherman’s recognition, Peterson’s speed and toughness, Haden’s ballskills. All of that can help me be a better player,” he said.

He gives credit where it’s due, tracing back to his rough upbringing.

“Always keep your head down, keep moving forward, putting one foot in front of the other,” he said.

He isn’t shy at all about his goals once he makes it to the NFL, however, saying he wants to be respected, and a household name like the previous corners he patterns his game after.

“I don’t want to come off as cocky, but I want to be established.”

The Steelers have struck gold with MAC defenders before, including Hall of Famer Jack Lambert and James Harrison. With their needs at corner, coupled with a standout performance at this week’s combine, Rollins could be very much in play with an early round pick.