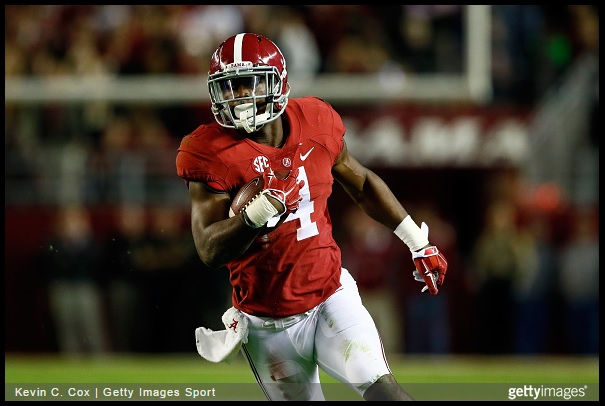 The Pittsburgh Steelers learned last season that having a quality running back to backup starter Le’Veon Bell is a must after losing him for the playoffs due to a knee injury suffered in the regular season finale. After drafting diminutive running back Dri Archer last year in the third round, the Steelers could decide to address the position once again this year and go bigger.

The Steelers will certainly meet with a few running backs this week at the 2015 NFL Scouting Combine and according to Paul Domowitch of the Philadelphia Daily News, they’ve already met with Alabama’s T.J. Yeldon while in Indianapolis.

Alabama RB T.J. Yeldon said Eagles are one of four teams he's met with so far at combine. Others: Seattle, Pittsburgh and Jacksonville.

Yeldon, who battled through toe, knee and hamstring issues in 2014, declared himself 100% healthy Thursday during his talk with the media. He measured in at just over 6’1″ and weighed 226 pounds.

During his career at Alabama, Yeldon rushed for 3,322 yards and 36 touchdowns on 576 carries. He did, however, fumble 10 times in the 39 games that he played in. Only having 9-inch hands might have a little bit to do with that, but there also could be some technique issues that can be tweaked at the NFL level to prevent him from losing the football so often.

While not known as a great pass catcher and route runner out of the backfield, Yeldon did manage to catch 46 passes for 494 yards and two touchdowns during his career at Alabama.

Yeldon is regarded as being a quiet player with a good character and while he had only met with three other teams besides the Steelers at the time of this post, he’s sure to meet with many more by the time he leaves the combine.

This year’s running back class appears to be loaded with mid-round talent, so there’s a good chance that Yeldon will hear his name called somewhere between the second and fourth round of the draft. Should he still be on the board when the Steelers pick in the third round, it will be interesting to see if they pull the trigger on him.

If you missed the breakdown that Luke Shabro did on Yeldon a few weeks ago, you can read it here.

The Steelers can formally meet with 60 players for 15 minutes each while at the combine.