The NFL has just released the Coaches Tape from the Wild Card game. We’ll break down one of the key plays from the Pittsburgh Steelers loss to the Baltimore Ravens. Bernard Pierce’s five yard touchdown run early in the second quarter.

This one isn’t going to take long to break down. You may already be able to spot the issue before we even throw up a single screengrab.

Despite being in their 3-4 on the previous play, the Steelers switch out to subpackage football against a power-oriented personnel. Inside your own five, that’s quite the mismatch.

I went back and looked at how often the Steelers used nickel against 12 personnel throughout the season. Out of 247 opportunities, they used it 19 times, or fewer than 8%. And it was the only time all game the Steelers used that personnel when the Ravens brought in two tight ends.

Suffice to say, it was rare. And with good reason. Not conducive to success.

Schematically, the Steelers’ players aren’t being put in a position to win.

The Ravens align their two tight ends to the boundary side of the field. This creates a natural “over” shift from the Steelers’ defensive ends, a three tech to the strong side and a 2i tech to the weak. 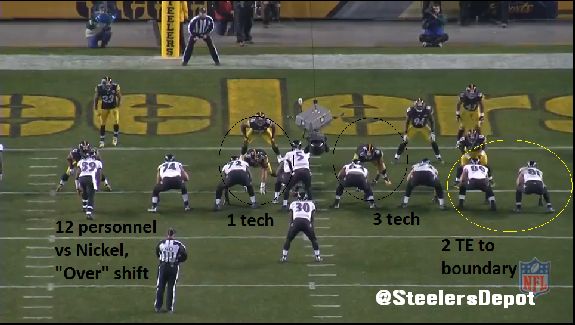 The Ravens also have a nasty split with Steve Smith, aligning him tight to the weakside of the formation. 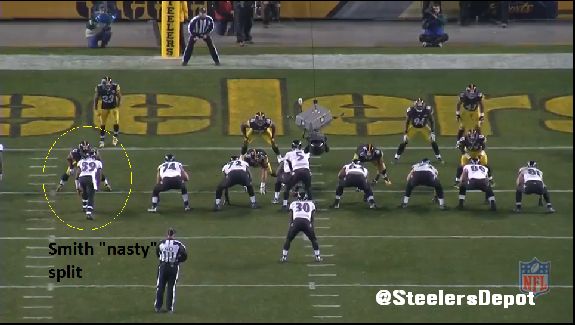 The Steelers correctly flow down the line on this inside zone to the boundary. Can’t play it any other way. 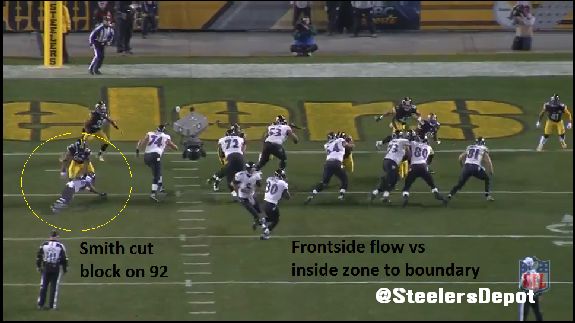 But with the two down front, there’s no one to adequately defend the cutback lane, the backside “B” gap Pierce bends it back to.

Because of the pre-snap shift, Cameron Heyward lines up as the inside shade to left guard Kelechi Osemele, the 2i technique. It’s designed so Osemele can’t cross his face and seal him on a run to the strong side. And that’s the way you have to play it as the end/tackle. But when the run gets cut back? No chance for him to make a play. Automatically sealed the moment Pierce changes direction

James Harrison has the best chance but Smith immediately cut blocks him. Harrison stays on his feet but is tripped up. With how much ground he has to over in a short amount of time, he understandably can’t close. You’re asking a lot if that’s your backside defender. 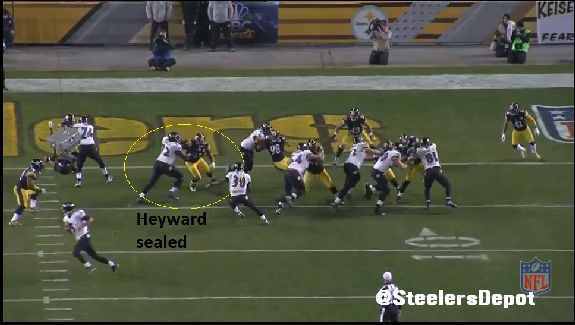 With Smith cutting Harrison and no defensive end to worry about, left tackle James Hurst can freely move into the third level and stick to Mike Mitchell. He’s out of the play as well. 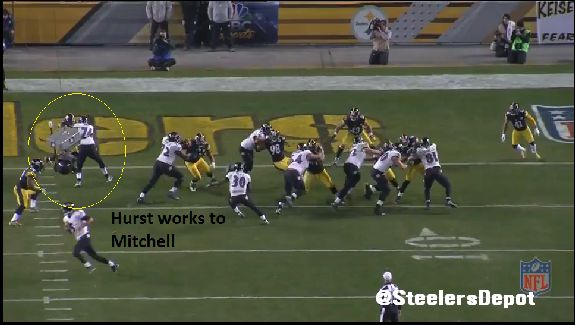 Let’s look at it one more time from the aerial view of the All-22. 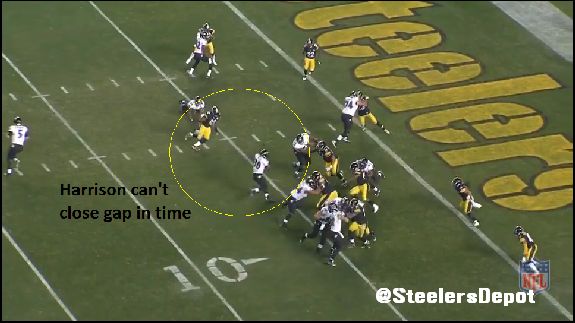 Who is supposed to make the play? Everyone correctly flows down the line on the handoff. You can’t play for the cutback if you’re part of the front seven. Have to start flowing laterally as soon as you recognize the stretch. If not, your “feet are in concrete” and you’ll be late to your front side fill.

If it was a three-down front, perhaps Heyward has a chance to fill. Or Hurst/Osemele can’t secure their blocks as quickly. It’s definitely not going to be as easy for Pierce.

This failure falls squarely on the coaching staff. It isn’t putting your players in a position to succeed. They’ve lost before the snap, a testament to poor coaching. Deep in their own red zone, they have removed a nose tackle and in his place, put 198 pound Antwon Blake on the field.

Why? I don’t have a freakin’ clue.

I don’t usually get on a coaches’ case because their effect can be difficult to evaluate from afar. The players are tough enough as it is.

This isn’t painting with a broad brush and saying anyone is a bad coach overall. But in the moment, it’s a bad play. One that comes at a terrible moment.

It’s painfully obvious there was a breakdown among the coaches on the sideline. That’s the wrong personnel for the situation and it’s not even debatable. And it cost the Steelers seven points.