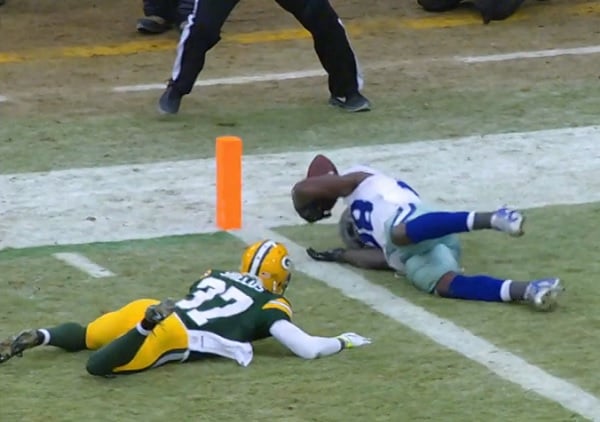 Bad calf and all, Green Bay Packers quarterback Aaron Rodgers threw for 316 yards and three touchdowns Sunday afternoon to beat the Dallas Cowboys 26-21 at Lambeau Field to advance to the NFC Championship Game.

Rodgers, who hobbled around most of the game on the calf that he injured in the regular season finale, completed 24 of 35 pass attempts in the game and running back Eddie Lacy rushed for 101 yards on 19 carries in the win.

After having a controversial call go their way in the Wild Card Game win last weekend over the Detroit Lions, the Cowboys had one go against them late in the game against the Packers.

With 4:42 left in the fourth quarter, Cowboys quarterback Tony Romo appeared to have connected with wide receiver Dez Bryant on 31 yard pass on fourth down that would have set the Dallas offense up for the go-ahead score at the Packers one yard-line.

However, after the completion was challenged by the Packers, referee Gene Steratore determined during a review that Bryant had not maintained possession of the football throughout the catch. As a result of the play being overturned, the Packers took over on downs at their own 33 yard-line and the Cowboys would never possess the football again.

Romo finished the game 15-of-19 passing for 191 yards with two first half touchdown passes. While the Cowboys did manage to rush for 145 yards in the game, it wasn’t nearly enough to overcome Rodgers’ strong second half.

With the win over the Cowboys the Packers will now travel to play the Seattle Seahawks next Sunday at CenturyLink Field in the NFC Championship Game.