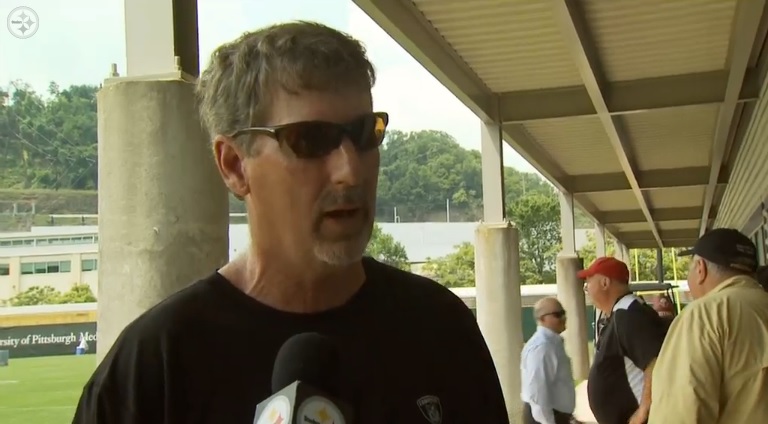 As longtime Pittsburgh Steelers linebackers coach Keith Butler begins his transition from position coach to defensive coordinator, one of the more interesting challenges awaiting him will be, seemingly, finding a way of getting the most out of some of his more high profile players. But it’s certainly a task that he has faced before.

Big personalities and high draft picks abound in recent Steelers history at Butler’s linebacker spot, and he helped mold that unit into what was one of the best in the league for a string of years, particularly during the team’s Super Bowl runs.

When he got here, of course, Butler had to contend with Joey Porter, one of the biggest personalities that the Steelers have ever had in recent memory—but also one of the most talented linebackers as well. Now, Porter coaches under Butler, last year as an assistant linebackers coach, and this year likely coaching the outside linebackers as he helps to fill Butler’s shoes.

Of course, there was the double dipping of Lawrence Timmons and LaMarr Woodley in the first and second rounds of the 2007 NFL Draft. Both players have made it to the Pro Bowl with Butler as their position coach.

Woodley’s case in particular is an interesting one. Timmons is generally a soft-spoken and easygoing figure. Woodley has been more likely to speak his mind. But Butler was never afraid to take him to task, frequently sending him hard messages through the media.

Among those messages was basically a reminder of his place when Woodley complained about dropping into coverage so frequently. But the broadest narrative was in pointing out that the outside linebacker needed to keep his weight in check. In his later years with the team, of course, Woodley suffered a series of lower body injuries. Perhaps Butler knew what he was talking about.

The sternest personality that he ever faced, however, was surely James Harrison, but he was also Butler’s greatest pupil. A Pro Bowler, an All-Pro, and even a defensive player of the year, Harrison got the most out of both his own talents and Butler’s teaching to become, for a short period of years, the best at his position in the league.

Now the Steelers have two young former first-round draft picks at the linebacker spot, whom the team needs desperately to step up in order to right the ship on defense. There is, of course, third-year outside linebacker Jarvis Jones, whose sophomore season was defined by an early injury, and then there is the most recent pick, Ryan Shazier, who also spent a good portion of his rookie season sidelined with injuries.

It will be up to Butler, Porter, and Jerry Olsavsky to build up these linebackers and turn them into the foundation of the next great Steelers defense. Only this time, it will be a defense modeled in Butler’s image, which finally extends beyond the second level of the defense.