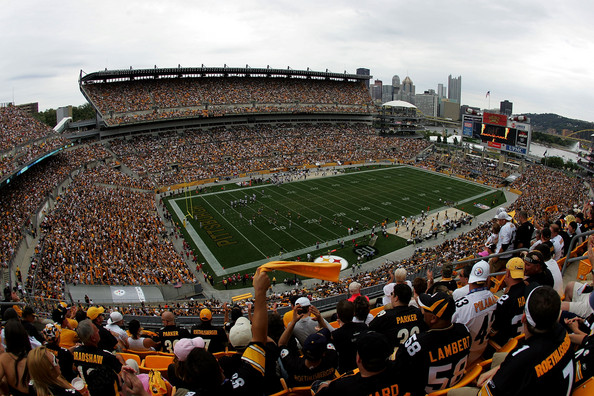 Despite the fact that Heinz Field might be undersized seating wise and isn’t a domed stadium, Pittsburgh Steelers team president Art Rooney II still hasn’t given up hope that the Steel City will one day be hosting a Super Bowl.

“Well, I think my attitude toward it is why not? I think that we have some work to do, but I would say that I wouldn’t want us to say we can’t do that,” Rooney told Barbara Boylan of 1020 KDKA Radio in a recent exclusive interview. “I think our city, with a few more amenities in place – like a couple more hotels probably and we’d have to find a second practice facility for the second team – things like that. But, really, I don’t think that we’re far away from it at all. I just think it would be a great thing for the city and something that we should strive for.”

Now that the 2014 season is over, expansion of Heinz Field is now underway and that will include seats being added to the South Plaza. Rooney talked about that construction just last week when he held his annual end-of-the-season interviews with select members of the Pittsburgh media.

“Construction started, and we expect to have the seats in for the 2015 season,” Rooney said, according to Bob Labriola of Steelers.com. “Our capacity will go up to somewhere around 68,000, which would be good. Looking forward to the improvements to Heinz Field and getting some of our people off the season ticket waiting list. We have already started the process with the waiting list, so there are people who already have been notified that they’re going to be coming off. That process is continuing as we speak.”

While 68,000 seats sure sounds like a lot, you have to keep in mind that the paid attendance last year for Super Bowl XLVIII at MetLife Stadium in East Rutherford, NJ was 82,529. This year Super Bowl XLIX will be played at University of Phoenix Stadium in Glendale, AZ and the attendance there is expected to be in excess of 71,100.

There will additionally always be concerns about inclement winter weather when it comes to northern cities hosting Super Bowls in the future in addition to taking into consideration whether or not the host city has the right size infrastructure in place to host such an event.

“There’s no doubt the number of times it’s going to be outdoors in a northern cities is going to still be limited. But, last year was the test case in New York and it went pretty well. I think it opened the door. I don’t think you’re going to see it every other year or anything like that, but I think it’ll happen again in the future. That’s why I say why not at least have ourselves ready to pursue it when that opportunity comes at some point,” Rooney told Boylan.

By the sound of things I don’t expect we’ll see a Super Bowl take place in Pittsburgh for at least another ten years. The earliest it could be is 2019, but I can tell you right now that that’s not going to happen.