Game notes from the Pittsburgh Steelers Week 13 loss against the New Orleans Saints.

– Not as much to note with the game being a blowout. By the time the fourth quarter rolled around, it became a vanilla, two high defense, against a lot of underneath routes. But we’ll go through some of the highlights.

– Mike Adams, as you’d come to expect, struggled with his feet. Doesn’t move his outside foot laterally, causing him to double over and get beat around the edge. Consistent problem. 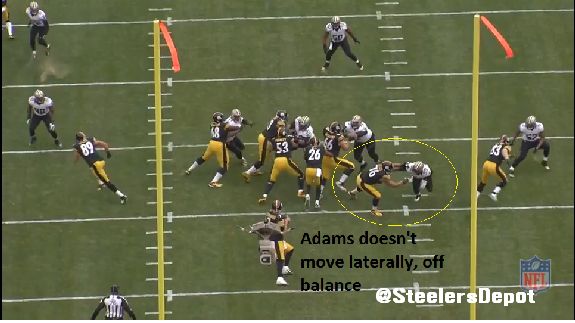 – Saints’ first run of the second half. Cameron Heyward bailed out multiple Steelers (Keisel, Spence, Thomas). Chases this run down from the backside while everyone else is engulfed by a blocker. Huge lane for Mark Ingram to run through if Heyward isn’t there. 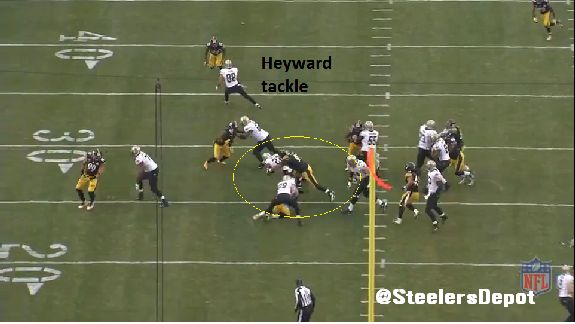 – Ike Taylor had a couple of issues Sunday. Gave up the long touchdown on a double-move, one the Saints love to run and one I’m not totally convinced he couldn’t recover from, and a missed tackle on Nick Toon’s catch.

Ike is driving downhill on the throw then for no good reason, breaks down and sinks his hips. Gives Toon the chance to make a move and Taylor whiffs. This isn’t how Dick LeBeau teaches “tackle the catch.” Once you see the receiver break, click and close, break on the receiver, and drive through. Snap the hips, roll through, bring the receiver to the ground. Ike does none of that. 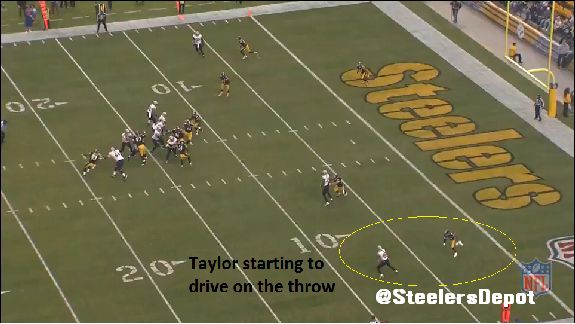 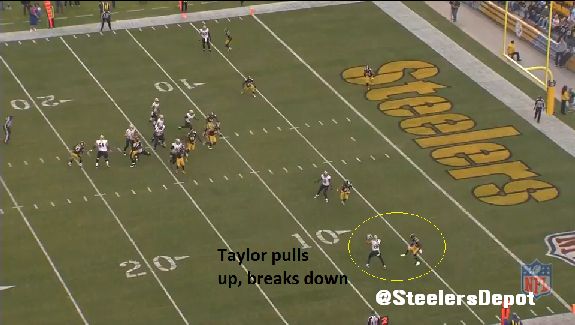 – Heath Miller got blown back on Dri Archer’s carry. Not much the rookie could do to avoid this one. Poor blocking.

– Gorgeous route by Miller to get separation in the red zone but he stumbles over himself and falls. Unfortunate. 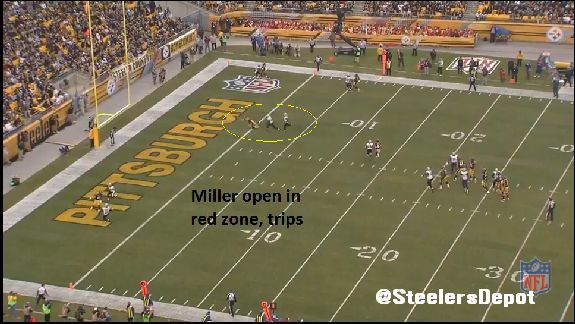 – Subtle but nice seal by Matt Spaeth versus Curtis Lofton on Le’Veon Bell’s one yard touchdown. Doesn’t let Lofton get penetration that would potentially force the play even wider. Bell scoots off the left edge and scores. 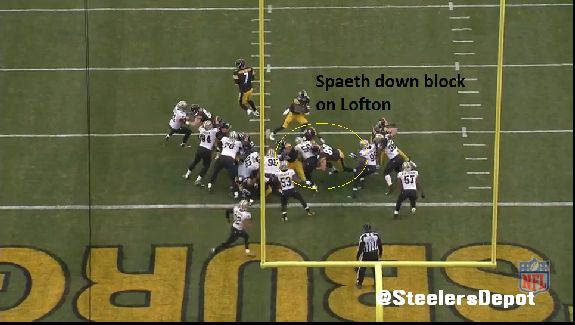 – Will Johnson had a solid day on special teams. Threw a couple nice blocks that set up the solid kick returns. Something the unit has missed a lot in 2014.

– Martavis Bryant showing up the veteran on Bell’s 48 yard catch. Good effort downfield blocking. It may look like Antonio Brown is trying to avoid an illegal crackback here but Brown doesn’t make an effort this whole play, including time he’s behind the DB. If he does anything to block the DB, Bell almost certainly scores. 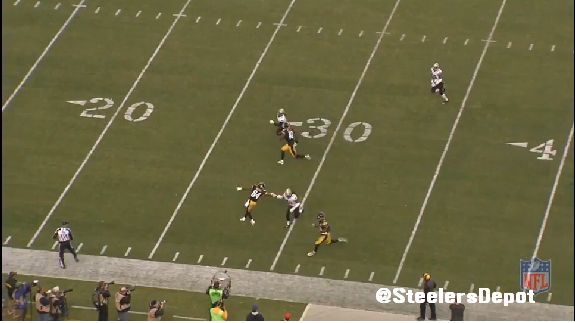 – Marques Colston had the obvious matchup on his touchdown against Antwon Blake. Nothing the smaller corner can do. 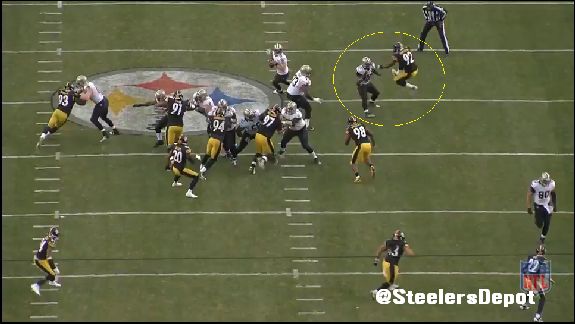 – It might be tough to see so watch it a few times. Mike Adams literally tries to uppercut the Saints’ DL with his left hand mid-way through his block. Not the way Mike Munchak teaches it.

– Stephon Tuitt again struggling against the run. Needs to stay square to the LOS, not turn his back to it. Poor technique. 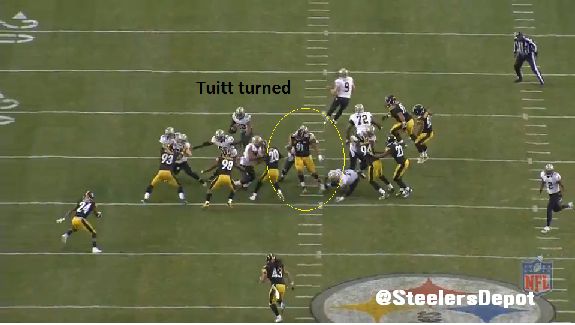 – Will Johnson had a strong game, mainly on special teams. Liked his contributions there.

– Markus Wheaton is weak and has trouble working of jams or general bumps in coverage. Throws him off his route. It’s minute but enough when you’re talking about how detailed NFL route running has become.

– Lance Moore showed some of his best downfield blocking I’ve seen all season. Not that it was great but improved.

– David DeCastro has missed some stunts which has been a disappointment. Maybe it’s because he’s now playing with Mike Adams instead of Marcus Gilbert. I do like DeCastro’s ability to anchor in pass protection. Can get walked back but has the strength to anchor and absorb.

– Mike Adams still with a lot of issues. Don’t let anyone tell you otherwise.

– Tuitt is still struggling against the run. Been watching him in spurts during previous weeks and this kid is lacking functional strength. Honestly, he’s as much a problem against the run as Cam Thomas.

– Jason Worilds again got pressure by the scheme, looping and twisting from his subpackage ILB spot. Not winning off the edge that much.

– Saints used a lot of counters to get the defense flowing and naturally seal themselves off. Opened up cutback lanes. Cincinnati Bengals, using a similar scheme, will probably repeat that. Let’s see how the Steelers’ adjust.

– To end, a look at Brett Keisel’s presumed final play of his career. In true fashion, he sheds the left guard and hustles to help make the tackle. We’ll miss you, 99. 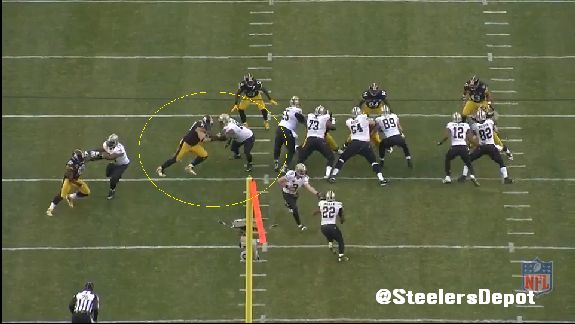 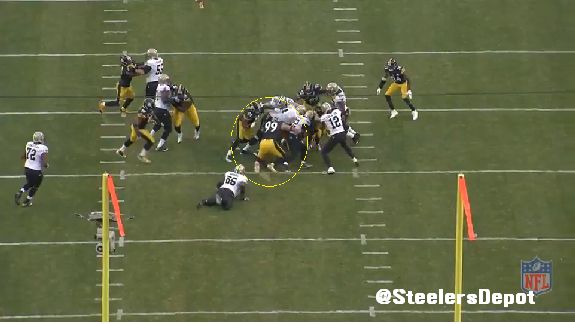 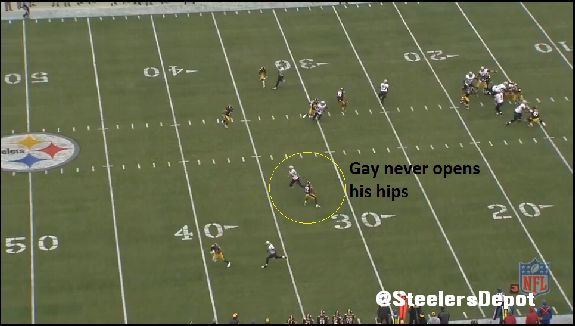