Nothing about James Harrison is conventional.

He began his career as an afterthought. Undrafted, cut repeatedly, spending time in NFL Europe. Almost became a veterinarian. Few players have emerged from those depths to become the player Harrison is.

He’s a man who is seemingly good at everything. A two-time Super Bowl winner, a conference defensive player of the year recipient. He’s “good” at acupuncture, if there is such a thing. 300 hundred needles into his body at least twice a week, every week.

He retired. Now he’s back.

And at 36, he’s still shows flashes of the menace he was while in his prime. At times this season, it’s hard to tell he ever left it.

Most pass rushers avoid contact from offensive lineman. Let an offensive tackle get ahold of you and the battle is over. Instead, the goal is to defeat the lineman with speed he can’t match. Use your long arms to reach into the pads of the tackle, keeping him at bay. Personal space is a pass rusher’s best friend.

And that’s the final thing that makes Harrison unconventional. That’s not how James Harrison makes his money. He doesn’t deny who he is. He can’t avoid contact when the opposing tackle has arms that are three inches longer. And he doesn’t have the first step to simply win the edge.

And so we’ll dissect Harrison doing what he does best, getting to the quarterback. And there aren’t many games a better example of this than what he did to Kansas City Chiefs’ left tackle Eric Fisher Sunday afternoon.

His most effective pass rushing move, really, his only one, is his rip. There’s no hiding it. No offensive lineman is unsure of what they’ll be seeing. Harrison is 36, he’s not changing now. Although you could argue Harrison has never changed.

The rip starts always the same. He’s running at the tackle, not around, eliminating, by his own choosing, the personal space most defenders covet.

Using his height to his advantage, he drives his inside shoulder under the chin of the tackle. Harrison drops his inside arm, leaving it to dangle. Daring the offensive tackle to engage. Mike Tomlin always preaches not to live in your fears. Which is good – I don’t think Harrison has any. 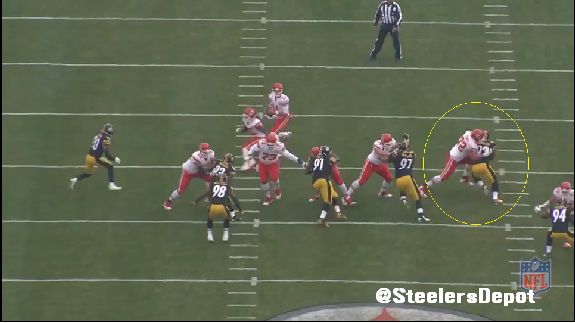 Although at 242 pounds, he is not skinny by any conventional methods, he manages to look the part when he rushes. Because of his height and the nature of the rush, there’s nowhere for the tackle to punch. It’s trying to hit a revolving door.

Like many other tackles before him, Fisher’s “punch” winds up looking more like a bear hug. His arms are extended but rendered ineffective. This allows Harrison to begin to rip through. He hooks his inside arm, no longer dangling, underneath the outside arm of the tackle. 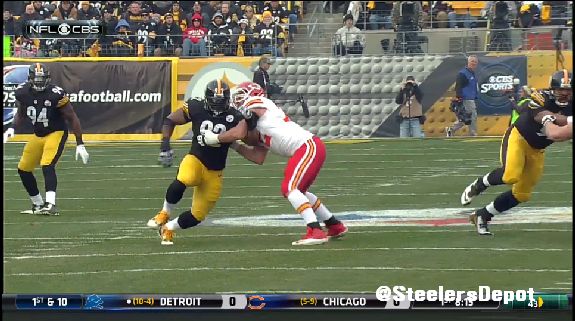 It then comes down to a matter of force. Using his strength and ankle flexibility, he forces the tackle to disengage. It sounds repetitive but it all circles back to Harrison’s height. Opposing tackles are more likely to bend at the waist to get to Harrison’s level, sapping them of a clean base to generate power. 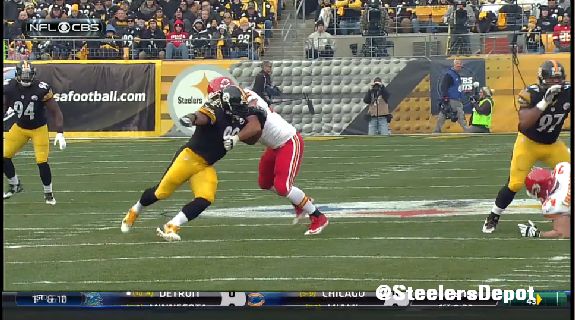 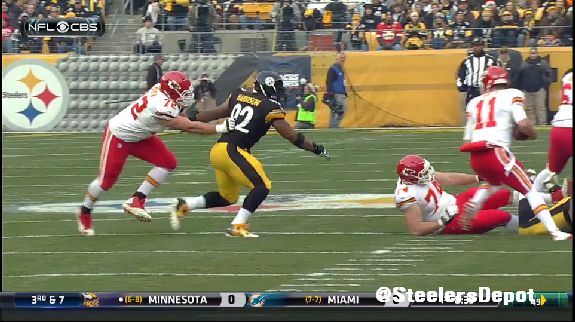 This is the story of a man who, at 36, has kept his “young man” strength. A player still capable of doing pushups with the team’s starting center on his back. But someone who combines that with a perfected technique.

He’s the football version of a con-artist, a compliment of the highest order. Sells you what you want to hear. “Hey, hit me.” The offensive lineman, as they are engrained to do, oblige. And then Harrison uses that predictability against them.

He is the oldest player in Pittsburgh Steelers’ history to reach 5.5 sacks, as he’s done in 2014.