When the Pittsburgh Steelers get the chance to play with the lead, they tend to like to use more 12 and 21 personnel. Sometimes they like to use two tight ends in the beginning until they’re trailing as well.

But they haven’t been trailing very often recently, and the playing time for Matt Spaeth has risen. In fact, he’s put together two very nice games in the span of the last three, including the most recent against the Baltimore Ravens.

For once, he even got to play receiver for the first time this year. He was the last skill position player on the roster yet to catch a pass this season from Ben Roethlisberger, but he also became the first player to catch a pass from punter Brad Wing as a bonus.

But, of course, his primary function, as it always will be, is run blocking, and he had some nice clear out blocks on the perimeter against the Ravens in this game.

On the first play of the Steelers’ final possession of the first quarter, Spaeth lined up on the left side as the lone extra in a three tight end set, with Courtney Upshaw looking to charge inside. The tight end, however, was quick enough to catch him and drove him off the ball, even if the play only produced a short gain. 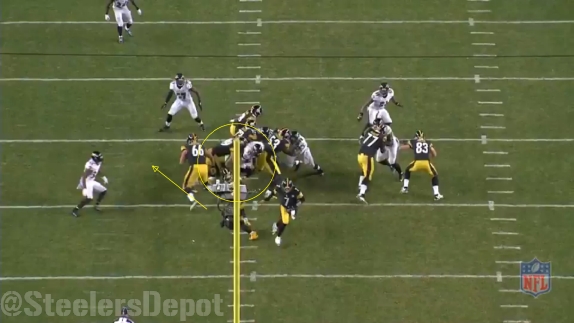 He had a similar assignment just a few plays later on a similar carry, though coming out of a different personnel set. Spaeth cleared out Terrell Suggs cutting inside, but a pulling David DeCastro failed to block either Raven waiting to bring the back down.

To end the quarter, the Steelers ran a modified end around on a short pass with Antonio Brown, with the tight ends serving as the outside blockers up the right sideline. Spaeth passed off the nearest defender to clear out the cornerback and open space for Brown to maximize his real estate for six yards.

After the Steelers closed the first half by jumping out to a 20-10 lead, Shaun Suisham was back to put the extra point through the uprights, but as we all know, it didn’t wind up that way. The holder, Wing, wasn’t able to get the ball down in time, so Suisham was forced to abort the attempt.

This didn’t work out so well against Tampa Bay a few weeks ago, but it turned out well on Joe Greene night. Once Spaeth realized the gaffe, he took off to the end zone and made him available, securing the two-point conversion for his first touch of the year.

The veteran tight end got a taste of the end zone, and he would not be denied in the future. Roethlisberger said after the game that he deserved this one for all of the grunt work that he does, but I just want to highlight how much traffic he had to clear through at the line of scrimmage just to make this play feasible. And it was on fourth down.