Outside of some early struggles in defending the run, trying to contain Michael Vick, and one really bad pass play, the Pittsburgh Steelers defense actually had a pretty respectable game against the New York Jets.

The home team only put up 20 points total, which was aided by four turnovers from the Steelers’ offense and special teams. Only three points came in the second half.

Defensive end Cameron Heyward was one of the few consistent presences for the unit in last week’s game, particularly against the run. As a matter of fact, he seems to have overcome some of his early season struggles and is looking like who he was last year again.

Toward the end of the first quarter, already up 10-0, the Jets were looking to get into the end zone on second and goal from the two. Heyward had other ideas on the down, although it only delayed a score for one play.

The Steelers were in their base defense, but Heyward was on the left side with Brett Keisel in the game. off the snap, he bull rushed the right tackle, driving him into the backfield, shielding him off with his right arm while using his left to grab Chris Johnson and drag him down for a three-yard loss. Great individual effort here.

Late in the first half, in the nickel along with Keisel, Heyward and the defense was able to force a third and long on the Jets. While Vick managed to convert to Percy Harvin, the fourth-year defensive end nearly got to the quarterback in time by looping around the left guard. 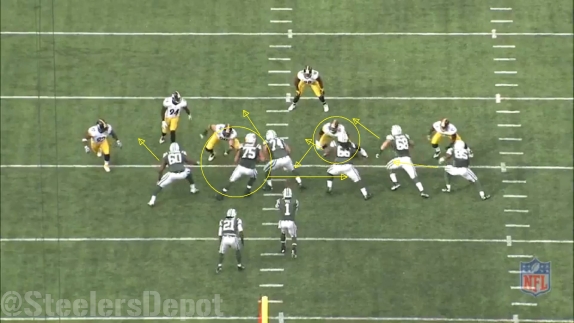 Later on the drive, the Jets tried to open up space with a lot of post-snap movement, pulling the left guard and using the right guard to down block on Heyward. 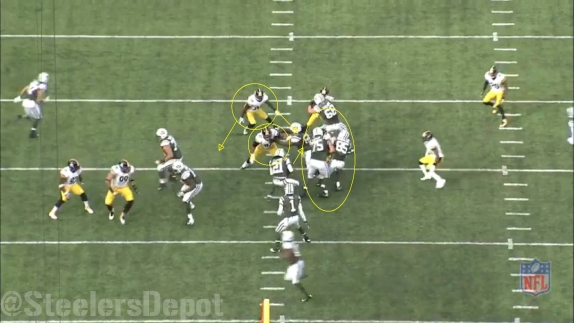 Heyward blew up New York’s scheming, winning the inside against Willie Colon and holding position, waiting for Johnson. With the pulling guard backed up as a result, the running back had to try to cut his losses, trying to run behind Colon, but that just filtered him into the linebackers.

That play set up a third and 15, and Heyward might have gotten to Vick on this play had Jason Worilds contained the right side. Heyward beat Colon with a spin move inside and had a line to the quarterback, buy Worilds’ wide rush left space open for Vick to scramble. He was tackled well short of the first down, and it could be argued that Heyward should have had a fumble recovery at the end of the run.

After that play, Antonio Brown muffed the punt, and the Jets took over again at the Steelers’ 28. Heyward lined up head on over right guard, but he moved inside around the left side of the center, who was not expecting the move and allowed him to pass, allowing him to get the first hit on the running back in the backfield.