The Pittsburgh Steelers were somewhat forced to bring back former outside linebacker James Harrison following the third game of the season when starter Jarvis Jones went down with a long-term injury that will continue to keep him out for at least three more games.

In the five games he has played, he has fairly consistently averaged about 30 snaps a game, having play 147 total, with his tow highest season totals coming in the past two weeks.

His performance has followed a somewhat similar trajectory, maintaining a general level of consistency with gradual increases in production. But, like his snap count, he is most certainly still notably less than what he once was.

Of course, Harrison, now 36, was not brought in to be a starter on this defense. Free agent signing Arthur Moats has been the starting right outside linebacker in Jones’ absence, and while Harrison has perhaps logged a bit more time than expected, Moats has still taken the majority of reps.

Of course, the story of his last game against the Indianapolis Colts will focus on the fact that he recorded not one, but two sacks on Andrew Luck, which was his 15th career multiple sack game with the Steelers. And those are obviously significant contributions. But he was able penalized twice in the game, and his play against the run did leave room for improvement. 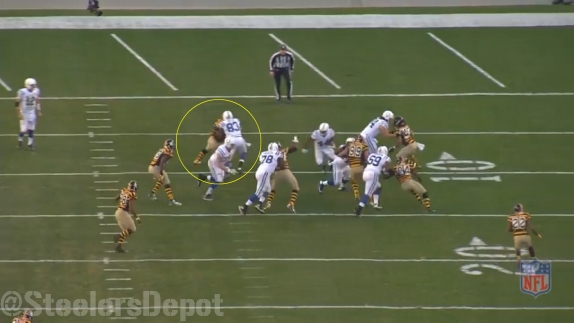 To say that his work against the run left room for improvement is perhaps a bit unfair, however, because the Colts only ran the ball twice while he was in the game due to the fact that they spent so much time in the game trailing by multiple possessions.

One of those two runs was to the opposite side of the field. But this early second quarter run, despite the fact that it wound up only as a one-yard gain, showed poor defense. He tried to rush inside the tight end on a run bouncing to the outside. The tight end got a hold of him and pushed him into the backfield. It was the work of the rest of the defense that bottled him up.

But one cannot ignore his work as a pass rusher, working against left tackle Anthony Castonzo. Facing a second and five, Harrison showed some burst in dipping his rush shoulder under the tall offensive lineman and getting around the corner, from which point he was able to rip and release, drilling Luck from the blind side for the sack.

Harrison got to Luck again about 10 minutes later in game time, in the early stages of the second half. The Colts this time faced a second and 10 when Harrison bull rushed the left tackle and held point until Jason Worilds flushed the quarterback to the right, where the veteran rusher was able to clean up for the sack.

He may have had a third solid opportunity for a sack late in the game, has Castonzo not pulled him to the ground, which drew a holding call. The left tackle knew he was beaten, as he was already leaning as Harrison began to rush by, so Castonzo yanked him down with him by the neck/shoulder pad area. The Steelers will need more of this from Harrison going forward.