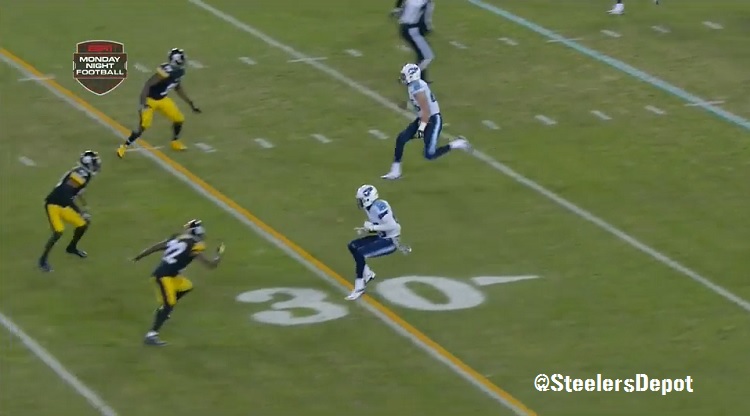 Pittsburgh Steelers cornerback William Gay has a history of wanting to jump routes and Tennessee Titans head coach Ken Whisenhunt and wide receiver Nate Washington were both well aware of that heading into Monday night’s game. Thanks to them both knowing Gay’s tendencies, the Titans were able to burn the Steelers cornerback with 44 seconds left in the first half.

“You know going into the game, Coach Whiz and Nate (Washington) had a lot of experience on some of their guys and we knew that #22 (William Gay) had the tendency to jump some routes and we wanted to get a double move on him,” Titans rookie quarterback Zach Mettenberger said after the game.  “We’re fortunate we got the opportunity for a good look.  Nate ran a fantastic route and beat the guy.  Really that’s just an opportunity where you don’t want to over or under throw the guy because he’s so open but that’s just a heck of a play by Nate.”

Working out of a bunch formation to the left on first down, Washington was able to get Gay to bite on a double move with the Steelers playing cover-4 (quarters) coverage.

As you can see in the animated gif and still pics below, Washington baits Gay into trying to jump a hook route by sinking his hips. He then releases on the double move and Mettenberger easily connects with the former Steelers wide receiver over the top.

If any Steelers defensive player should have intentions of jumping this route, it should probably be safety Will Allen, not Gay, unless the two had communicated a different cut call.

Steelers head coach Mike Tomlin refused to place blame on either player after the game when asked if Gay should’ve had safety help on the play.

“I’m not getting into all of that. I said we accept responsibility for it and I tip my cap to those guys for good execution,” he said.

With less than a minute to go in the half, Gay has no business getting greedy as it was his job to protect the deep outside quarter of the field. He was given a gift on the Titans first offensive play from scrimmage when he a returned a poor first throw of the game by Mettenberger 28 yards for a touchdown. He returned the favor on the rookie quarterback’s final throw of the first half, however. 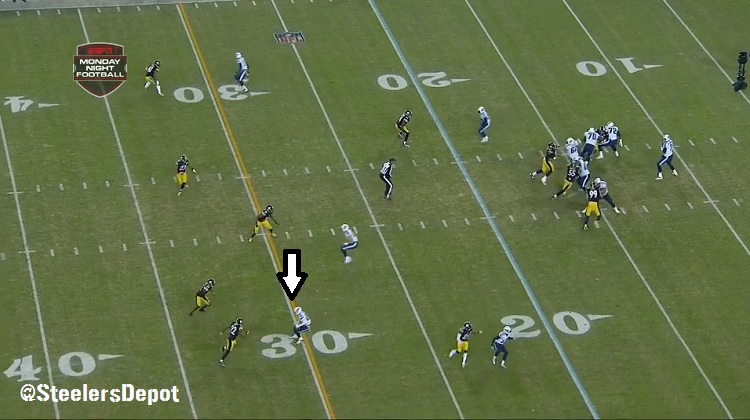