– The Titans are one of two teams in the NFL with a rookie quarterback and running back – Zach Mettenberger at QB and Bishop Sankey at RB. The Minnesota Vikings are the other with Teddy Bridgewater and Jerrick McKinnon.

– Mettenberger took a big step forward from his first start in Week Eight to his second in Week Nine. Ball came out a little quicker and accuracy improved. Was able to shine and drive the ball down the field, even if the numbers don’t reflect that.

– Still, he’s going through the typical growing pains of a rookie QB. Holding onto the ball too long, leading him to be sacked seven times in his two starts.

He’s struggling with his accuracy on throws 5+ outside the numbers. According to Dave Bryan’s charting, he’s 8/18 with an INT the last two weeks on those types of throws.

Here’s an out route from the far hash he horribly misses behind. 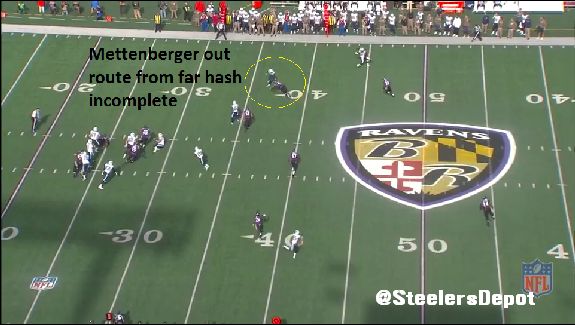 He’ll double clutch some throws, clearly still trying to process information. Steelers should be able to confuse him with advanced concepts.

Overall, a rookie QB still trying to feel his way through the league.

– I didn’t get a great look at Bishop Sankey but he possesses some wiggle and leg drive. Also has seven receptions in his last two games.

Jackie Battle has been getting a run at fullback. Only four carries this season but 70 snaps on offense. Also used as the upback and on the punt coverage unit.

Leon Washington is used as the team’s third down back. Despite his small statue, he does a respectable job in blitz pickup.

– Not a lot to note at the receiver core from the tape. Kendall Wright is a smooth route runner who quickly gets out of the top of his breaks.

Justin Hunter looks good getting off the bus (6’4 203) but his production is one of the worst in the league. 21 receptions for 368 yards and 2 TDs over 467 snaps. Of the wide receivers in the league who have played more snaps, only Seattle’s Jermaine Kearse has fewer receptions.

Delanie Walker is unlikely to play after suffering a concussion against the Baltimore Ravens. That’s a critical loss for the Titans’ offense. Walker leads the team in receiving yards (512) and is only one reception behind Wright for the team lead.

The adage of rookie QBs leaning on their tight ends proves true here. Mettenberger targeted Walker 14 times in the six quarters they played together, more than any other Titan. Walker was targeted on four of the first five Titans’ third downs last week before leaving with his injury.

In other words, Walker was his security blanket. Him not playing would be a big loss. Pay close attention if he’s on the inactive list. The “X” factor.

Tight ends Craig Stevens and Taylor Thompson landed on IR leaving Chase Coffman and Richard Gordon to split snaps in Walker’s absence. They have a combined 10 catches across eight seasons.

– Taylor Lewan has replaced Michael Roos (knee) at left tackle and done a fantastic job in pass protection. Great job laterally, even holding his own against JJ Watt. Anchors and Watt ends up falling into the ground here. Don’t see that too often. 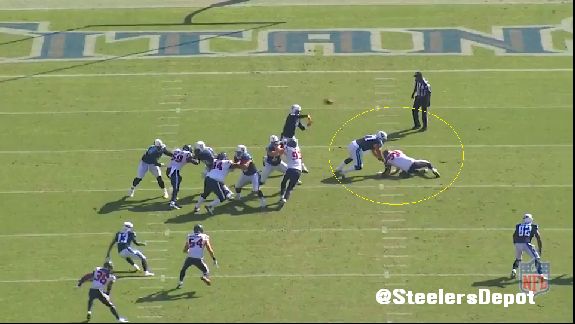 Other, non-mom’s basement relate media circles have highlighted Lewan as having a great rookie campaign, too. Run blocking could use some work though. Doesn’t get a great push and can fall off his blocks.

Same can’t be said for former Raven and current Titans’ right tackle Michael Oher. Susceptible to being beat inside and I think that’s due to him oversetting on his kickslide as Terrell Suggs gets him inside. Can see it below. 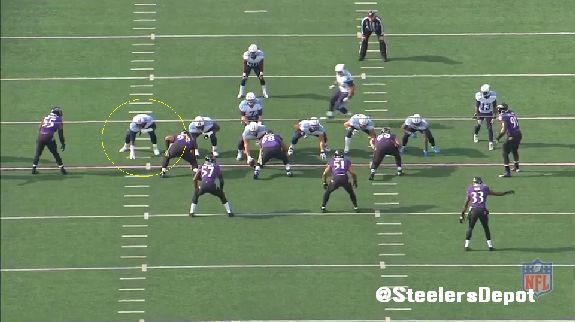 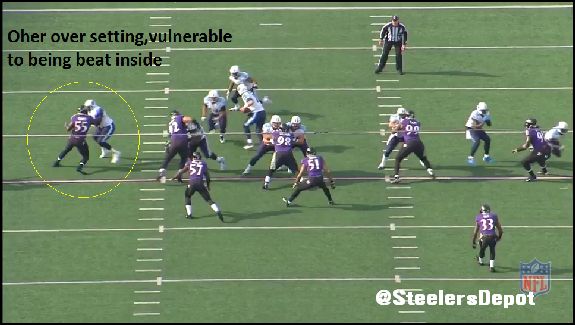 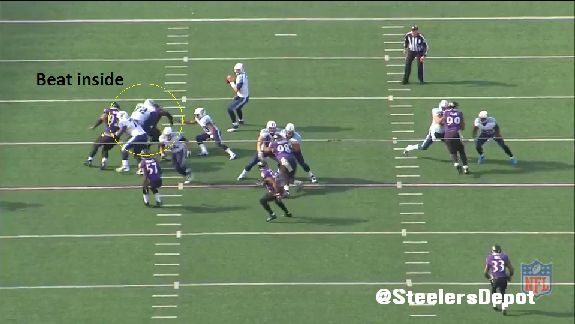 Prized free agent from a few seasons ago left guard Andy Levitre is much quicker at his combination blocks than right guard Chance Warmack. Back-to-back plays from the Ravens game off the same exact scheme. Levitre able to stick, Warmack is late and chasing. Linebacker makes the tackle. 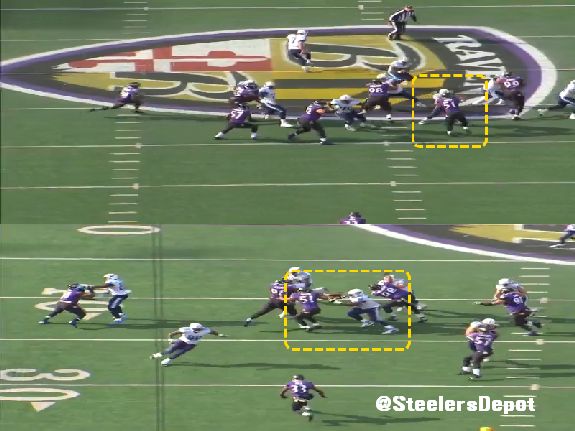 Focus will be on Sean Spence to get fill his gap quickly and work off blocks. He’ll be the one dealing with Levitre.

– Center Brian Schwenke is a rookie out of Cal. Up and down two games I witnesses. Only has 32 inch arms for a 6’2 frame. By comparison, Daniel McCullers had 36 5/8 arms. Advantage McCullers.

– Thought overall, the Titans do a nice job in blitz pickup. Not a lot of miscommunication despite having a line with two rookies and one second year player.

Here’s the line masterfully picking up a Double “A” gap blitz, giving Mettenberger a clean pocket. 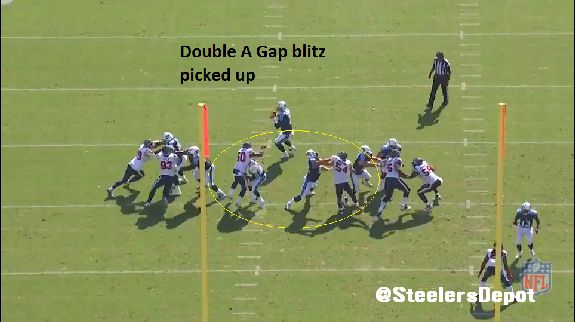 And do a nice job securing this three man overload to give Mettenberger a clean pocket. 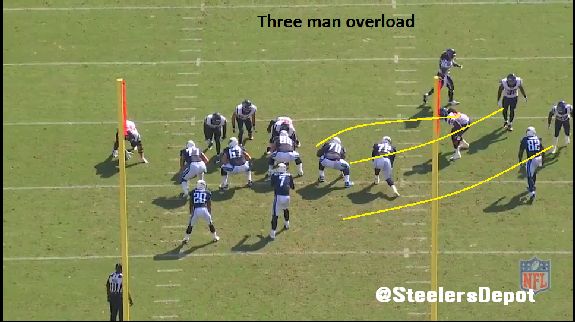 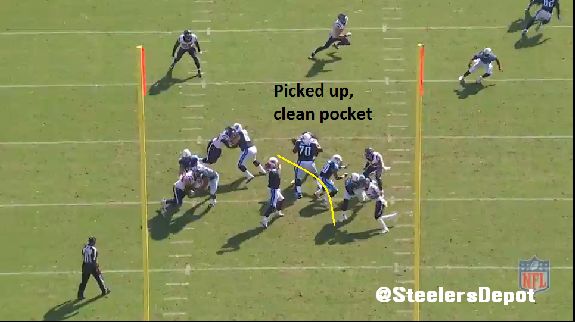 – One situational look the Steelers must be prepared for. Defensive end Karl Klug has played six snaps on offense in 2014, all coming within the last four games. He’s used as a FB in short yardage work, 3rd and 1. Of those six snaps, the Titans have run it five times. They’ve used Power O, pulling the guard to the side of the formation Klug is at on four occasions. So almost certain to get Power O if/when Klug is in the game. Pretty clear tell at this point.

– The Titans do use their fair share of zone concepts and outside stretches.

– Check out my Chalk Talk to break down all the crazy looks defensive coordinator Ray Horton offers. I’ll repeat the stat I used in my video.

In the last four games, when the Titans have the opposing offense on 3rd and long (7+) and using a non-vanilla coverage (anything that isn’t a four man rush, seven drop), offenses have converted just 25% of the time, allowing one touchdown, picking off a pass, forcing five sacks, including a fumble the Titans’ recovered.

– Times where they’ll drop their big uglies into coverage, send just two, and still get pressure. Don’t be shocked one bit when one or both of the DL bail out and play zone. Titans have to do it more than anyone else in the league. Must be a fun defense to play in. 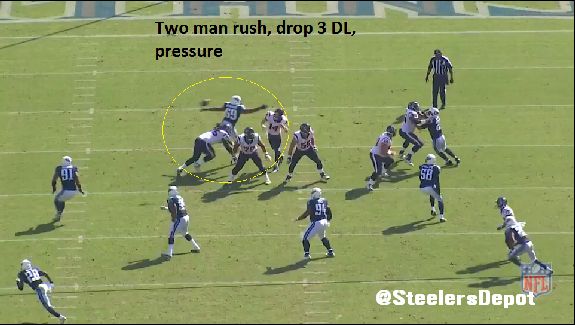 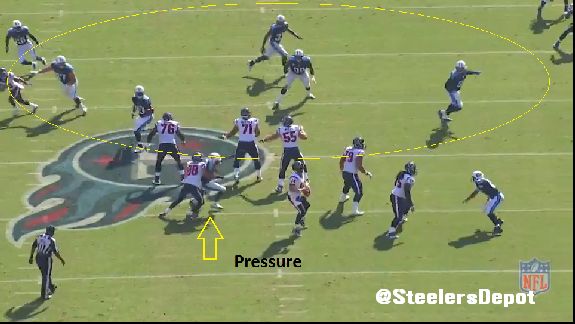 – The Titans technically are a base 3-4 defense but use 4-3 looks on 3rd and long as well as a ton of subpackage football.

– Jurrell Casey is one of the best albeit criminally underrated DT in the league. He’s got four sacks, more than Jason Worilds.

Penetration to force the back wide below. 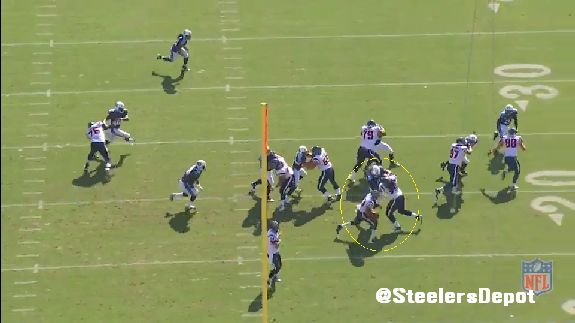 Woods has shown the ability to win off the line with a relatively quick first step and bully centers into the backfield, creating penetration and forcing the play wide.

Two pictures below, both against centers. One against Alex Mack, another against Jeremy Zuttah. Same result. Woods being disruptive. 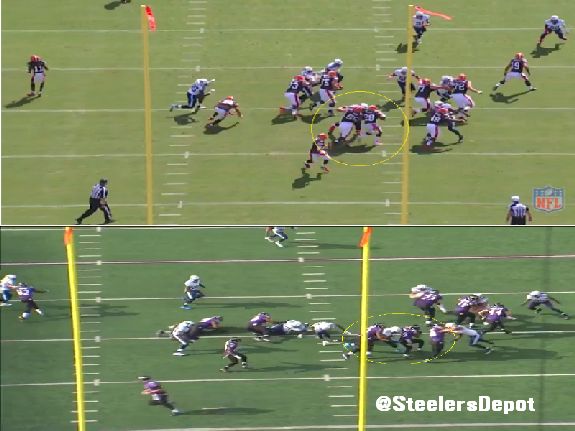 – Maybe it was the two games I watched but the pass rush didn’t seem that successful. Outside of Casey, I didn’t see a whole lot. Think that’s created more by scheme than it is individual execution. Horton does a nice job of masking the deficiencies the defense has.

As a whole, the Titans’ defense ranks tied 10th in the league in sacks with 24. But Casey is the only front seven player with more than two, a fairly staggering number.

Safety Michael Griffin is second on the team in sacks with three, illustrating the lack of a pass rush up front and the scheme wins for the Titans’ defense.

Derrick Morgan has never really lived up to his first round billing, He has only two sacks across 542 snaps. Scant production.

– Linebacker Avery Williamson (#54) initially impressed me on tape but then faded away. He’s got ten tackles in each of the last two weeks. But nothing on tape really jumps out for me.

– Griffin leads the team in tackles, is second in sacks, and tied for the team lead in interceptions (two). He’s one of just eight players in the NFL to play 100% of his team’s defensive snaps.

– Safety George Wilson is still hanging around. Always been a personal favorite of mine. Not great but consistently good. Former WR just doing his thing.

In Week 8 versus the Houston Texans, Stafford – acting as the third safety – saw 36 saps. They like to use their speed and athleticism to contribute to the chaos on defense. Especially on 3rd and long.

Examples of the personnel groupings below. 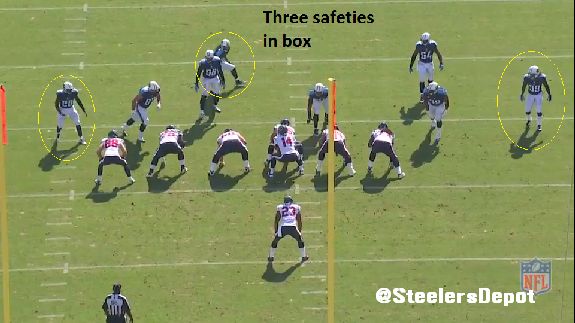 Steelers must move the sticks on first down as not to get behind the chains and play into the Titans’ hands.

The Titans are exposed when they play vanilla. It’s a young secondary. Blidi Wreh-Wilson and Stafford are in their second year while Marqueston Huff is a rookie.

And they screw up when they’re vanilla. Simple concepts beat them. Texans motioned Arian Foster from the backfield out wide and the Titans never adjust. Easy six to Foster on an out route. 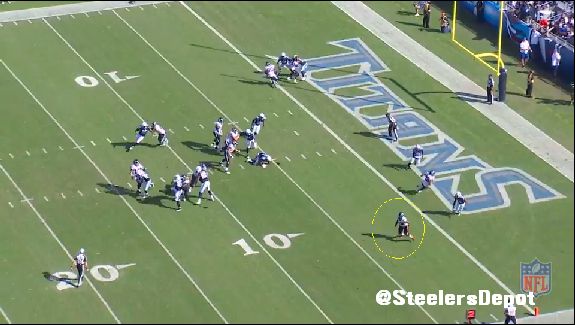 Why the scheme is so important. Lot of mental mistakes to compensate for.

– One last note on the defense. Despite suffering only one major injury during the season (Bernard Pollard) they’ve had 20 players rack up at least 19% of defensive snaps in 2014, tied for the most in the league. The four other teams are: Atlanta Falcons, Chicago Bears, Tampa Bay Buccaneers, Jacksonville Jaguars. Including the Titans, they have a combined record of 10-36.

– Brett Kern is eighth in net average at 41 yards per punt.

– Leon Washington isn’t the same threat he once was; he has just one return for more than 30 yards in 2014.

– One note on the coverage unit. Huff, the aforementioned rookie, is an awful gunner. Watched every punt the last two weeks and he might have graded out positively on one of those. Can’t get off blocks, on the ground too much (one time tripping over a photographer or someone five yards deep on the sideline) and the few times he does get down cleanly, he has a tendency to get out of his gap or slip and fall.

Snapshot of his woes. KR already with the ball and Huff isn’t anywhere close. 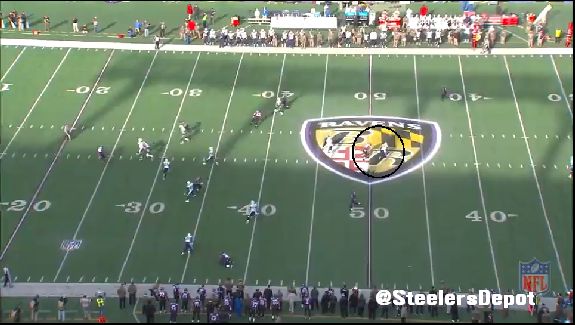 Double-vice him and run to his side. Major weakness. Metrics agree with me, too. PFF has him as a -6.0 on the season on STs. Think Antonio Brown can break a big one if he gets a return to Huff’s side.