Brief scouting report on the Baltimore Ravens based off their loss last week against the Cincinnati Bengals. As always, the disclaimer is a little bit of knowledge can be a dangerous thing. This scouting report isn’t the say-all, end-all for the Pittsburgh Steelers tonight.

He felt ghost pressure repeatedly, leaving the pocket unnecessarily. Creates easy angles for defensive lineman. No longer have to work through the offensive line. Couple examples below. 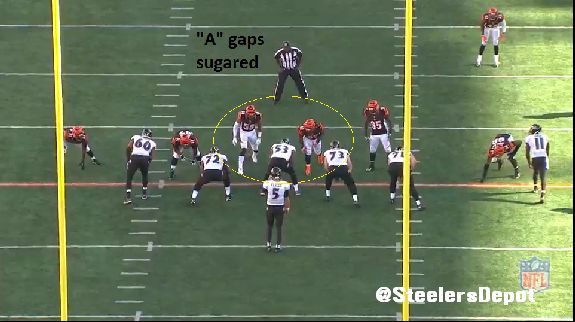 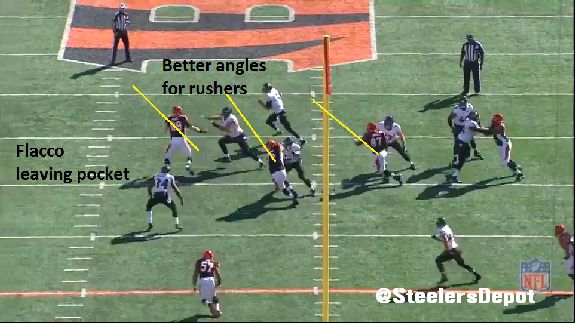 His base was unsound. Flat footed on this throw. Receiver does fall down but it doesn’t excuse this horrid footwork. Not driving off a front foot or rolling his hips through this throw. 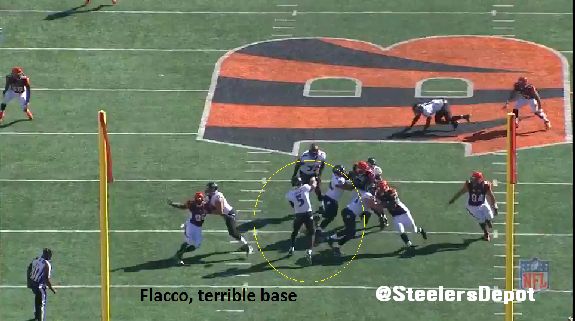 His two interceptions were ugly and it didn’t look like he read anything post-snap. Predetermined of where he was going to go with the football. 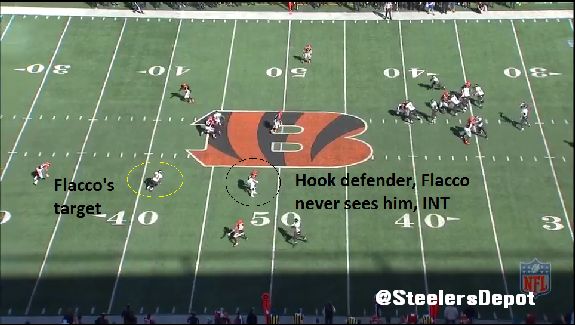 Flacco isn’t always that bad but his performances run hot and cold.

– The running game has stabilized. Justin Forsett has 274 yards rushing the last three weeks. Lorenzo Taliaferro, a rookie who’s pass protection jumped out to me on his college tape, leapfrogged Bernard Pierce to be the backup backup.

While both are averaging healthy YPC, 5.5 and 4.4 respectively, I wasn’t very impressed with either. They both find the open lane and don’t dance but I’m not sure if either broke a tackle against the Bengals. Get what is blocked and not a ton more.

Forsett is third on the team in receptions with 26, despite playing less than 60% of the snaps in 2014.

– Kyle Juszczyk is the most often used FB in the league from a snaps and percentage perspective. 205 and 42.6%. He’s a strong lead blocker who can search through the line and find work. The Ravens will line him out in the slot, too.

They’ll throw in wrinkles with him, too. Cut blocks off the line, gets up, and releases into the flat on a screen pass. Bengals leave it uncovered and it goes for a 21 yard gain. 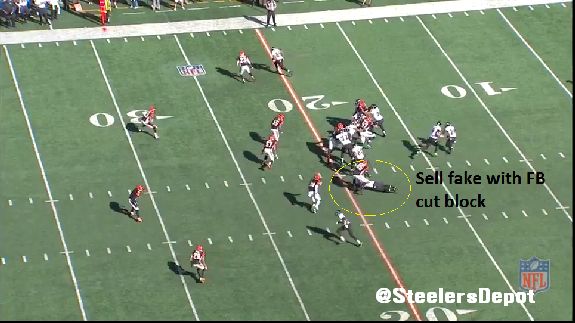 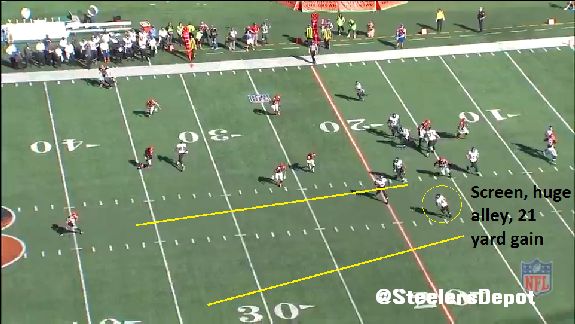 He has nine receptions this year. Three of which have gone for 18+ yards.

– The offensive line must be thankful for the return of left tackle Eugene Monroe. He does a fine job of sealing the edge and working rushers up the arc. Look how far he pushes the end up on this speed rush. 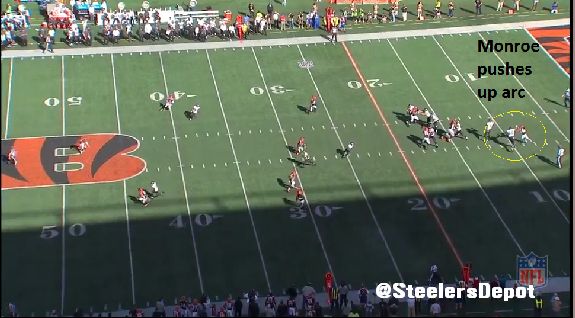 Also gets a push in the end game with an excellent down block to create a running lane. 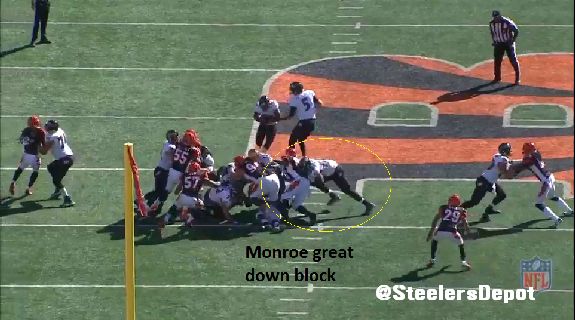 – Kelechi Osmele has some nasty in the run game but is only average in pass protection. Won’t always move his feet and has a tendency to lunge. 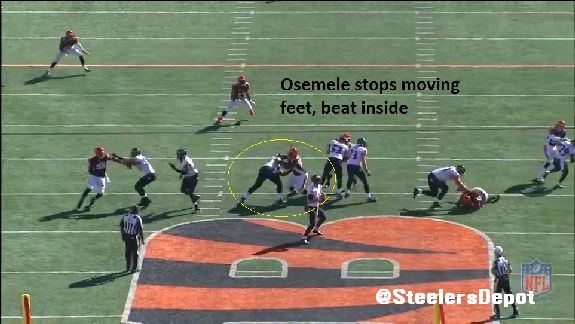 Ricky Wagner has difficulty anchoring versus bull rushes and has always been a weak link along the offensive line. 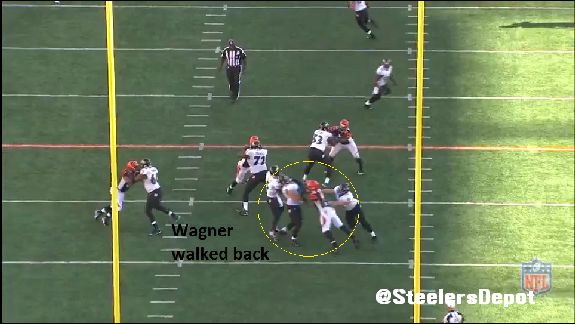 – Torrey Smith was held reception-less last week but had come out of his shell the weeks prior. Three touchdowns the weeks before. Expect multiple vertical shots to #82 tonight.

Steve Smith has more than doubled the receiving yards of the next closest Raven. His 16.5 yards per catch would stand as the second highest of his career. He’s 35. That shouldn’t happen. Smith found the fountain of youth and is a YAC threat.

Keep an eye for when he’s lined up in the slot, be it in a two or three receiver set. Alert for play action with Smith running a deep crosser. Route concept the Steelers have had trouble defending throughout the year.

– While the Ravens are a predominantly zone scheme, like any offense, they’ll mix it up. Here’s them running G-Lead with Marshal Yanda for a big gain. 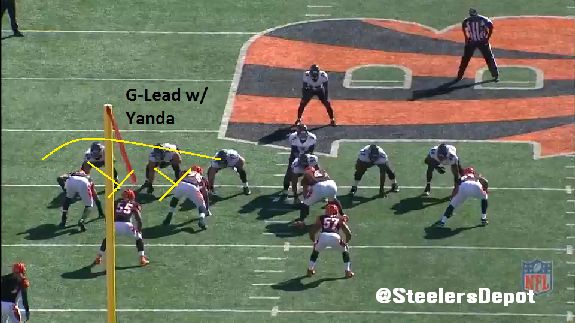 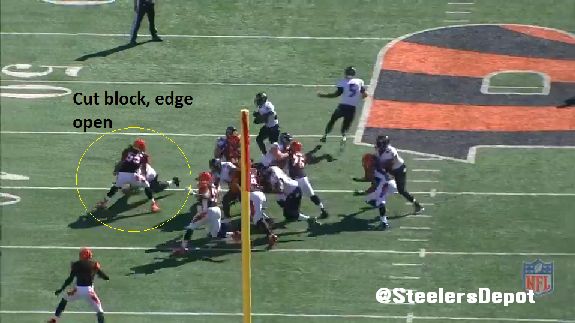 – They do get a push off the line and can wash lineman, creating easy cutback lanes. Look how far this combination block pushes back star defensive tackle Geno Atkins from the line of scrimmage. Lot of room for the back to work with. 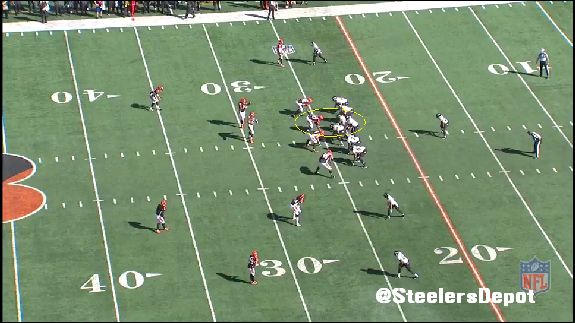 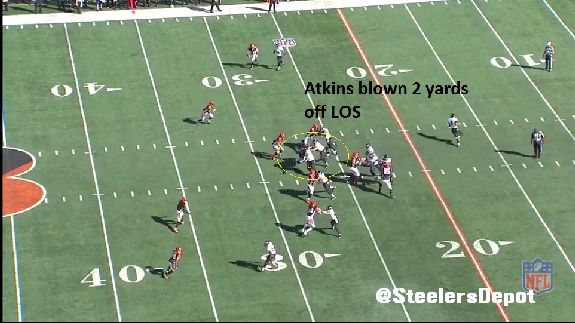 – What is most interesting is the Ravens’ consistent breakdown versus “A” gap pressure. On three separate occasions, whenever the Bengals’ inside linebackers lined up over the “A” gap, the Ravens would pinch but leave a defensive tackle free. The Bengals usually dropped at least one linebacker, creating pressure while still providing coverage.

On the first two instances, one of which I have shown below, the DT ended up one on one with the running back. 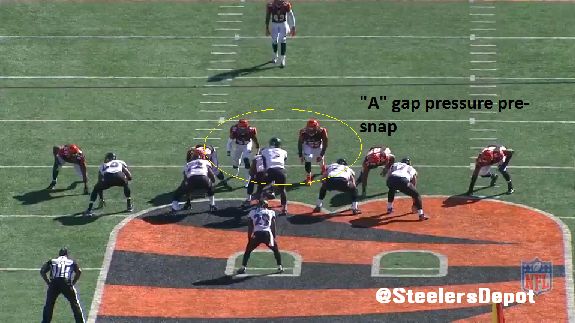 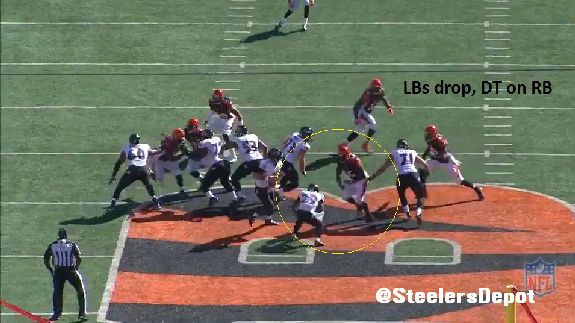 On the third, the Ravens were in empty, leaving the tackle to rush freely. 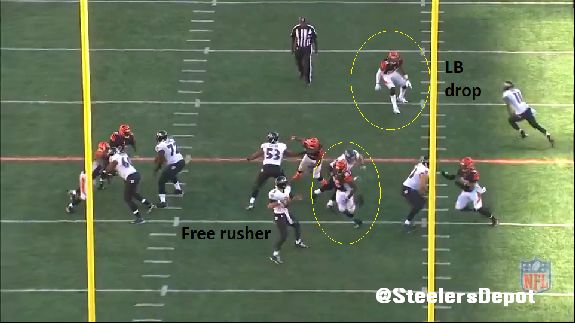 If I’m the Steelers, I’m showing the “A” gap blitzes I did last week but routinely dropping out of them. Slant a defensive end inside to attack the B gap and hopefully collapse the pocket. Keep using it until – or if – the Ravens adjust.

– The interior defensive line continues to be strong. Haloti Ngata is now a defensive end with Brandon Williams plugging the middle. Williams is a kid who really jumps off the page. Big dude, 6’1 335. Love his power and leverage, partly built-in by height, the other part strength. And he can move, too.

Probably my favorite play of his shown below. Strong at the point of attack, forces the runner to bounce the run, sheds his blocker, finds the runner, and makes the tackle.

He’s a young guy still learning. This is his first year as a starter. But I’m really impressed. Throw in Ngata, Timmy Jernigan, and DeAngelo Tyson, and you have a defensive line that regularly wins at the line of scrimmage.

Here’s Ngata and Pernell McPhee collapsing the lane. Interior line for the Steelers will be critical. Combo blocks are going to have to be perfect. Need to get a good chip from the frontside lineman to allow the backside blocker to reach and secure. 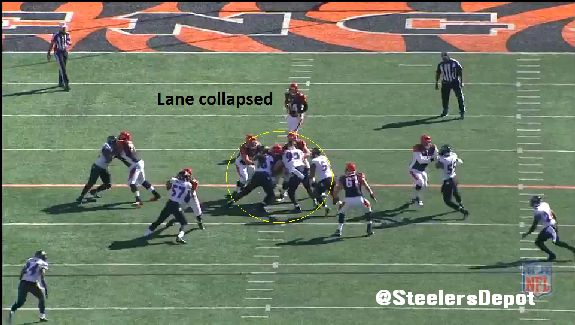 Terrell Suggs only has 3.5 sacks but is always the Steelers’ biggest headache. He’ll come to play.

– Inside linebacker Daryl Smith looks to be having a monster season. Big hitter who can shed blocks and is rarely off the field, he’s second on the team with 70 tackles. Watch Smith take on this block correctly from the guard. Makes contact with his inside shoulder, keeping his outside arm/hand free. Works off the block and tackles Bernard. Singularly makes this play. 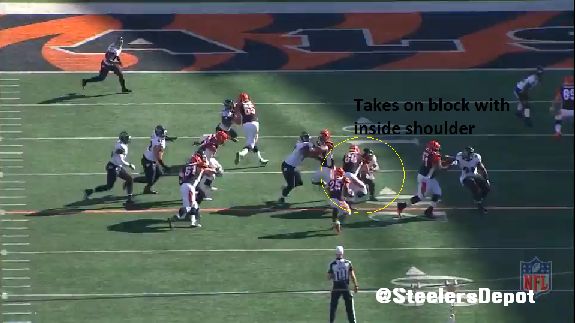 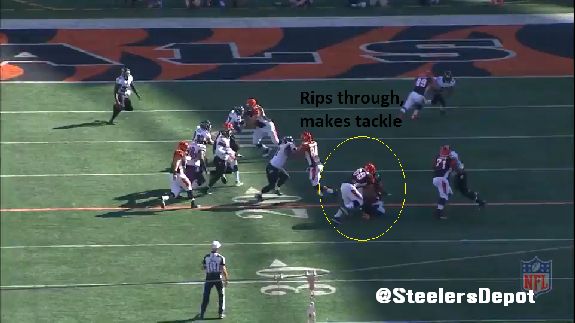 – In the secondary, Dominque Franks missed two tackles. LaDarius Webb may have a tendency to open the gate too late and is susceptible to getting burned. Matt Elam is a two phase player who starts at safety and runs down kicks.

The secondary has just one interception. And that came via Jimmy Smith, who won’t be playing tonight. Smith played over 96% of the defensive snaps during the year; no other Ravens’ cornerback is above 51%.

– Jacoby Jones will return kicks that are even 8-9 yards deep in the end zone. Lot of trust in himself. Juszczyk serves as an upback.

– Justin Tucker has attempted six kicks of 50+. Made three with a long of 53.

– One player who caught my attention on special teams. Anthony Levine is a third year kid from Tennessee State who flies down the field covering kicks. Tied for the team lead playing 146 snaps on special teams.

203 pounds but extremely fast. Wears #41, think of him as a slightly larger Antwon Blake.

The Ravens have a couple core special teamers. Levine, Albert McClellan, and Zach Orr have a combined 44 snaps on defense but a total of 438 on special teams.