The Pittsburgh Steelers are on a bye this week, but they’ve managed to move up to the fifth seed in the AFC thanks to the Oakland Raiders beating the Kansas City Chiefs Thursday night.

The Steelers and Chiefs currently have identical 7-4 records, but the Steelers are now the higher seed entering the weekend thanks to them having a higher winning percentage in conference games played.

Should the Cincinnati Bengals lose Sunday to the Houston Texans, the Steelers will enter Week 12 as the AFC North leader and the No. 3 seed in the AFC.

As far as other games go this weekend that will be of interest to Steelers fans, it will of course be helpful if the Baltimore Ravens and Cleveland Browns both lose. The Ravens will travel to play the New Orleans Saints on Monday night while the Browns with travel to play the Atlanta Falcons on Sunday.

In addition to those games, Steelers fans probably want to root for the Denver Broncos to beat the Miami Dolphins and also hope that the St. Louis Rams can beat the San Diego Chargers. 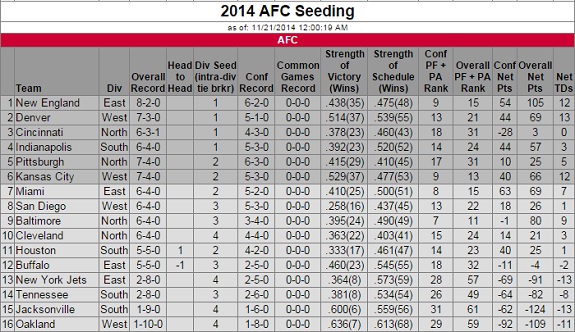