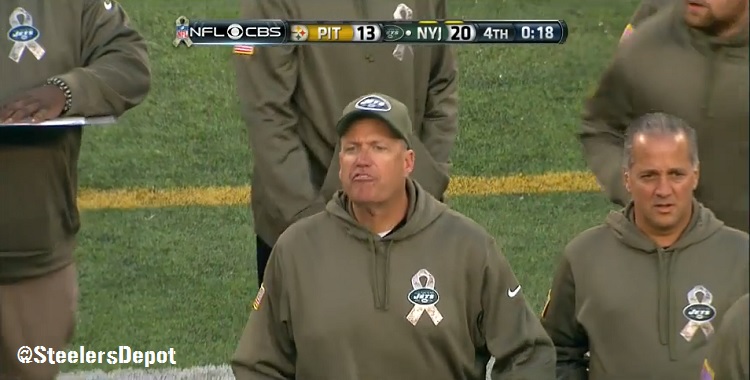 As expected, it was reported Friday that New York Jets linebacker Jason Babin has been fined $16,537 this week for his after-the-whistle hit Sunday on Pittsburgh Steelers quarterback Ben Roethlisberger.

Babin hit Roethlisberger and knocked him down after the officials had blown the play dead because of a delay of game call penalty. Roethlisberger bounced right up from the late hit and he and several Steelers offensive linemen took exception to Babin’s actions.

Babin said earlier in the week that he expected to be fined for his late hit that drew an unnecessary roughness penalty and that he would appeal it once it is handed out.

“I think it looked a lot worse than it was,” Babin said Wednesday. “Hopefully once they hear the appeal, cooler heads will prevail.”\

Babin wasn’t the only Jets player to lose money this week as quarterback Michael Vick was fined $8,268 for unsportsmanlike conduct. Vick was flagged for flipping the football at Steelers cornerback Williams Gay after he was tackled for a five yard loss with less than two minutes remaining in the game.

Jets head coach Rex Ryan has also been fined $100,000 for his post-game profanity that may have been directed at an official. Television cameras caught the Jets head coach yelling profanity as he walked on to the field immediately after the game had ended. Ryan is a three-time offender and that is why his fine is so high.