Many have been critical of fifth-year outside linebacker Jason Worilds throughout his career, and that criticism has only intensified after he parlayed a strong half-season into a nearly $10 million transition tag, under which he is currently playing.

While he has played well sporadically throughout the season, he has struggled to find consistency. He may have a half of strong pass rushing, but contribute little in the second half. He may play the run well in one game, and in the next, fail to hold the edge consistently.

Last week’s victory over the Houston Texans was certainly his finest game of the season, however, and perhaps one of his better games for the Pittsburgh Steelers overall.

Worilds came out strong immediately, making an impact on the Texans’ first three plays of the game and nearly forcing a three-and-out on his own. On first down, with Houston backed up in its own end, the left outside linebacker worked laterally off the edge against the tight end and filled the hole to tackle Arian Foster as he tried to run off right tackle.

On second down—once again in the 11 personnel—Foster tried to run up the left side before being forced to cut back. Lawrence Timmons was first to initially pen the back in, but Foster was able to juke past him and Worilds was the one to close, making the tackle after a one-yard gain.

Facing third and six, Ryan Fitzpatrick dropped back to pass from his own 10-yard line, with only the offensive line staying in to pass protect. Worilds rushed off the left side, pushing right tackle Derek Newton into the backfield. The pass rusher nearly got a hold of Fitzpatrick, but the quarterback ducked and sought shelter by fleeing behind his right tackle. From that point, he was able to flush out to his right and complete the third-down conversion.

Early in the second quarter, the Texans were driving, knocking on the edge of the red zone, but facing a third and eight. With Newton overextending to the outside, Worilds was able to knock him back and cut inside, getting pressure on Fitzpatrick and forcing a poor throw for an incompletion. 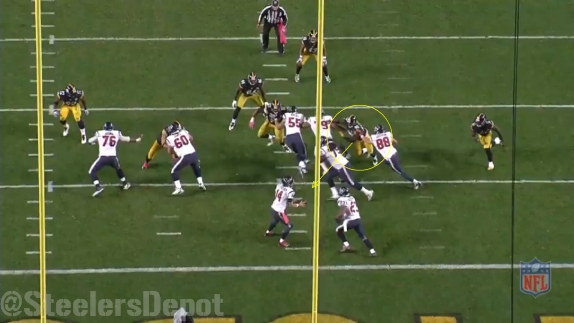 Late in the second quarter, with the Texans once again backed up deep in their own end, Houston attempted to pull Newton and reach block with the tight end, but Worilds easily penetrated into the backfield. He was on Foster immediately, despite the fact that he tried to juke out of a tackle, and, with Sean Spence, was able to force a fumble.

Worilds was in on yet another turnover just a few seconds later when Brett Keisel managed to deflect a pass, then intercept a second deflection. While Keisel’s reaction time to get his hand in the air is admirable, it was the rest of the defensive front line, particularly Worilds and Cameron Heyward, getting pressure that forced the bad decision.