The play of fifth-year center Maurkice Pouncey this year must be putting the Pittsburgh Steelers front office at ease after they elected to make him the highest-paid player at his position based on annual average salary.

Even though he made the Pro Bowl in each of his first three seasons before 2013 was wiped out with a significant knee injury, Pouncey may be playing the best football of his career now.

Whether that’s just growth that we were robbed of seeing last year, the influence of Mike Munchak, the intangibles of having guards of the quality that he now has to work with, or a combination of all of the above, Pouncey is helping turn this version of the offensive line into the best the team has had in the better part of a decade. 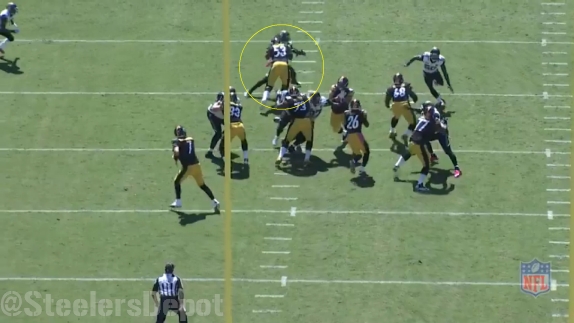 Although he’s been nothing short of stout in pass protection, the bulk of his heavy lifting this season has been on the run, and the Steelers have been more active this year in getting him out in space and on the move. This is what we see here in the still above, with Pouncey blocking down on the free safety at the second level.

As has been discussed a number of times already this week, though, the center’s highlight of the game as surely the fold block around right guard on Paul Pozluszny that helped free Le’Veon Bell for a 29-yard gain

Blount made up for it on the next play with a first down on a screen pass, but Pouncey helped surrender a sack subsequently. Though Ben Roethlisberger had the opportunity to get rid of the ball or escape, rather than hold on, Arthur Jones and Ziggy Hood were able to collapse the interior on Pouncey and Foster, with Pouncey’s man, Jones, ultimately breaking through and getting the sack.

Late in the first half, Pouncey this time ran a fold block to the left side working with Foster on a run by Blount that went for nine yards. Of course, it was Pozluszny once again that Pouncey blocked on the play. But Blount cut back upfield to the right to gain most of his yardage as it is after the backside linemen were slow to clear out their assignments. 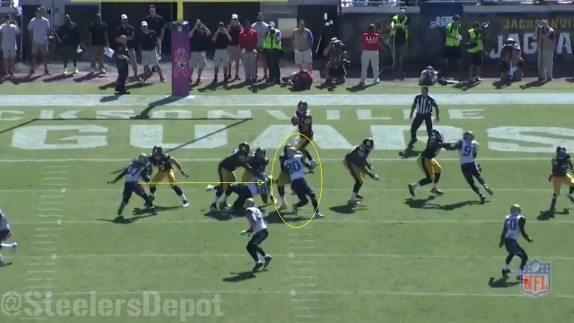 With the Steelers backed up in their own end on third and long early in the third quarter, Pouncey picked up this scoop block on the stunting left end, buying Roethlisberger time to find his receiver open down the field to move the chains.

A few plays later, he worked a combination block on Jones and a linebacker to clear up space in the middle for Bell for about nine yards. Plays such as these have become the norm in Pittsburgh this season thanks to the work of Pouncey and the other linemen.