Pittsburgh Steelers right tackle Marcus Gilbert has been playing better football over the past three weeks after getting his fourth season off to a bit of a rough start in pass protection.

Having been about equally as strong in run support and in pass protection since then, his settling down, and staying healthy, is allowing the offensive line to solidify in a way that it hasn’t been in a while.

One of the areas of improvement in his game this year has been finding his target when on the move, which is usually a more difficult assignment for the larger offensive linemen.

He didn’t have much issue chasing down linebacker Paul Pozluszny and sticking to him on this last first quarter carry. It ended up a bust after the safety came in late and clogged the running lane. The play design left the backside end uncovered, and Maurkice Pouncey couldn’t adjust to the defensive back in time. 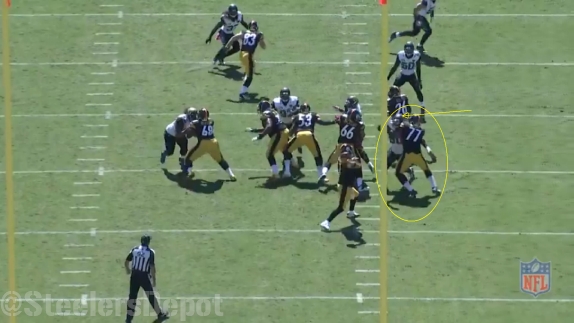 Another area in which I at least have seen improvement has been in the category of mental resilience, responding and reacting to mistakes rather than panicking or giving in. Late in the first quarter, he was caught wide by the end attacking his inside shoulder, but he was able to adjust and eventually settle down, allowing the pass to be completed for a 15-yard gain.

He did get bowled over by the defensive tackle on third and goal, however, after being late to the tackle-end stunt. Caught off-guard, both Gilbert and the lineman fell to the ground. Despite that, Ben Roethlisberger was easily able to flee the pocket, but he chose to hold on to the ball and risk taking a sack—which he eventually did—rather than throw the ball away so close to the goal line.

The right tackle got some revenge later in the second quarter on this five-yard run, however, when he was able to run the defensive lineman completely out of the play. 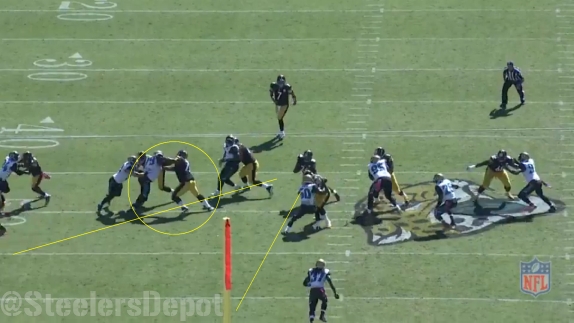 The offensive line opened up a big alley for Le’Veon Bell in the third quarter on this play above, which allowed him to go unimpeded most of the way on an eight-yard gain. Gilbert’s turn and seal on the lineman secured the right side of the hole.

And for somewhat comedic effect, here is Gilbert engulfing a defensive back attempting to brace for the block on an end run by Dri Archer. I suppose it’s closer to a clothesline than a block, though it wasn’t flagged, obviously. Either way, it kept one defender from making a play.