The Pittsburgh Steelers lost both Ziggy Hood and Al Woods in free agency, and they replaced those losses with free agent Cam Thomas. Thomas continues to start at left defensive end.

The reason that the previous statement is preceded with a qualifying verb, however, is because there is, and has been, speculation that that position is far from permanent.

And it’s not. While he may have had a couple of solid games in the preseason, he has accomplished little during the regular season, despite logging close to 200 snaps already through the first five games.

In the meantime, Brett Keisel has actually been playing slightly more, than Thomas, while rookie Stephon Tuitt is beginning to be talked about by people as significant as Dick LeBeau and Mike Tomlin as a player who could be seeing more snaps in the very near future.

Those comments come after the rookie second-round defensive end logged what possibly should have been credited as his first career sack—or half-sack—though the official scorers deemed that Jason Worilds was entitled to full credit on the play. 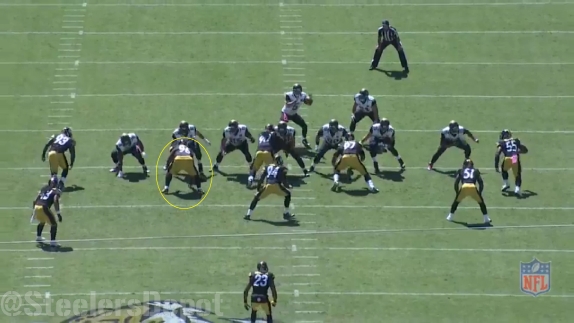 But if any further reason be needed to get the rookie some more playing time, all one needs do it just take a look at some of Thomas’ game film.

Take this still above, for example, which comes from the first defensive snap against the Jacksonville Jaguars, and compare how slow off the ball he was in comparison to the rest of the defense. Nose tackle Steve McLendon has already engaged with the center by the time Thomas finally broke his stance.

As the opening drive wore on, the Steelers transitioned from their base defense to the nickel, but in doing so they subbed in Keisel, taking out McLendon and moving Thomas to the nose for one snap.

The result was him being handled soundly by a clean base block by the center, who drove him a step or two backward and held him there before turning him and shielding him away from the run.

Thomas came off the field on the next play as the team added a defensive back. After all, what’s the point of three defensive linemen if that is what the nose tackle is going to accomplish?

Midway through the third quarter, after a 20-yard run on the first play of the drive, the Jaguars ran Storm Johnson off left end for six yards. Thomas must be given credit on this play for working down the line, freeing himself of the blocker, and tripping up the runner to prevent what would have been a bigger play.

But that play has kind of been one of his prime highlights of the season thus far. He did ‘pressure’ the quarterback once in the fourth quarter about five seconds after the snap, which forced a check down pass that wound up going for 12 yards, but that’s about it.