Pittsburgh Steelers center Maurkice Pouncey’s return to the lineup after missing the 2013 season has made it easier on the rest of the offensive line to take on opposing defensive lines that are tough up the middle.

This was a problem last year, particularly against 4-3 teams, but as we’ve seen so far through the preseason and the regular season, the line is more in command of the line of scrimmage now than it has been in some time.

It may just have been a while since I’ve seen him play, but it also seems to me that Mike Munchak is taking greater advantage of his mobility from the center position than previous offensive line coaches and offensive coordinators have. Pouncey was particularly successful this week against the Tampa Bay Buccaneers in the running game.

Take this pull block on first down on the Steelers’ second offensive possession, for example. Le’Veon Bell failed to advance much past the line of scrimmage by play’s end, but that’s no knock on the center here.

With Cody Wallace reach blocking to his right on the one-tech, Pouncey bailed out and around the left guard, picking off the advancing Lavonte David. If it weren’t for the safety charging in on the play from the snap, it may have been successful. 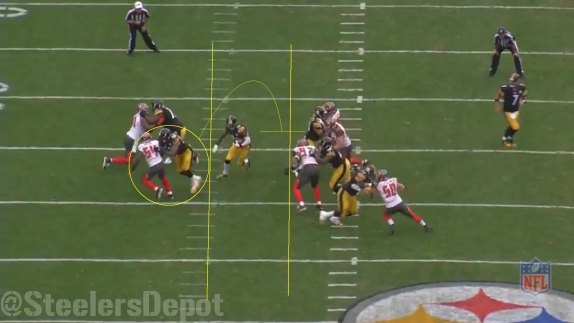 The Steelers had Pouncey pulling again later in the first quarter, this time to his right, with David DeCastro on the reach block, but the center once again picked off David, blowing him out of the hole and well out of the play as Bell was able to hit the hole for 16 yards.

Pouncey and Wallace worked in tandem two plays later on another carry that went up the middle for a healthy gain. The two worked a double team on the defensive end with the center looking to veer block to the second level, but when David tried to loop around the left guard, Wallace adjusted and Pouncey stayed on the lineman. The result was a massive hole up the middle and easy running for Bell. 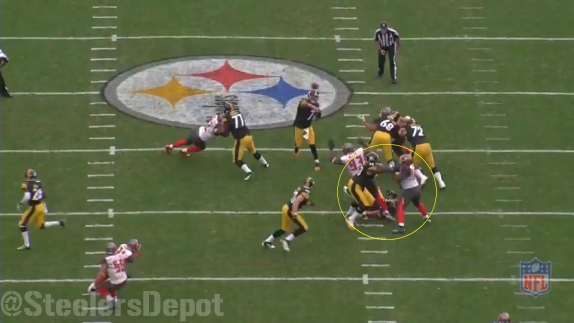 The fifth-year center was also solid in pass protection on the afternoon, even if his run blocking was his stronger suit, though that tends to be the case any time a quarterback is sacked five times in a game.

He has yet to allow a sack himself this year, however, and he was certainly far from doing so on this play, which came directly after the previous play examined. Pouncey held off the rusher well out of harm’s way for about four seconds before Ben Roethlisberger delivered a 27-yard pass down the field.

The entire line deserves credit for this run, however. It may have been one of the most complete blocking displays from the line all year, or even over the past two years. It also got the Steelers out from the shadow of their own goal line.

For his part, Pouncey chipped on the defensive tackle before picking off David and allowing LeGarrette Blount to escape to the second level virtually untouched.

It seems to me that Pouncey is actually starting to play into his reputation, having been a three-time All-Pro in three seasons. He is a more complete and active player than he has been, and shows well in picking up stunts when left uncovered. Hopefully he’s answering the questions of those who would rather have seen him walk than pay him.