First-year wide receiver Justin Brown continues to be the primary slot receiver for the Pittsburgh Steelers through four games, though veteran Lance Moore did see a good handful of snaps a week ago against the Tampa Bay Buccaneers.

As I detailed yesterday, however, that doesn’t mean all that much, considering all targets outside of the top four—on offense—have combined to catch nine passes for 72 yards.

Seven of those receptions have come from Brown, totaling 59 yards. He had one reception for five yards last week, but he also dropped a would-be touchdown pass, and quite frankly whether or not he held on to his lone reception is also in dispute.

That drop occurred on the Steelers’ third possession after giving up two sacks and losing a fumble, then going three-and-out, on their first two possessions. The offense drove steadily down the field once a big third-down conversion from Markus Wheaton got them going.

On first and goal, the Steelers tried to run an end around to Dri Archer, but it only went for a yard. A short pass to tight end Heath Miller on second down also gained only a yard thanks to the quick-closing safety.

On third and goal, Ben Roethlisberger looked for his slot receiver in the end zone, who motioned from right to left pre-snap. Though the cornerback had coverage right behind him, the pass went through Brown’s hands without any real interference. The Steelers instead had to settle for a field goal. 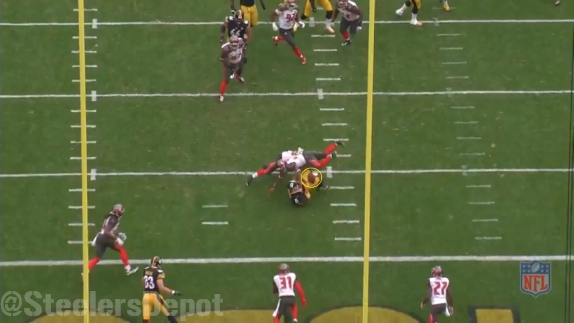 Fortunately for Brown, the offense quickly got back down the field on the next drive, facing another first and goal from the eight-yard line. Brown got the first look from near the goal line, with Roethlisberger finding him cutting to the middle of the field between two receivers. 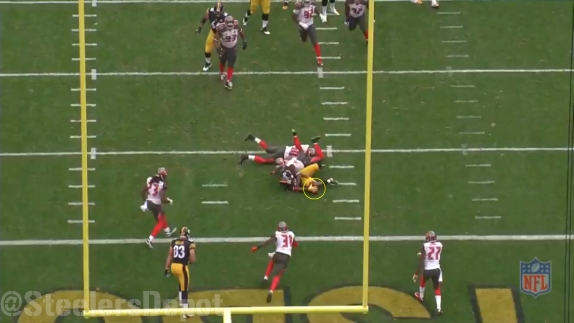 However, a hit from linebacker Dane Fletcher clearly jarred the ball loose before Brown fully completed the catch, and as can be seen above, the ball was on the ground before he ever regained possession. 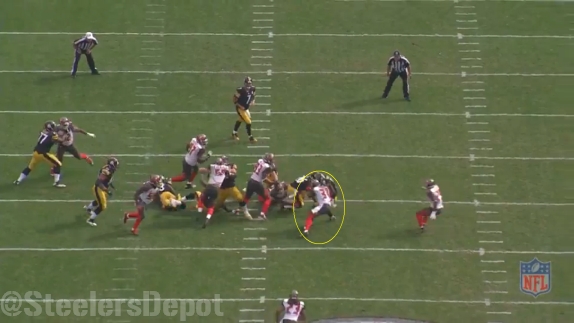 But, of course, Brown isn’t necessarily in the game so frequently for his receiving process. He is the team’s best blocking wide receiver, which helps account for his nearly 200 snaps through four games. This big shoulder charge on the safety on a running play serves as an example of his primary function for the offense. He would probably be back on the practice squad without showing this ability.

Above is another example of his blocking, this time on the perimeter and out in front of a run. This particular carry only went for five yards, but these are the blocks down the field that separate 15-yard runs from 50-yard runs.

Which kind of makes me wonder why the Steelers didn’t have Brown out on the field early in the fourth quarter on Wheaton’s end around. Instead, they had the fullback in the game to sell the run fake, but the receiver was easily chased down for a loss of seven.