Defensive end Cameron Heyward was the only player in the last game the Pittsburgh Steelers could count on to get to the quarterback with any kind of consistency—and even much of that was assisted by the coverage on the back end.

While he picked up his third sack in six games and generated a few other pressures, however, he wasn’t as consistent against the run. At times, particularly in the second half, I was inclined to fault the nose tackle, but Heyward had his mistakes against the run himself. In all, though, he was one of the team’s better defenders against the Cleveland Browns.

Obviously, Heyward got his day off to a good start when he ended the Browns’ opening possession by recording his team-leading third sack of the season.

Admittedly, it was essentially a cover sack, but nevertheless the defensive end—playing on the left side—was able to beat the right guard with a late inside move and sacked Brian Hoyer, which is not something that has happened very often this year. 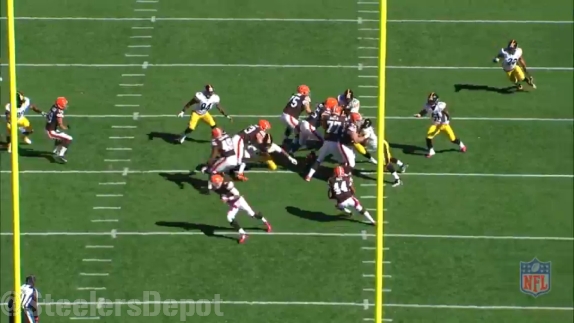 As mentioned above, however, Heyward’s performance against the Browns’ running game was quite erratic at best, and he was taken out of a number of plays. On the first play of the Browns’ second drive, he was knocked to the ground by the left tackle, though Lawrence Timmons was already there to fill the hole.

Early in the second quarter, Heyward was back on the pass rush, knocking Hoyer down and forcing an incompletion—though it was, again, a coverage play.

As the play dragged on, he was eventually able to get underneath the left guard and drive him back into the pocket, finally releasing and closing in on the quarterback. Hoyer let the ball loose well out of bounds, but it was Heyward’s pressure that forced the throwaway, regardless of how long it took to get there.

Midway through the third quarter, at midfield on a first down play, Heyward was back on the left side of the defense when Isaiah Crowell ran the ball in his direction.

His penetration upfield through the right guard forced the running back to take the hole to his inside, but Heyward made a nice play to spin off the lineman and make the tackle on his own, rather than simply funneling him to another defender to make a play.

At the end of the quarter, however, the entire defensive line was pushed around by the Browns’ front on first and goal from the eight-yard line.

The Steelers had their starting personnel on the field minus the right outside linebacker position, meaning Heyward was at home on the right side. Joe Thomas lined up head on from him as the line shifted to the right on the snap. Tate took the handoff and went left. By then, Thomas already had Heyward off-balance and was able to lock him inside, allowing the back to find a hole into the end zone.